All of Beam’s trademarks are here – single-word answers, short and pithy clues, mention of Queen and lots of tongue-in-cheek double-entendres. It’s all thoroughly enjoyable. It took me longer than it should have because I initially wrote in the wrong answer for 7d.
Tell us how you got on and please take the time to click on one of the stars below to register your enjoyment.

1a  A peer turned to Conservative blue peerage (11)
{ARISTOCRACY} – a word meaning peerage comes from running together A, the reversal (turned) of a title given to some male peers, TO, C(onservative) and a synonym for blue or risqué.

9a  Slow movement of stake gripping desperate character (7)
{ANDANTE} – a slow movement in a piece of music is formed by putting a betting stake around (gripping) the desperately tough character from the Dandy comic.

10a  Provokes through obscenity, almost (6)
{INCURS} – a verb meaning provokes or attracts is built from a preposition meaning through or by way of followed by a spoken obscenity which loses its final E (almost).

12a  Play endless record by Queen in can (7)
{DISPORT} – here’s Beam’s signature – a reference to Queen. A verb meaning to play or gambol comes from a record without its final C (endless) followed by another word for can or container with R(egina) inside.

13a  Bug Russian government losing head for good (7)
{GREMLIN} – the large complex off Red Square which houses the Russian government (and which is used as a shorthand way of referring to that government) loses its initial letter which is replaced by G(ood) to make an unexplained bug (in a piece of software, for example). 15a  Decipher stone tablet after time passed (9)
{TRANSLATE} – a stone tablet, which school pupils used to write on many years ago, comes after T(ime) and a verb meaning passed or elapsed.

17a  Bar supporter, one’s moved towards end (9)
{BRASSERIE} – start with a female support garment and move the I (one) towards the end to make a bar where food as well as drink is served.

20a  Hop, skip and jump (5)
{CAPER} – hop, skip and jump is what the field event now called the triple jump used to be called. I think that it’s just being used here as a cryptic definition of a verb meaning to dance around playfully.

22a  Vulgar slapper after drink, first to finish (7)
{UPSTART} – the definition is vulgar or pretentious. Put a promiscuous woman or slapper after . another word for drink with its first letter moved to the end. [Thanks to Gilbert for sorting out the correct  wordplay.]

24a  Look North? (7)
{BEARING} – double definition, the question mark indicating that North is just an example of the second.

25a  One may fetch stick keeping cool (6)
{CANINE} – an animal that likes fetching things (and then chewing them up rather than giving them back, if mine is anything to go by) is made from a stick (that may be used to aid walking or as an instrument of punishment) around (keeping) an adverb meaning cool or fashionable. 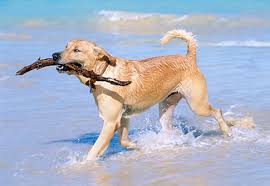 26a  Classy pair seen on some women (7)
{TWINSET} – LOL – it’s double-entendre time again. This is just a suggestive cryptic definition of a woman’s matching cardigan and jumper.

27a  Go around Romeo in nude, strangely naked (11)
{UNVARNISHED} – a verb meaning to go or disappear has the letter for which Romeo is used in the Nato phonetic alphabet inserted (around), then all that goes inside an anagram (strangely) of NUDE to make a synonym for naked or pure.

5d  Disease caught from insects (7)
{RICKETS} – remove the C(aught) from noisy insects to leave a disease caused by a deficiency in vitamin D.

6d  Completely love fabulous bird lifting part of bloomers (7)
{COROLLA} – this is a word for the inner circle of petals in flowers (part of bloomers). String together a) a synonym for completely, b) O (love) and c) a mythological gigantic bird featured in the Arabian Nights. Finally reverse the lot (lifting, in a down clue).

7d  Supporter of all things wicked? (11)
{CANDELABRUM} – I confidently wrote in candlestick for this, then ended up staring at an almost blank SW quadrant before I twigged that “all” in the clue meant that this object is designed to support many, rather than just one, of the wicked things.

8d  Creator who made light of his work (6)
{EDISON} – this is the surname of a prolific American inventor. Although he didn’t invent the electric light bulb he was the first to produce and market a reliable long-lasting one.

11d  Endlessly frightened before opening question (11)
{INTERROGATE} – start with a phrase (2,6) meaning frightened, then drop the last letter (endlessly) and add an opening (into a field, say).

16d  Provokes cricketers holding England following superb runs (9)
{ACERBATES} – cricketers (not bowlers, the others) contain E(ngland) and that then follows an informal word for superb and R(uns) to make a verb meaning provokes or irritates. We’re more used to seeing this word preceded by ex- when it means to make worse.

19d  Fires up lacking energy and strength (7)
{STAMINA} – a verb meaning fires or energises is reversed (up, in a down clue) and the E(nergy) is taken out to produce a word meaning strength or staying power.

23d  Threepenny bits, occasionally wooden (5)
{TREEN} – the odd (occasionally) parts (bits) of the first word form an archaic adjective meaning wooden. Now if only I knew what threepenny bits were rhyming slang for I might be able to find an illustration …