Hola from the Vega Baja. Maybe it’s just me but thought this was a tad harder than the last few Wednesdays, but none the worse for that! Maybe Jay doesn’t want me to get complacent! Enjoyable though and with enough easier clues to give you an ‘in’ to the puzzle for the trickier bits.

1a    A drug dealer’s yacht, and a rope thrown out (10)
{APOTHECARY} – This is an old name for a drug dealer, or pharmacist, and it’s an anagram (thrown out) of YACHT and A ROPE.  Nice anagram to start you off!

6a    A nuisance is unfinished mirrors (4)
{APES}  -The definition is mirrors, as in copies. Take A (from the clue) and follow with a nuisance without its last letter (unfinished).

10a    Gather there’s action starting in valley (5)
{GLEAN} – Take a word for a valley (Scottish) and insert A (Action starting) and you’ll get a word for gather or harvest.

11a    Rogue makes refund including half of profit (9)
{REPROBATE} – This rogue is made up of a word for refund with half of the word PROfit inserted. Pommette always says I’m one  of these!

12a    A daughter boarding flight for a prank (8)
{ESCAPADE} – A (from the clue) and D(aughter) inserted into (boarding) a word for flight or getting away gives you a prank.

13a    Take exception, being almost sober (5)
{DEMUR} – This is a word meaning take exception or disagree. Take a word for sober or decorous  and remove the last letter (almost).

15a    Extend thoroughfare through mountain (7)
{BROADEN} –Start with a Scottish mountain and insert a thoroughfare or street and you get a word meaning extend or widen.  Are we getting a Scottish theme? That’s 2 out of seven so far!

17a    Complacent, starts to get lost and ends run (7)
{SMUGGLE} – The well concealed definition here is ‘run’, as in avoid customs! Take a word for complacent (4) and follow with the first letters (starts) of Get Lost and Ends.

19a    One initially tense during approaches is visibly upset (2,5)
{IN TEARS} – Not easy to explain! Start with I (one) and follow with a word for approaches or gets closer and insert (during) T (initially Tense) and then split the result (2,5) to gets a phrase which might describe someone who is visibly upset. 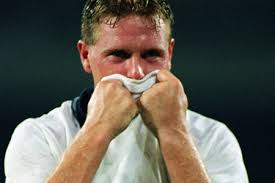 21a    Worker catches bus in order to save (7)
{HUSBAND} – This word meaning save or put aside for later use is one of Crosswordland’s usual workers (not ant, one of the others) with an anagram (in order) of BUS inserted (catches). I quite like the surface of this one.

22a    Muse a long time — and return books (5)
{ERATO} – One of the muses from mythology. Take a long time and add one ot the testaments of the bible reversed (return books). Is this a bit of a chestnut?

24a    Scratched, but serious in intent (8)
{ENGRAVED} –A word meaning scratched or etched out is made from inserting a word for serious or earnest into an intent or aim.

27a    Soldiers on a date, soldiers with time for change (9)
{AMENDMENT} – Soldiers are MEN. Take some and put them on (in?) A (from the clue) and D(ate). Follow with more soldiers and T(ime) and you get a change. Not sure I’ve got this right or that it works! Weakest clue in the whole puzzle IMO.

28a   Bird shot (5)
{SNIPE} – Double definition. A game bird is also a word meaning to shoot from cover, often from a long distance. 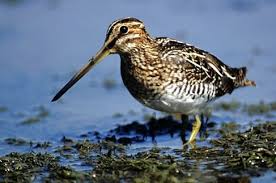 1d    Ship making a right turn (4)
{ARGO} –One of the favourite old ships (think Jason) is made from A (from the clue) , R(ight) and a word for your turn or attempt. Quite a clever clue but if I never see this old boat in a puzzle again I won’t be sad about it!

2d     Go too far regarding fire (9)
{OVERSHOOT} – Definition is go too far.  A charade of a word for regarding or about and a word for fire, a rifle perhaps.

3d    Hospital put girl up for shock treatment (5)
{HENNA} – H(ospital) followed by a girl’s name reversed (up in a down clue) gives a treatment for hair (shock).  I thought this a bit tricky, spent a while trying to work ECT into something! Shock – hair, yeah, OK, I can live with that!

4d     Short article on popular call at the theatre (7)
{CURTAIN} – A call in a theatre at the end of an act is a charade of a word for short or abrupt, A (article) and the usual 2 letter word for popular.

5d     Weapons charges must include one disheartened ecowarrior (7)
{RAPIERS} – These weapons are charges (by the police perhaps) with inserted (must include) I (one) and ER, (E(cowarrio)R disheartened).

7d     Bit of a hand to cover second song (5)
{PSALM} –Part of your hand with S(econd) inserted gives a religious song.

9d     Low spirits? Start drinking ancient spirits (8)
{DOLDRUMS} – Definition is low spirits or the blues. Start with D (start Drinking) and follow with a word for ancient or aged and then some spirits, apparently liked by sailors. Pommette is one sailor who certainly does like this stuff!

14d     Remove all traces of oil with a better process (10)
{OBLITERATE} – An anagram (process) of OIL and A BETTER gives a word meaning to remove all traces.

16d     Rock singer’s first suit (8)
{DIAMONDS} – This is one of the suits in a pack of cards. Take the precious stone for which ‘rock’ is a slang term and add S (Singers first). There’s also a bit of an allusion to Neil here perhaps – I’ll leave out the video though, that comes next! 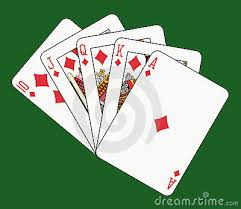 18d     Where there’s talk on the origin of wine? (9)
{GRAPEVINE} – Double definition. Where you might hear rumours and where wine starts its life. pommette’s found me this brilliant video, Marvin Gaye without the backing track – one of my all time favourites!

20d     Seamstresses boxing 1000 pins (7)
{SKEWERS} – These are pins on which you stick bits of meat for the barbeque. Take some seamstresses and insert (boxing) one of the abbreviations for thousand.

21d     Expensive hot drink and meal (4,3)
{HIGH TEA} – This is a meal taken late afternoon (a bit Scottish I think?). A word for expensive (?) followed by a hot drink taken at this time gives the meal.  Not at all sure about this one. 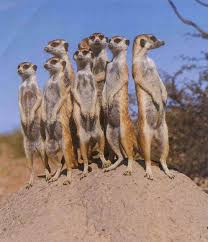 Oh well, the Scottish theme didn’t seem to develop or am I missing things?
I like the ones in blue but favourites are 16d and 18d.