Hola from the Vega Baja. This puzzle is living proof that it doesn’t have to be hard to be enjoyable. It’s one of Jay’s easier offerings but I had a great time solving it and there’s quite a lot of blue today!

The clues I like most are in blue and the answers can be seen by highlighting the space between the curly brackets. Please leave a comment telling us what you thought.  You can also add your assessment by selecting from one to five stars at the bottom of the post.

1a    Look agitated following massacre (8,4)
{BUTCHERS HOOK} – This is a bit of rhyming slang for a look, usually used without the second word. If split (7,5) it’s a word for agitated, in the sense of stirred following a word which can mean to massacre. For some reason this one took me a while! I’d got the first word meaning look but couldn’t work out what the rest of the clue was about – doh!

9a    The precursor to fire in which one cooks (6-3)
{FRYING PAN} –If you go from one bit of trouble to another you might be said to be out of this and into the fire! It’s also something used for cooking. 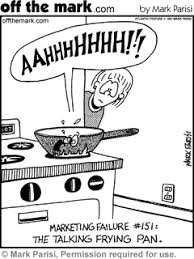 10a    Rejected story covering degree communication (5)
{EMAIL} –Take the usual untrue story and reverse it (rejected) and insert (covering) an abbreviation for a degree to get a form of electronic communication.

12a    Broadcast late (mainly) and never to the point (8)
{RELEVANT} – A word meaning ‘to the point’ is an anagram (broadcast) of LAT (LATe mainly) and NEVER.

13a    Stiffener for the top of the bill before church (6)
{STARCH} – A stiffener used on shirts is made up of a word for the actor who is top of the bill followed by one of the abbreviations for church.

18a    Merry king’s rule for cabbage in salad (8)
{COLESLAW} –Shredded cabbage is a main ingredient in this type of salad. If split (5,3) it could be read as the merry old King’s rule. This one raised a smile! 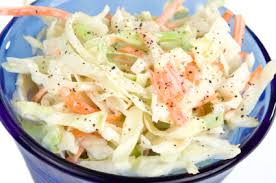 19a    Royal Navy reserve finally in bed — for a bit of brass (6)
{CORNET} –This bit of brass is a brass musical instrument. It’s the abbreviation for the Royal Navy and E (reservE finally) inserted into a word for a baby’s bed.

21a    Blow share on dinner — with no starter (8)
{UPPERCUT} – A blow in the sense of a thump or a punch is the definition. Take a late evening meal and remove the first letter (with no starter) and follow with a word for a share or portion.

26a    Food account put into good French (5)
{BACON} – Take the usual abbreviation for account and put it into the French word for good to get some food which makes great butties. Especially with HP sauce, although I seem to remember BD once saying he’s a Daddies man! 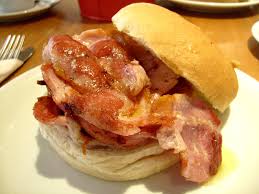 27a    Where refreshments end a great wrong? (3,6)
{TEA GARDEN} –This is somewhere you may take refreshment (no, not the pub) and it’s an anagram (wrong) of END A GREAT.

28a    All the same? (12)
{NEVERTHELESS} – I’m not sure how to describe this one so any suggestions gratefully accepted! It’s an all-in-one clue and the answer is a word which means ‘All the same’ as in ‘even so’ or ‘however’. If split (5,3,4) it’s a phrase which could be read as meaning always the same. At least I think it’s something like that.

1d    Batters food on counters (7)
{BUFFETS} – A word meaning batters or bumps is also food laid on counters where you go to help yourself.

2d    Ingredient of healthy meals? (5)
{THYME} – The answer is a culinery herb which also has medicinal properties so the clue is a quite clever sort of all-in-one! It’s hidden (ingedient of)  in healTHY MEals. Why is it that when I try to capitalise letters like this MSWord automatically puts them back in lower case? It’s probably a useful feature but highly irritating when blogging! 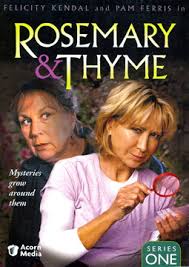 3d    Carefully selects tools to support labourer (4-5)
{HAND PICKS} – A phrase meaning carefully selects is made up of one of the usual workers followed by (support in a down clue) a tool used for breaking ground, which may be used by said labourer.

4d    Ready reckoner is proof enough — initially (4)
{RIPE} – Ready, in the sense of ‘ready to eat’, is made from the first letters (initially) of the other words in the clue.

5d    Longed for Attila, say, to suppress rampant greed (8)
{HUNGERED} – The people of which Attila was leader followed by an anagram (rampant) of GREED gives a word meaning longed or yearned.

6d    Honours even at first, but carrying too much weight (5)
{OBESE} – Some honours (remember it’s plural) followed by E (Even at first) give a word to describe someone who is very overweight.

7d    A vehicle loaded into orbiter may supply snack (8)
{MACAROON} –A type of light, baked confection is made by taking the earth’s satellite and inserting A (from the clue) and a vehicle. Not had one of these for years! 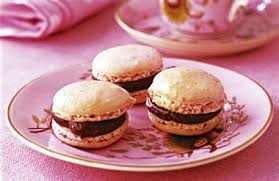 8d    Dishes delayed in case of prayers (6)
{PLATES} – Take PS (case of PrayerS) and insert a word for delayed or overdue and you’ll get a piece of crockery on which you might serve some 7d’s.

14d    Pepper that’s sort of special around mid-Wales (8)
{ALLSPICE} – This type of pepper, also known as Jamaica pepper, is an anagram (sort of) of SPECIAL and L (middle letter of WaLes).

16d    Two firms admitting hotel student consumed sweet (9)
{CHOCOLATE} – This is a very popular type of sweet or confectionary. Take two of the usual abbreviation for firm, insert H(otel) and then follow with a letter for a student and a word meaning consumed. A little complicated to explain so I hope that made sense!

18d    First of children with spouse is nearly 6 (6)
{CHUBBY} – C (first of Children) followed by an affectionate term for husband (spouse) give a word to describe someone who is a bit overweight but not as fat as 6d.

20d    They may lose heart with harangues from such rulers (7)
{TYRANTS} –TY (T(he)Y may lose heart) followed by a word for harangues or tirades gives some very autocratic rulers.

22d    Compass needed in mountains (5)
{RANGE} –Double definition. This compass or extent is also a group of mountains.

25d    Cure for a dry sense of humour (4)
{SALT} – This is a type of cure, as in preserve, which is popular in Spain for preserving fish. . I admit to having no real idea what it has to do with a sense of humour, dry or otherwise so any pointers welcome!
Thanks to Big Dave for informing me that Chambers has the definition ‘dry or pungent wit’! New one on me and shows I really MUST get a copy of Chambers