This is somewhat of a mixed bag today. It has some really good clues but a few that I thought were a bit “iffy”. There are also a high number of anagrams (my particular bugbear). Let us know your views in a comment.
If you want to see an answer just highlight the space between the curly brackets under the clue.

6a  Selectively taste wife’s dish (4)
{STEW} – hidden (selectively) in the clue is a dish.

10a  Heard Queen’s restricted by unusual diet (5)
{TRIED} – a verb meaning heard, as the judge did, is R(egina) contained in an anagram (unusual) of DIET.

12a  Food time (8)
{PORRIDGE} – double definition, the second being another slang term for a stretch of time inside.


13a  River awfully fast — these may help (5)
{RAFTS} – start with R(iver) and follow with an anagram (awfully) of FAST to make floating platforms.

17a  Second musician higher in pitch (7)
{SHARPER} – S(econd) is followed by the player of a stringed instrument (not the usual word but recognised by Chambers) to make a comparative meaning higher in pitch.

19a  Swear about man’s habits (7)
{CUSTOMS} – an informal verb meaning swears or utters profanities contains a common male name (neither Dick nor Harry).

21a  Julius Caesar could be seen here and there entertaining leaders of all territories (7)
{THEATRE} – a place where you might see Julius Caesar (or part of King Henry IV) is constructed from THERE with the leading letters of All Territories inserted (entertained).

22a  Help legendary golfer stuck in river? On the contrary (5)
{SERVE} – on the contrary tells you to reverse the wordplay. So, instead of the golfer being inside (stuck in) the river, we have to stick R(iver) inside the nickname of a legendary Spanish golfer who died earlier this year.

24a  Note lawsuit’s response (8)
{REACTION} – this response is a charade of the second note in tonic sol-fa and a lawsuit.

27a  Chief’s armpit not fresh (9)
{IMPORTANT} – an anagram (fresh) of ARMPIT NOT produces an adjective meaning chief.

28a  Prevent state involvement, ultimately (5)
{AVERT} – a verb meaning to state (used much more in Crosswordland than elsewhere) is followed by the last letter (ultimately) of (involvemen)T.

30a  One studying for heaven’s sake? (10)
{ASTRONOMER} – this is a cryptic (?) definition of someone who studies the heavens. I think that it’s pretty weak – how about you?

1d  Orders book (4)
{ACTS} – double definition, the orders being statutes and the book being part of the New Testament.

2d  Developing resin: pros and cons (9)
{PRISONERS} – an anagram (developing) of RESIN PROS gives us what cons are a slang term for. Interestingly the answer intersects 12a.

4d  Dined out to keep Virginia occupied (7)
{INVADED} – an anagram (out) of DINED contains (to keep) the standard abbreviation for the state of Virginia to make a verb meaning occupied (a foreign country, for example).

5d  Rubbish films — they’re served up seasonally (7)
{TURKEYS} – double definition (and a possible comment on the films shown on TV over Christmas). This term is used for terrible films (apparently the film voted “worst ever” was called Plan 9 from Outer Space) although the “Oscar equivalents” for such movies are handed out each year at what’s called the Golden Raspberry Awards.

7d  One’s trapped by the female burglar (5)
{THIEF} – put I (one) inside (trapped by) THE and F(emale). A burglar is someone who makes an illegal entry with the intention of committing a crime and is not necessarily this, so I think a question mark or “perhaps” would have been useful.

9d  Transport union with new leader (8)
{CARRIAGE} – a union of two people has its initial M changed (with new leader) to make a form of transport. I’m not sure whether the juxtaposition of this with 25d is deliberate.

14d  Striking group of musicians? (10)
{PERCUSSION} – cryptic definition of a section of the orchestra where instruments are struck.

16d  The study of lines and solids, strangely grey to me (8)
{GEOMETRY} – an anagram (strangely) of GREY TO ME.

18d  Around start of October plum tree’s chopped up for fuel (9)
{PETROLEUM} – around the first letter of O(ctober) put an anagram (chopped up) of PLUM TREE to make a type of fuel.

20d  Runs away without initially emitting cries (7)
{SCREAMS} – a slang verb meaning runs away goes round (without, in its sense of outside) the initial letter of E(mitting).

21d  Time carrot’s uprooted — one’s likely to be on a farm (7)
{TRACTOR} – start with T(ime) and follow this with an anagram (uprooted) of CARROT to make what you may see on a farm. 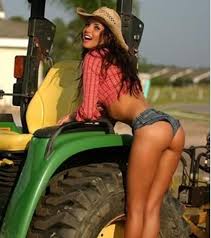 23d  Beginning to respect writer after I become more mature (5)
{RIPEN} – the first letter (beginning to) of R(espect) is followed by a writing implement after I.

26d  Is topless, kissing sailor’s heavenly body (4)
{STAR} – .. just when I thought that there’d be no picture opportunities .. Is topless just means (i)S without its initial letter in a down clue. This is next to (kisses, like a snooker ball) a slang term for a sailor to make what 30a might look at.