This was my first opportunity to review a puzzle from Dada, and what a great pleasure it has been.  As Paul in the Guardian this setter has a fearsome reputation, but he is somewhat kinder to us over here at the Telegraph!

9a    European river prepared for a rainy day? (5)
{CROAT} – this member of a European race is created by putting R(iver) inside the kind of outer covering that would prepare you for a rainy day

10a    Panda chewed a crop, eating insects (6,3)
{POLICE CAR} – panda was the name given to a patrol vehicle with white and black markings – put an anagram (chewed) of A CROP around some insects 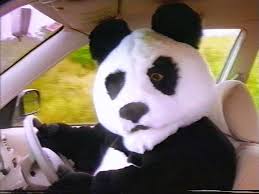 12a    Retired rozzer confiscates weapon, hawk having gone for US banker (7)
{POTOMAC} – reverse (retired) another slang word for a rozzer around (confiscates) a weapon used by Native Americans, after dropping the last part (hawk having gone), to get a river that forms part of the border of Washington DC – I visited George Washington’s house at Mount Vernon, on the banks of this river, many years ago

14a    All those gone to lethal end, ultimately slaughtered (5,4)
{DEATH TOLL} – the list of all those gone after an accident or a natural disaster is an anagram (slaughtered) of TO LETHAL and D (end ultimately)

19a    Passing sign, tram’s first caught by holy woman (9)
{MOMENTARY} – an adjective meaning passing or brief is created by putting a sign or portent and T (tram’s first) inside (caught by) a holy woman who was the mother of Jesus

21a    Tree with more rings to count? (5)
{ELDER} – a double definition – a type of tree and an adjective meaning having lived a longer time

23a    State capital, all there welcoming substantial backing (5,2)
{SANTA FE} – the state capital of New Mexico is created by putting a word meaning all there or rational around (welcoming) the reversal (backing) of substantial or plump

25a    Strip for a few dimes? (7)
{PEANUTS} – a double definition – the cartoon strip that features Charlie Brown, Snoopy & Co. and a few dimes or a small quantity of money

I feel a video opportunity coming on!

28a    Indian leader run ragged securing pardon? (5)
{NEHRU} – this former Indian leader is created by putting an anagram (ragged) of RUN around an interjection that means I beg your pardon

Could this be another video opportunity?

1d    Initially, shearer trimmed short tail (4)
{SCUT} – the initial letter of Shearer followed by a word meaning trimmed or clipped to give a short tail on, for example, a rabbit

2d    Old position in Java becoming vacant, in oil (6)
{JOJOBA} – put O(ld) and a position or occupation inside J(AV)A after dropping the inside letters (vacant) to get the waxy oil from a desert shrub of the box family – yes, I did have to look it up but the wordplay led directly to the answer

3d    No mates to bully, boy chipper? (10)
{STONEMASON} – an anagram (to bully) of NO MATES followed by a boy gives someone who chips away for a living

7d    School magazine’s first leak providing gossip (8)
{SCHMOOZE} – a charade of SCH(ool), the initial letter of Magazine and a verb meaning to leak gives this gossip or tittle-tattle

13d    Expert finds a trace of methylhexaneamine in sample after dope’s shown up (4,6)
{PAST MASTER} – this expert is created by putting the initial letter (trace) of Methylhexaneamine inside a sample or preview and preceding it with the reversal (up, in a down clue) a dope or idiot

18d    Probably always, rock raised above it (1,4,3)
{I DARE SAY} – to get a phrase meaning probably or doubtless put a two-letter word for always after an anagram (rock) of RAISED

20d    Salesman has to settle up for dog (6)
{YAPPER} – take salesman and a verb meaning to settle up, reverse them both and the result is a slang word for a dog

22d    Posh, after party, takes red jet (6)
{DOUCHE} – put the single-letter word for posh after a two-letter party and add a red or revolutionary to get a jet or shower

26d    Market in Marrakesh, consequently Britain (4)
{SOUK} – an Arab market or bazaar is a charade of a two-letter word meaning consequently followed by the country of which Britain is the main part – setters take note: Northern Ireland is not part of Britain, so the two names are not synonymous!

Both of the newer Toughie setters, Dada and Elkamere, have breathed fresh life into the Toughie Genre.  How about adding the Spider Woman (Arachne) to the panel as well?