I thought this was one of Ray T’s easier puzzles – but I’m sure you will let me know if your opinion is different!

7a    Singer’s cadenza ends in very old record (8)
{VOCALIST} – this singer is created by putting the end letters of CadenzA inside V(ery), O(ld) and a record or file

9a    Criminal after fine, one almost in jug (6)
{FLAGON} – put a slang word for a criminal (three letters, but not con this time) after F(ine) and before almost all of ON(E) to get a jug

10a    Hamlet perhaps, desperate character chasing Ophelia’s heart (4)
{DANE} – Hamlet’s nationality is a charade of a desperate cartoon character and the middle letter (heart) of OphElia 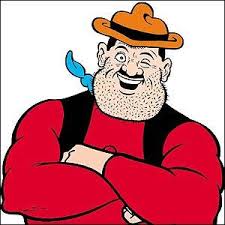 12a    Arrowroot, it isn’t containing inflammation (6)
{OTITIS} – hidden inside (containing) the first three words of the clue is an inflammation of the ear

15a    It’s hard when one’s out of luck! (6)
{CHEESE} – cryptic definition of the word that follows hard in an expression meaning out of luck

23a    Control limits a free market economy (10)
{CAPITALISM} – a word meaning to control or limit, often applied to local authority expenditure, is followed by an anagram (free) of LIMITS A to get a market-based economy

24a    Criminal proclivity? (4)
{BENT} – a double definition – an adjective meaning criminal and a proclivity or leaning

26a    Turn up record, ‘Endless Love’ by Queen (8)
{DISCOVER} – a word meaning to turn up or find is a charade of a gramophone record, (L)OVE without its initial letter (endless) and the single-letter abbreviation for queen – a better parsing is (L)OV(E) (endless love) with ER (queen) – thanks alison and others

1d        Amorous and sensual, topless, embracing chap (8)
{ROMANTIC} – a word meaning amorous is derived by taking a word meaning sensual, dropping the initial E and then inserting a chap (3) 19d      Challenged, providing over in action (6)
{DEFIED} – a word meaning challenged or confronted is created by putting a word meaning provided or on condition inside an action

22d      Nearly American on ‘Fifty-Second Street’ (6)
{ALMOST} – this word meaning nearly is a charade of A(merican), the Roman numeral for fifty, a second or instant and ST(reet)