Hello from the Vega Baja. Once more we have a Wednesday puzzle that’s not too difficult but with 2 or 3 clues to keep you on your toes! Possibly a bit heavy on clues involving anagrams (not my favourites as you probably know by now).  Somehow I thought this was a bit ‘flat’ for a Jay puzzle but maybe that’s just me!  As for star ratings – I’ve given 2* based on my personal solving time. If you post a comment please leave your own star rating and at about 1700BST I’ll average the lot and see what you guys think of it compared to me.

1a.    Fix the car before start of arrangements for air passage (7)
{TRACHEA} – This air passage is nothing to do with Ryanair (the last resort of the desperate traveller) but the air passage in the top of your lungs. It’s an anagram (fix) of THE CAR followed by A (start of Arrangements).

5a.     Cats, say, showing noted talent (7)
{MUSICAL} – Double definition. Cats is an example of one of these stage shows and if you were talented on an instrument you may be described thus.

9a.     A fruit not cored provides nutritious substance (7)
{ALIMENT} – Definition is nutritious substance. It’s a charade of A (from the clue), a fruit often associated with lemon, and NT (N(o)T cored).   I quite like this one as it seems to ring a bell with pommette’s dieting!

11a.     Panicky sort of cow in eye line (5,4)
{CROWSFOOT} –This is something you get in your eye when you get as old as me! It’s an anagram (panicky) of SORT OF COW. Don’t think I’ve ever heard this term in the singular before!

12a.     Charge after one, spitting feathers (5)
{IRATE} –A word meaning spitting feathers, or very angry, is made up from I (one) followed by the hourly charge the craftsman in 10a might make.

13a.     Angry men expect to hold back opposition (5)
{ENEMY} – the opposition is hidden in ANGRY MEN EXPECT but reversed (to hold back).

15a.     Naive, but clever replacing one eye for you, say (9)
{INGENUOUS} –To get a word meaning Naïve you need to first think of a word for clever. Then replace one of the I’s with a U. It’s a ‘sounds like’ clue (say), eye = I and you = U, and it needs to say ‘one eye’ because there are 2 in the word and only one needs replacing. This clue is not easy to explain!

19a.     Party animal beginning to riot, say (5)
{RAVER} –This habitual party goer is R (beginning to Riot) followed by the dreaded Latin word for say or state.

22a.     French city welcomes hotel for specialist market (5)
{NICHE} – Take a French city on the Cote D’Azur and insert (welcomes) H(otel) to get a word describing a small but specialised market.

23a.     Surprisingly help a mere transient (9)
{EPHEMERAL} –An anagram (surprisingly) of HELP A MERE gives a word meaning transient or lasting only one day.

26a.     Increases price of bitter for one who’s pretentious (7)
{UPSTART} –A word for increases (3) followed by a word meaning bitter, like a lemon perhaps (4) gives a pretentious person.

27a.     Half of Monaco looked loaded (7)
{MONEYED} – Take the first half of MONaco and follow with a common crosswordland word for looked and you’ll get a word meaning loaded, as in lots of cash!

1d.    Part of farm captured by those on the outside (7)
{TRANCHE} – Definition is ‘part of’. Take a word for a farm, a large cattle farm in America perhaps, and surround it (captured by) T and E (ThosE on the outside). Tricky rascal IMO and my last in!

2d.     Fat individual taken in by modern-day attitude (7)
{ADIPOSE} –This is a sort of fat found in all our bodies. Take I (individual) and surround it with the abbreviation for Anno Domini (modern day) and a word meaning attitude or stance. Apparantly a brown sort of this between the shoulder blades burns up calories and gives out heat. I seem to have a lot of it so don’t feel the cold and can eat lots without getting fat – much to pommette’s disgust!

5d.     Force jet fighter over height (5)
{MIGHT} –The usual Russian jet fighter followed by an abbreviation for height gives a word for force or power.

6d.     Merchant in store at works (9)
{STATIONER} – This merchant, who sells writing paper and envelopes is an anagram (works) of IN STORE AT.

7d.     Marx comes across silver in city (7)
{CHICAGO} – One of the Marx brothers (not Groucho) placed around (across) the chemical symbol for silver gives a large city in Illinois, USA.  One of my favourite cities, in fact, it’s my kind of town (sorry!)! 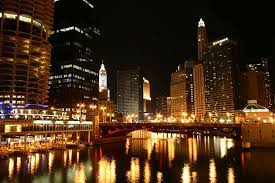 8d.     Stores fat with shows of hesitation (7)
{LARDERS} –These stores (for food) are some pig fat followed by the usual hesitation. Remember the clue is plural!

14d.     Song causing dry eyes at being played? (9)
{YESTERDAY} –A famous Paul McCartney song is an anagram (being played) of DRY EYES AT.

16d.     He got a different purpose for lodge (9)
{GATEHOUSE} – This lodge, at the entrance to a country estate perhaps, is an anagram (different) of HE GOT A followed by a purpose.

17d.     Follow offender’s record (7)
{CONFORM} –A word meaning to follow, or fit in with, is a charade of a criminal or prison inmate and a slang term for his police record.  I quite like the surface of this one.

18d.     Stand made by Hannibal, west of Turin (7)
{LECTERN} – Take Hannibal, not the guy with the elephants but him in Silence of the Lambs, and follow with N (west of TuriN?) to get a type of stand a lecturer may use for his notes. I think there’s a mistake here! Surely it should be EAST of Turin to get the N! 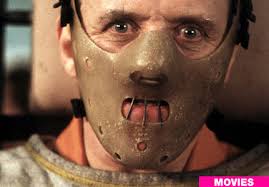 20d.     A train breaks down after five — that’s different! (7)
{VARIANT} – Something that’s different is an anagram (breaks down) of A TRAIN after the Roman numeral for 5. Is this a slight dig at Virgin Trains I wonder?

21d.     Told of consanguinity! (7)
{RELATED} –Double definition. A word meaning told also means to have something in common.

23d.     Better people in education (5)
{EMEND} –A word meaning to improve something is a word for people (male) inside the usual abbreviation for education.

24d.     Language used when in post, mainly (5)
{MASAI} –Take a word for post, as in the stuff delivered by the postman, without its last letter (mainly) and insert (in) a synonym for when to get the language of an East African people. 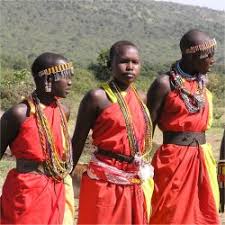 Favourites in blue but not so many as usual. Liked 27a the best.