Hello from the Vega Baja on another beautiful morning!

Crosswords are always easier when solved in the morning over a cup of tea and piece of toast but this one must be a strong candidate for being the gentlest Wednesday puzzle since I started blogging, solved in less than half the time of last week’s! As is usual with a Jay puzzle there are 2 or 3 tricky clues to keep us on our toes and it’s not overloaded with anagrams, although there are enough to keep the anagram fans happy I think.

1a.    Like a loud blonde’s relationship? (4,6)
{LOVE AFFAIR} – This relationship, which a gentleman might wish to have with a blonde, is a charade of a word meaning like (4), A (from the clue), the letter meaning loud in music and a word meaning blonde (4). String that lot together and split it (4,6).

10a.    Discard shot game (5)
{BINGO} – A charade of a word meaning to throw in the trashcan (3) and a word meaning shot, as in try, gives a popular numbers game.  This is a bit sloppy IMO as the word for try is the same one as that used in the previous clue! 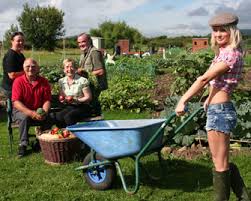 12a.   Clear up and give correct points to club, finally (8)
{BRIGHTEN} – Clear up, in the sense of weather, is made from B (cluB finally), a word meaning correct and 2 points of the compass.

13a.    Keen on crossing river — it’s a short passage (5)
{INTRO} – A short passage, at the beginning of a piece of music perhaps, is a colloquial term for keen or enthusiastic with R inserted (crossing River).

15a.    Hastily repaired street might be so (7)
{COBBLED} – A street in the old part of town might have a surface like this. It’s also a word meaning hastily repaired or hastily put together. Most of the repairs on my house could be said to be like this! Apparantly these are ‘sets’ rather than the answer – thanks to WBGeddes for pointing this out. 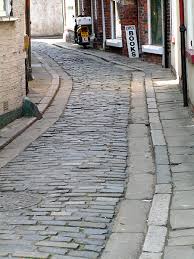 17a.    Cry, getting credit for quiet during delivery (7)
{SCREECH} – A substitution clue. Take a word meaning delivery or oration and change the P to a CR (CRedit  for quiet) to get a word for a cry or scream. Nearly always one of these in a Jay puzzle and I’m getting much better at spotting them!

19a.    Ham is finished and cat worried (7)
{OVERACT} – Ham here is the definition and it’s nothing to do with cured pork! A verb meaning ‘to ham’ is made from a word meaning finished or ended followed by an anagram (worried) of CAT.  I liked this one because it conjured up a rather bizarre image! Perhaps my sense of humour is a bit too visual! 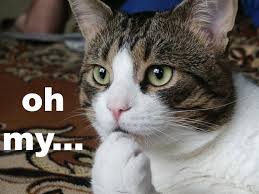 21a.    Eccentric degree students are after rum (7)
{ODDBALL} – This eccentric is a word for rum or strange followed by an arts degree and two students.

22a.    Material change only coming after revolution, ultimately (5)
{NYLON} – This synthetic material is an anagram (change) of ONLY placed after N (revolutioN finally). 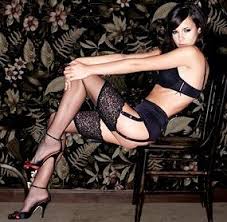 24a.    Record volume for a computer (8)
{NOTEBOOK} – The sort of small computer which I use is a word for record or write down followed by a volume you might find in the library.  This sort of computer is a bit of a pain for solving crosswords because the whole grid won’t fit on the screen!

27a.    Sort of apprenticeship plate on walls of inn (9)
{INDENTURE} – Another word for apprenticeship is the sort of plate you may wear in your mouth placed on IN (walls of InN).

28a.    Quartz is corroded by silver (5)
{AGATE} – A type of quartz is the chemical symbol for silver followed (by) a word which can mean corroded, or even eroded!

2d.     August never varies on revolutionary island in the Med (9)
{VENERABLE} – A word meaning august or praiseworthy is an anagram (varies) of NEVER followed by a Mediterranean island reversed (revolutionary).  Placing august as the first word cleverly disguises the unnecessary capitalisation, how many of you first thought of the month?

4d.     Ate loads, but ate nothing loaded with energy (7)
{FEASTED} – Ate loads is the definition and the answer is a word for ate nothing with E inserted (loaded with Energy).

5d.     For example, Channel traffic might precede them (7)
{ISLANDS} – This is a sort of all-in-one clue (I think). You need a word that could be preceded by either of the words ‘channel’ or ‘traffic’ to give a meaningful phrase in each case. Tricky little rascal and my last in! 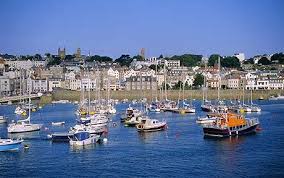 7d.     Deal with engineers trapped in rubbish (5)
{TREAT} – Take the usual engineers and surround them (trapped in) with a word meaning rubbish or ‘cheap and cheerful’

8d.     Corner with talk of flowers? (10)
{BUTTONHOLE} – This word meaning to corner for a chat, in a bar maybe, is also the sort of flower gents wear on their suits at a wedding.

9d.     In-flight security? (5,3)
{STAIR ROD} – Not an Air Marshall! This security device is used to keep the carpet in place on a flight of stairs.

18d.     Explain to a rebel worried about answer (9)
{ELABORATE} – A word meaning explain or add more detail is made from an anagram (worried) of TO A REBEL placed around (about) A(nswer).

21d.     Unfashionable clothes have a longer life (7)
{OUTWEAR} – A word meaning to last longer is a charade of a word for unfashionable and a general word for clothing.

25d.     Thinker, born to rule, reportedly (5)
{BRAIN} – This part of your body which does the thinking is B(orn) and word that sounds like (reportedly) to rule.

26d.     Raise game, though exhausted (4)
{BEAT} – To raise game, at a shoot perhaps, is also a word meaning exhausted or very tired.  I got the answer straight away as I had both checkers but it took a minute or so for the penny to drop on the wordplay! I was thinking ‘raise game’ as in play better in order to do this, D’oh!

Although there are only 2 straight anagrams here there do seem to be more partial ones than I first thought. I like all the ones in blue but favourite has to be 19a for the image of pommette’s cats in a panic because the ham had run out!