Toughie No 582 by Notabilis

Hints and tips by Tilsit and Big Dave

Greetings from the Calder Valley and from Big Dave Towers! We are doing a double hander today with BD doing the Downs and me the Acrosses. I’m not feeling 100% and will retire to my bed after doing my bit. A lovely puzzle from Notabilis today with plenty to make you smile and nice way to end what I feel has been a mixed Toughie week. It’s one of those puzzles that took a bit of working out, but once you see the answer and match it to the clue, you can see and appreciate the way it works (and the mind of the evil genius behind it!). As usual with Notabilis, some of the clues are innovative ways of working clues, 8 across being a great example. How many setters would have clued it in that way?

I’m not sure whether we have a NINA in today’s puzzle, although the answers to 9 across and 12 across when linked can produce a sort of reference to the clue at 12!

A couple of grumbles, not directly connected with the puzzle. The website today has been a real mess. I was trying to solve the puzzle on line while resting in bed and had problems trying to save it, the page crashing and when I used two “one-letter” hints, it took the five off me. I noticed a new link on the page to “the Puzzles helpline”, so whether that has anything to do with it, I’m not sure. Not that I personally am fussed, but my stats for solving the puzzle were completely wonky by the time I completed the puzzle.

I was also disappointed that a puzzle of this quality was badly rated by the solvers, although as of now, it has increased somewhat. At 09:30 this morning, it had a score of two smiles and one star, a complete travesty [only three had solved it at that time, the Telegraph’s tester, serial cheat Robr and one other.  BD]. I sometimes think that wording of the rating on the Telegraph site is very misleading. If you mark the puzzle “completely satisfying”, I can’t work out what rating it awards the puzzle, likewise with “downright infuriating”. I personally would say the former is a 5, but the latter to me could also merit a high mark, a puzzle can be infuriating and still really enjoyable.

Favourite clues are highlighted in blue, and you can leave your own assessment by selecting from one to five stars at the bottom of the post. Please leave a comment telling us what you thought as well, they are very helpful for the setters that visit the site.

On with the motley, and let’s away…..

8a    Ignoring repeats, Barney Rubble changed in suave manner (8)
{URBANELY} If you take the letters of BARNEY RUBBLE and remove the repeated ones, and then anagram the remainder, you will get a description of how the subject of the next clue was perceived……

9a    Steed added to Emma’s ultimate value (6)
{AMOUNT} My favourite ever TV series! I grew up with The Avengers and loved every episode. Indeed the show celebrates its 50th anniversary this year and has just brought out a special DVD boxed set to commemorate the event (If anyone reading this feels the urge to get me a birthday present, hint, hint!) [Keep hinting! – BD]. The last letter of EMMA has a word meaning Steed or Horse added to it to give a word meaning value.

One of my favourite clips. Note Peter Wyngarde as the baddie:-


10a    Pharaoh partly got over stroke (3)
{OAR} Hidden and backwards (indicated by “partly” and “got over”) in the word “PHARAOH” is a word meaning stroke in rowing.

11a    Writing a condition, I limit turning to non-violence (8)
{PACIFISM} A reverse word sum. A word that means a type of writing (the abbreviation for manuscript) + one used to indicate a condition + a phrase meaning “I restrict or limit”. When this is all reversed you get the word for non-violence, as in the caused espoused by Gandhi.

12a    Reinforce part of name Philip shares with his mother (6)
{BATTEN} This could have been used last Friday, when a certain famous Philip celebrated his 90th birthday. Take his full name and remove just over half (the latter half) of one of the parts of his surname to get a word meaning reinforce.

13a    Pariah soon interrupts ditty beset by piano mistakes (7,3,5)
{PERSONA NON GRATA} The poetic way of saying “soon” goes inside a word for a ditty, and this all goes inside the abbreviation for piano in music notation, and the publishers word for printing mistakes. This altogether gives you a phrase for an unwelcome visitor.

15a    Composer of some art? (7)
{MAESTRO} An anagram of “some art”, with the anagram indicated by “composer”. This is what is called an “& lit” or “all-in-one” clue, where the whole clue provides the definition.

18a    Report of collision energy in parched ground? (7)
{POWDERY} A word meaning “ground” as in pepper can be found by taking a word heard after an impact or collision (Think Batman and Robin!) and the abbreviation for energy placed inside a word meaning parched.

21a    Money-holder, keeping rest, wasted rand among money for financial disaster (4,6,5)
{WALL STREET CRASH} A famous fiscal event from the late 1920’s is found by taking where you put your folding paper-money and inserting an anagram (“wasted”) of REST. Add to this another word for money with R (for rand) inside.

24a    Sharp movement relating to billion in capital (6)
{ZAGREB} A Balkan capital is revealed by taking a word for a sharp movement (usually in the phrase ZIG ____) and adding the abbreviation found in letters for “relating to or about” and B (for Billion).

26a    In recession, any other business targets are constricted by me (3)
{BOA} The abbreviation for what happens at the end of a meeting is reversed to give a species of snake famous for delivering crushing disappointments.

28a    What may litter church steps etc if not tidied up (8)
{CONFETTI} An anagram (indicated by “tidied up”) of ETC IF NOT reveals a word for stuff found in the doorways of churches on most Saturday afternoons.

I shall now hand you over to the Boss!

3d    Edge unbristles tip of beard imperfectly, leaving this? (8,7)
{DESIGNER STUBBLE} – an anagram (imperfectly) of EDGE UNBRISTLES and B (tip of Beard) gives what could be left behind after the “unbristling” 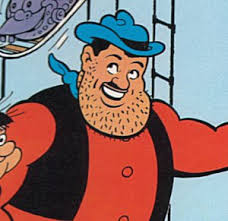 4d    Good person representing Spock and women’s rearing state (7)
{WYOMING} – take a charade of G(ood), the actor who played Spock in Star Trek and W(omen) and reverse the lot (rearing) to get a US state

5d    Walking into motor oil company, runs into reduced cost of fossil fuel (6,9)
{CARBON FOOTPRINT} – put a two-word phrase meaning walking inside a motor and an oil company that has been in the news recently, add R(uns) and INT (into reduced) to get the cost to the environment of using fossil fuel

6d    Ace regiment’s up in school, working to a higher degree (8)
{POSTGRAD} – reverse (up) A(ce) and the abbreviation for regiment, not forgetting the ‘S, inside a school of fish to get a student who is working to obtain a higher degree

14d    Whisky and bitter by mouth (3)
{RYE} – this type of inferior whisky, or should that be whiskey, drunk by Americans sounds like (by mouth) bitter or twisted

16d         Maybe porter holds a barrow, allowing freedom of choice (1,2,5)
{À LA CARTE} – porter is a type of beer, so put another word for beer around A and a barrow to get a French phrase meaning with the freedom to pick and choose, particularly from a menu

17d         Very well-upholstered article goes in time of revolution (5,3)
{SOLAR DAY} – a word meaning very (2) is followed by one meaning well-upholstered or overweight and then A (indefinite article) is inserted to get the time it takes the earth to revolve on its axis

22d         Man races to stop rare, exotic hunting dog (6)
{RATTER} – put the motorcycle races for which the Isle of Man is renowned inside (to stop) an anagram (exotic) of rare to get a hunting dog

23d         Bloodhound picked up end of trail in hot third day (6)
{SLEUTH} – this bloodhound or private detective is a reversal (picked up) of L (end of traiL) inside H(ot) and a four-letter abbreviation of the third day of the week (the one that starts on Sunday!)

What a difference a day makes in Toughieland!  My blue highlighter is worn out.