Toughie No 572 by Osmosis

This is a superb midweek Toughie from Osmosis, jam-packed with “penny-drop” moments. It’s not terribly difficult (nothing obscure) but it is tremendously entertaining. Let us know what you thought of it in a comment.
Please take the time to record your assessment of the puzzle by clicking on one of the stars below.

1a  Old court to stiffen caution for motorists (4,7)
{STAR CHAMBER} – this is the name of a secretive court which tried important and political figures and which reached the height of its power (and the abuse thereof) under the Stuarts before being abolished in 1641. It’s a charade of a verb to stiffen (shirt collars, for example) and the light signifying caution for motorists.

7a  Apply to doctor/nurse for protection restricting babies? (7)
{PLAYPEN} – It’s a bit odd that one of the words in this clue is the answer to a clue which intersects it. Start with an anagram (to doctor) of APPLY and add the abbreviation for an enrolled nurse. The result is something that confines babies in safety.

8a  Praise hospital staff working around clock, essentially (4,3)
{HATS OFF} – this is a phrase used to express admiration and praise for someone. H(ospital) is followed by an anagram (working) of STAFF around the middle letter (essentially) of clOck.

10a  Private play entertains males (5)
{TOMMY} – put a verb meaning to play around two M(ales) to get the traditional name for a private in the British army.

11a  Frenchman’s agreed to stuff a snail, cooking for Gallic-style place (9)
{LOUISIANA} – this place is a US state which was originally a French colony and it’s Gallic-style because it was named after le roi soleil. Put the French for yes (agreed) inside (to stuff) an anagram (cooking) of A SNAIL.

12a  Members of flock host upmarket service, a section in tweeds? (4-3)
{TURN-UPS} – put another word for rams (members of flock) around (host) the letter used for posh or upmarket and the abbreviation for one of our armed services. The result is a trouser style that goes in and out of fashion on a regular basis, in tweeds and other materials.

14a  Addressed the limits of those living in sin (7)
{GREETED} – the outer letters (limits) of T(hos)E go inside (living in) one of the seven deadly sins.

15a  Laurel awarded finally excited comedian (5-2)
{STAND-UP} – this is a type of comedian. It’s a charade of Ollie’s partner (Laurel), the final letter of (awarde)D and a synonym for excited. 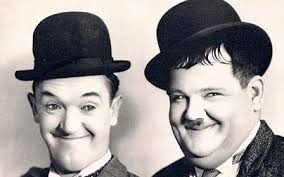 18a  Prosecutor enters noisy quarrel that’s boring (7)
{BRADAWL} – to get this boring tool put the abbreviation for a US state prosecutor inside (enters) a noisy quarrel.

20a  City ring road originally wrong, in hindsight (9)
{LIVERPOOL} – string together an oval or circular-shaped coil (ring), the first letter (originally) of R(oad) and something wrong or sinister. Then reverse the lot (in hindsight) to make an English city.

21a  Belgian town in European country (not Belgium) (5)
{SPAIN} – start with a Belgian town (which will be known to most for its track where overpaid divas drive round in procession until someone waves a black and white flag to bring the whole dreary proceeding to a merciful conclusion. Its second claim to fame is as the birthplace of the fictional Hercule Poirot). Now add IN to make a different European country.

22a  Student accommodation rocks for nocturnal types (7)
{DORMICE} – these nocturnal creatures are a charade of abbreviated sleeping quarters for students and a slang term for diamonds (rocks).

24a  Toss-up affected, with tide Eastern — a challenge for one rowing? (4,7)
{STEP OUTSIDE} – this is a challenge, normally issued after the intake of strong liquor, made by one protagonist in a dispute (row) to another. It’s an anagram (affected) of TOSS-UP, TIDE and E(astern).

2d  What Newton used to do with his theories — like the one discovered under a tree? (5)
{APPLY} – double definition, the second a very cryptic (hence the question mark) made-up adjective which might describe what is supposed to have triggered Newton’s thoughts on the nature of gravity.

3d  They illuminate the prop of a ‘Two Ronnies’ sketch x 4 (7)
{CANDLES} – these illuminate and there were four of them in the famous sketch. We’ve had this several times but it’s a classic and worth seeing again.


4d  Caught frolicking around rear of hidden cave (7)
{ACHTUNG} – there’s a real penny-drop moment here. Cave is not an underground cavern but the latin imperative meaning “look out!” which was once used by schoolboys (in the good old days when latin was a standard subject) to warn of the imminent arrival of a teacher. We want the equivalent German word which is an anagram (frolicking) of CAUGHT around the last letter (rear) of (hidde)N. Superb!

5d  Man, during Sabbath, fancied a scriptural woman (9)
{BATHSHEBA} – put a masculine pronoun (male) inside (during) an anagram (fancied) of SABBATH to make the name of the woman whom King David fancied and seduced and who became the mother of Solomon.

6d  England footballer, with diplomacy, given official warning (4,3)
{RIOT ACT} – a charade of the forename of a current England footballer and a synonym for diplomacy produces a form of words read out to warn those causing an affray to disperse.

7d  Murphy unfortunately returned starter in diner, a side dish (6,5)
{POTATO SALAD} – put what Murphy is an informal name for in front of a word meaning unfortunately which has to be reversed (returned). Then finish with the first letter of D(iner) to make a side dish.

13d  Stress where linen can be found in Chambers? (9)
{UNDERLINE} – it’s a pity that Osmosis couldn’t have found some way of making Chambers the first word to disguise the fact that it has to be capitalised. It is of course our favourite big red book (other dictionaries are available) and what we want is where you’d find linen in it (5,4).

16d  Bachelor forced into unfavourable shaving — so comically here? (7)
{ADVERBS} – put the abbreviation for B(achelor) inside a synonym for unfavourable after trimming (shaving) its final E. What you end up with are parts of speech of which “so” and “comically” are examples.

17d  Having a tendency to fast around second quarter of Lent (5,2)
{PRONE TO} – the definition is having a tendency to. Put an informal 16d meaning fast or at high speed around the second letter (quarter) of lent. We had a very similar clue from Virgilius recently: Liable to be affected by onset of emotion, quickly going outside (5,2).

18d  Sporting legend admitted learning football artistry originally here (7)
{BELFAST} – This is a lovely semi-all-in-one clue. The surname of a footballing legend goes round the initial letters (originally) of L(earning) F(ootball) A(rtistry) to make the city where he grew up (and where the city airport now bears his name). He famously said “I spent 90% of my money on women and drink. The rest I wasted.”

19d  Express pilot consumes snack abroad (2,1,4)
{AT A PACE} – put a word used to describe an expert airman (pilot) around (consumes) a Spanish snack. The result is an adverbial phrase meaning with haste or express.

21d  Brightness shifting North North-East gives cheer in Orient (5)
{SUSHI} – start with the brightness that we sometimes enjoy in summer and remove (shifting) the abbreviations for a) North, and b) North-East to leave an oriental dish (cheer).

There are too many favourite clues to list them all, but I especially liked 11a, 20a, 24a and 18d. Best of all, however, is 4d. Let us know which ones stood out for you.