Toughie No 548 by Shamus

What a Difference a Day Makes

By common consent the back-page crossword by Shamus yesterday was a gentle but entertaining puzzle, ideal for newcomers. Today he’s shown his range and given us a proper Toughie which I enjoyed (and it’s a pangram). Let us know what you thought of it in a comment.
After yesterday’s Toughie, when there was obviously some “block voting” going on which made the whole exercise farcical, I’ll understand if you feel it’s a waste of time casting an individual vote to indicate how much you enjoyed the puzzle. However, if you’d like to, please click on one of the stars below.

1a  Follow fellow getting drunk, losing head in melee (8)
{DOGFIGHT} – this is a melee or untidy brawl. Start with a verb to follow, then add F(ellow) and a synonym for drunk without its initial T (losing head).

5a  Justice with stable employee almost getting push? (6)
{JOSTLE} – J(ustice) is followed by someone who used to be employed at an inn to look after travellers’ horses, without the final R (almost).

9a  Show incomplete set of proposals (8)
{MANIFEST} – for the third clue in a row we have to drop the final letter of a word. This time we lose the final O (incomplete) from a set of proposals (for example what a political party promises to do before an election, which is normally quietly shelved should they win).

10a  Duck to avoid college friend (6)
{QUAKER} – for a change we have to remove (avoid) the C(ollege) from the middle rather than the end of a word. The pre-deletion word is a duck (based on the sound it makes); after the deletion we have a member of a religious sect whose proper name is the Religious Society of Friends.

12a  Turn favoured by thriller? I go to hide! (6)
{INVERT} – this is a verb which can mean to turn upside down or reverse. Start with an adjective meaning fashionable or favoured and add the name of a Hitchcock thriller without (to hide) I GO.

13a  Low light around river, a feature of Yorkshire? (8)
{MOORLAND} – the question mark indicates that Yorkshire is just an example of somewhere which has a lot of this (including two national parks in Yorkshire’s case). Start with a verb meaning to low and add another verb to come down, then insert R(iver). 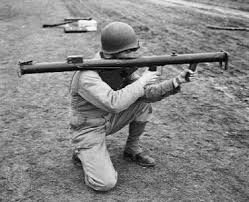 16a  Powdery stuff, stash of fatal cocaine (4)
{TALC} – this powdery stuff is stashed in the clue.

20a  Horrific party putting government in tangle (4)
{OGRE} – party here is being used in the legal sense to mean an individual. Put G(overnment) inside a word (new to me) meaning a tangle (which is a coarse seaweed).

21a  An activity supplying pots? (7)
{SNOOKER} – this was the last clue I got (doh!). It’s a cryptic definition of a sport for which I believe the world championship is currently taking place.

25a  Old cricketer to roll up right away having attractive quality (8)
{GRACEFUL} – the surname of perhaps the most famous cricketer of them all is followed by a verb meaning to roll something up without its R (right away).

26a  Put forward a function for audience (6)
{ASSIGN} – a verb meaning to put forward or designate is A and what sounds like (for audience) a mathematical function.

29a  Finesse shown by dog perhaps rounding sheep (8)
{STRATEGY} – an artifice or finesse is formed by putting what a dog may be (perhaps) if it has no owner around (rounding) a sheep in its second year.

30a  Pass first of exams associated with liberal part of church (6)
{ELAPSE} – the first letter of E(xams) is followed by L(iberal) and part of the structure of a church to make a verb meaning to pass (of time).

31a  Such might be morgues at work with the ultimate in gore? (8)
{GRUESOME} – this is a semi-all-in-one. An anagram (at work) of MORGUES is followed by the last letter (ultimate) of (gor)E.

1d  Turkey I had raised with German around start of week (6)
{DIMWIT} – I was aware that turkey could refer to a complete flop, for example a film doing badly at the box office, but I didn’t know that it was also a North American slang term for a fool. Reverse (raised, in a down clue) the contracted form of I had and follow this with the German word for “with” containing (around) the first letter of W(eek).

2d  Spirit displayed by girl following dope (6)
{GENEVA} – this is a type of Dutch gin (spirit). Put a girl’s name (think of Hitler’s mistress) after a slang term for dope or information.

4d  Entertainer sought-after around society (4)
{HOST} – a description of something sought-after or “all the rage” goes round S(ociety) to make someone who entertains.

11d  Cultivate concession in Midlands town (7)
{WORKSOP} – a charade of a verb to cultivate and a concession makes a town in Nottinghamshire.

14d  Give rough figure for drinks being promoted (5,2)
{ROUND UP} – a phrasal verb meaning to give an approximation using fewer decimal places is a charade of drinks for all and a synonym for promoted (like a football team at the end of the season).

17d  Two Cabinet ministers defending line? It might be part of plot (8)
{FOXGLOVE} – if this crossword appears again in a few years time these two characters will almost certainly have been forgotten. The surnames of the Secretary of State for Defence (Dr Liam …) and the gaffe-prone Secretary of State for Education (who gained a cabinet seat in spite of furnishing one home at our expense then “flipping” to another house and claiming £13,000 in moving expenses) go round (defending) L(ine). A clever clue because friends of the good doctor have already accused the party leadership of plotting against him.

18d  Meat with care cooked — tourist fare? (5,3)
{CREAM TEA} – an anagram (cooked) of MEAT and CARE forms a Devonshire speciality which all visitors should try. Remember that the correct way to eat it is to put a liberal helping of the dairy product on first, then add the jam on top (not, as the misguided folk to the west of the Tamar would have you believe, the other way round!). 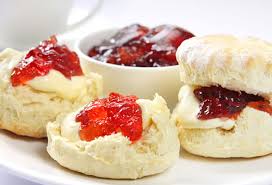 19d  Convince uppity businessman to take action about bill (8)
{PERSUADE} – reverse (uppity, in a down clue) a travelling businessman and add a verb meaning to instigate legal action around the abbreviation for a bill or poster.

22d  Conservative follows with no end of intrigue count (6)
{CENSUS} – the definition is a count. Start with C(onservative) and add a verb meaning follows after removing the last letter of (intrigue)E.

23d  Footballer in the same place in new role (6)
{LIBERO} – for some time I thought that this was going to be the name of a (Brazilian?) footballer. However the on-line site rejected my attempt at Ribelo and I had to investigate the only other realistic possibility, given the wordplay and checking letters. Apparently this is an alternative name for what is called a “sweeper” and it’s the Italian word for free. Put an anagram (new) of ROLE around the abbreviation of the latin word ibidem meaning in the same place (used in books to refer to something previously cited).

24d  Eastern couple of islands still largely restricting mass set of proteins (6)
{ENZYME} – start with E(astern) and add the IVR code for the country for which “couple of islands” is a rather humorous description. Then finish with a synonym of still without its final T (largely) around (restricting) M(ass).

27d  Excite bird (4)
{STIR} – double definition, one another informal term for what bird is slang for.

The clues which I liked included 5a, 31a and 8d but my favourite was 17d. Let us know what you liked in a comment.