Toughie No 524 by Giovanni

Giovanni has given us a Toughie which covers a broad spectrum of knowledge from Greek mythology to jazz musician via a meteor shower. As always his definitions are very precise and his wordplay is exceedingly fair. I struggled with it a bit (especially 4d) but enjoyed it a lot.
Let us know how you got on in a comment and please don’t forget to signal how much you enjoyed it by clicking on one of the stars below.

1a  Musician, learner with hesitation, was flat unfortunately to begin with (4,6)
{FATS WALLER} – this is a Jazz Pianist, composer and singer who died in 1943. We want the abbreviation for learner and an interjection expressing hesitation, but before all that there’s an anagram (unfortunately) of WAS FLAT.


9a  One to rescue limited number, going to a height (4)
{NOAH} – this is a semi-all-in-one. The abbreviation (limited) for number is followed by A and H(eight).

10a  Beginners’ alphabet in wording under diagram could be taxing (10)
{CAPITATION} – put the abbreviation for the Initial Teaching Alphabet inside the text that appears under a diagram to make a poll-tax.

11a  Government agent against despot, not half (6)
{CONSUL} – the sort of government agent that you may come across if you get into trouble abroad is made from a prefix meaning against and the first half of the title of a ruler in Muslim countries.

12a  Space traveller by himself with a bit of personality (7)
{PERSEID} – this space traveller is a meteor shower associated with the Swift-Tuttle comet. Start with a term (3,2) meaning by himself or by itself and add one of the three parts of the personality in psychoanalytic theory according to Freud (the other two being the ego and superego).

15a  Author’s car (7)
{PULLMAN} – double definition. The surname of the children’s author (who wrote the magnificent “His Dark Materials” trilogy) is also a luxurious railway car. 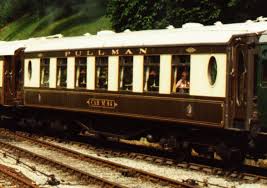 16a  Fish caught — endless hassle (5)
{CHARR} – this is a fish of the salmon family, found in mountain lakes and rivers. It starts with C (caught, as in cricket) and this is followed by a verb meaning to hassle without its final Y (endless).

18a  Aspect of moon’s appearance said to unsettle (4)
{FAZE} – a verb meaning to unsettle sounds like (said) one of the aspects of the moon.

19a  Cold fish (5)
{BLEAK} – an adjective meaning cold (as it may be in midwinter) is also the name of a small silvery river fish.

21a  Before the start of event formidable person will be dressing (7)
{TARTARE} – this is a mayonnaise dressing. Put a formidable or ferocious person in front of E(vent).

22a  Shopping area? Then for demolition use hammer (7)
{MALLEUS} – a small bone in the middle ear (also known as a hammer because of its shape) is a shopping area followed by an anagram (for demolition) of USE.

24a  Former PM ignoring the Queen — hairy stuff? (6)
{THATCH} – a former Prime Minister (who had a frosty relationship with the Queen) loses (ignoring) the Queen’s initials to leave thick hair.

27a  Two wines, litres being drunk? I’m not happy (10)
{MALCONTENT} – someone who is the opposite of satisfied with the current situation is formed from a burgundy wine followed by a deep-red Spanish wine, with L(itres) inserted (drunk).

29a  Very many like identification using letters only? (10)
{NUMBERLESS} – double definition, the second semi-cryptic.

2d  Hero is a ‘card’ wanting a kiss (4)
{AJAX} – the name of this mythical Greek hero is constructed from A, the abbreviation for a court card in bridge, A again and the symbol for a kiss.

4d  Using some upsetting rhetoric, I am a ranter in mostly obsolete language (7)
{ARAMAIC} – hidden (some) and reversed (upsetting) in the clue is a Semitic language. Giovanni, as always, is very precise in his definition – although the language is pretty much obsolete a form of it is still in use in some Eastern Orthodox churches (so it’s mostly obsolete).

7d  Perfect short story enthralling tot with mum (10)
{CONSUMMATE} – a word, from French, for a short story contains (enthralling) a verb to tot up and an affectionate abbreviation of mother. The definition is perfect.

12d  Estate office has scheme to replace its head (10)
{PLANTATION} – this is an estate where things are grown (cotton, tea or sugar for example). Start with another word for a local office and replace its initial (head) S with a scheme.

13d  Noteworthy as script from borderline candidate might be? (10)
{REMARKABLE} – double definition, the second a cryptic definition of an examination script that may be in need of a second assessment.

14d  Dog beginning to dig place for the bone? (5)
{DHOLE} – this is an Indian wild dog. The first letter (beginning) of D(ig) is followed by a place where the dog may hide his bone.

19d  One of the top priests, a clever person protecting the Queen (7)
{BRAHMIN} – put a term meaning an intelligent person around the abbreviation of the Queen’s title to make someone from the highest or priestly caste in Hinduism.

20d  What you get in some bars — strong Asian drink served up, all right? (7)
{KARAOKE} – start with a strong colourless liquor made from raisins (the name of which is the Arabic word for sweat) which turns milky-white when water is added and reverse it (served up). Now add a way of saying the abbreviation meaning all right to make a form of entertainment (?) heard in some bars.

23d  Time for eating less? I left food (6)
{LENTIL} – it’s that time of year again when we have to be prepared to see this word for a period of self-denial in many puzzles. Add I and L(eft) to make some food.

26d  Workers in county briefly taking hour off (4)
{ANTS} – start with the abbreviated (briefly) name of a county on the south coast of England and remove the initial H (taking hour off).