11a    Yahoo available on line (4)
Yahoo is an old name for a rude, noisy, or violent person – put available, as in published, after L(ine)

14a    Two rings attached to European bird (6)
Start with a ring like one used for a game, add a circular letter of the alphabet and finish with E(uropean) to get a salmon-pink Eurasian bird 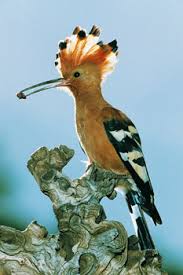 26a    Silly Harry reckoned without parking in West End location (4,4,6)
An anagram (silly) of HARRY RECKONED is placed around P(arking) to get a location in the West End of London 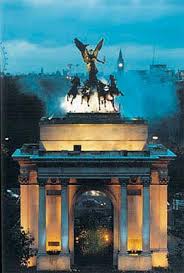 1d    Femme fatale lied disgracefully and upset prince (7)
This biblical femme fatale is an anagram (disgracefully) of LIED followed by Shakespeare’s name for Henry V before he became king reversed (upset)
I still remember the first few lines of Prince Henry’s speech in Act 1 Scene 2 of Henry IV Part 1, in which he is telling the audience that he will rise above his dalliances with Falstaff and friends when he becomes king:

I know you all, and will awhile uphold
The unyoked humour of your idleness:
Yet herein will I imitate the sun,
Who doth permit the base contagious clouds
To smother up his beauty from the world,
That, when he please again to be himself,
Being wanted, he may be more wonder’d at,
By breaking through the foul and ugly mists
Of vapours that did seem to strangle him.
If all the year were playing holidays,
To sport would be as tedious as to work;
But when they seldom come, they wish’d for come,
And nothing pleaseth but rare accidents.
So, when this loose behavior I throw off
And pay the debt I never promised,
By how much better than my word I am,
By so much shall I falsify men’s hopes;
And like bright metal on a sullen ground,
My reformation, glittering o’er my fault,
Shall show more goodly and attract more eyes
Than that which hath no foil to set it off.
I’ll so offend, to make offence a skill;
Redeeming time when men think least I will.

3d    A swan, deprived of space, sits on this river (4)
Remove the space between A and SWAN to get a city on this river, famous for the nearby dam 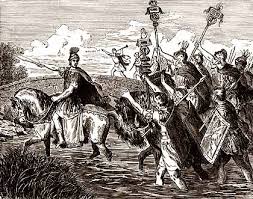