Toughie No 472 by Micawber

Magnificent stuff from Micawber today and nowhere near as difficult as he can be. I did think at one stage that it was going to be a pangram, but it’s not. For me this is an ideal Toughie – witty, clever clueing with lots of “aha” moments and not an obscure answer in sight. You may gather from this that I liked it a lot.
Please let us know in a comment what you thought of it and please remember to show how much you enjoyed it by clicking on one of the stars below.

5a  Go through list drawn from mates I met initially on rebound to matchmake? (7)
{ITEMISE} – a verb meaning to go through a list is hidden (drawn from) and reversed (on rebound) in the clue. . Thanks to Dynamic for pointing out that to matchmake is a second, cryptic, definition, i.e. to make into an “item”.

9a  Insubstantial stuff in publication — magazine centrefold? (7)
{ORGANZA} – a thin transparent dress fabric is made from a publication through which information and/or opinion is communicated followed by the middle letters of magAZine reversed. Centrefold fulfils the dual purpose of identifying the central letters and telling us to reverse (fold) them.

11a  Brief life story: ran into bar owner, lacking final letter with ID form needed for flight? (9)
{BIOMETRIC} – this is a fantastic clue, based on the plot of the classic film Casablanca. The definition is ID form needed for flight, i.e. the form of ID required in a passport. It’s a charade of an abbreviated (brief) life story, a verb meaning ran into and the name of the Humphrey Bogart character (bar owner) in the film without its final K (lacking final letter).


12a  Striking effect of oriental powder brought west (5)
{ECLAT} – the definition is striking effect. Start with an abbreviation for oriental and follow this with the abbreviated form of a cosmetic powder which has to be reversed (brought west, in an across clue).

13a  Searched e.g. Donald head to toe (5)
{RAKED} – a verb meaning searched is made from the correct name for the male cartoon character Donald with the first letter moved to the end (head to toe).

15a  Time, how it’s measured mostly, and what it’s made up of in great number (9)
{THOUSANDS} – the definition is great number. Start with T(ime) and add all but the final R (mostly) of a unit of time and a word meaning moments of time (from the use of grains of it in a timing device).

22a  Firework shows originating 50% of petty objections (5)
{SQUIB} – a small firework starts with the initial letter (originating) of Shows and this is followed by the first half (50%) of a word meaning petty objections.

23a  As Parliament, bail out grasping Prime Minister — that’s not on (9)
{BICAMERAL} – a word meaning having two chambers (like our Parliament) is an anagram (out) of BAIL around (grasping) the name of the current PM without ON.

25a  Disturb armed group breaking into a country house (7)
{AGITATE} – put the abbreviation for our volunteer army (armed group) inside (breaking into) a rural accommodation (often a furnished holiday house) in France.

26a  Topless punk dancing round pole non-stop (2-5)
{ON-GOING} – a present participle meaning jumping up and down on the spot to music (punk dancing) has its initial P removed (topless). What remains then goes round a pole to make an adjective meaning non-stop.

28a  Offended after rejection of non-Jewish culture (7)
{YOGHURT} – the definition is culture. Put an adjective meaning offended or aggrieved after an informal, derogatory Jewish word for a non-Jew which is reversed (rejection).

1d  Menu — might one in such an establishment feature a screwdriver? (7)
{TOOLBAR} – this is a pictorial menu which you can often see in an application window on your screen. A screwdriver might appear in one of these in a hardware shop; alternatively, as a drink, it might feature on the menu in a drinking establishment.

2d  Set up pan with a bit of rice in and grind (7)
{LEGWORK} – a verb meaning to set is reversed (up, in a down clue). Follow this with the pan of choice of Ken Hom with a bit of R(ice) inside. The whole thing is a boring task involving a lot of travelling (grind).

3d  Lift end of pen and get last forgotten pig out (5)
{BINGE} – this is a verb meaning to pig out. Reverse (lift) the pointy bit at the end of a pen and follow this with GE(t) with its last letter forgotten.

4d  What’s fixing rate I go with a derailleur ultimately (4,5)
{GEAR RATIO} – a semi-all-in-one determines the relationship between the speed of a driving mechanism and the speed of what’s being driven (e.g. the wheels). It’s an anagram (fixing) of RATE I GO with A and (derailleu)R. 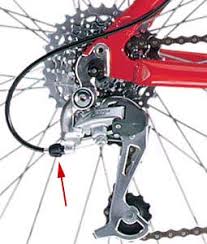 5d  Inconclusive charge for south Asian (5)
{INDIC} –a verb meaning to charge with a crime loses its final T (inconclusive) to leave an adjective describing something from the sub-continent.

7d  Control of sugar abuse reduced inches (7)
{INSULIN} – the definition is control of sugar, i.e. the hormone which controls your blood-sugar level. It’s a verb meaning to abuse or disparage without its final T (reduced) followed by the abbreviation of inches.

8d  Properties of cyber-domains? (7)
{ESTATES} – double definition, the second (1-6) a cryptic description of what subsets of the internet might be called.

14d  Speed counter goes on here? (9)
{DASHBOARD} – another semi-all-in-one identifying where you might find a speed counter. We want a charade of synonyms for a verb to speed and a counter.

16d  I had to leave petrol plant — it’s to do with the smell (9)
{OLFACTORY} – an adjective meaning relating to the sense of smell is formed from synonyms for petrol and plant put together with the I dropped (had to leave).

17d  Wise old man’s leading the way (7)
{PASSAGE} – an adjective meaning wise is preceded (leading) by a diminutive for father (old man) and the ‘S to make a narrow way.

18d  More crawling from French king, turning tail before English queen (7)
{LOUSIER} – the definition is more crawling, i.e. infested to a greater degree. Start with the name of many kings of France and reverse the last two letters (turning tail), then add the initials of an English queen. Since the clue specifies English rather than British we’ll assume it refers to our current Queen’s earlier namesake.

20d  Haunts page on web address that is not age-restricted (7)
{PURLIEU} – a word for a person’s usual haunts is a charade of P(age), the abbreviation for a unique address on the web, the abbreviation meaning that is and a film category denoting no age restrictions.

23d  Ray seen around river must be a different fish (5)
{BREAM} – a synonym for ray of light goes around R(iver) to make a freshwater fish.

24d  Giant cat running round centre of Prague (5)
{MAGOG} – this is one of a pair of mythical giants appearing widely in religion, mythology and folklore. For example, they were supposedly the last two survivors of a race inhabiting Britain in pre-Roman times. Put an informal name for a cat around the middle two letters of Prague.

I had difficulty picking out a short list of the clues I liked (because I like them all) so I’ll just highlight the one I liked best of all which was 11a. Let us know what you liked in a comment!