One of our mystery setters has produced a puzzle that gave me little pleasure. There were one or two good clues, but I had seen them before which rather took the edge off.  [Subsequent to writing this, it turns out that Allan Scott, aka Campbell, is the setter.]

5a    Extremely fashionable black suit (2,6)
{IN SPADES} – a phrase that means extremely is a charade of a word meaning fashionable and a black card suit

12a    Mistake made by fielder at Oxford? (4-2)
{SLIP-UP} – this mistake is a charade of a cricket fielder and a word meaning in residence at university 15a    Verse by Forster used in a song and a prayer (3,5)
{AVE MARIA} – put V(erse) and the initials of the author of A Passage to India inside A and an operatic song to get a prayer used in Catholic worship

19a    Before end of encounter, draw level (4)
{TIER} – put a draw, as in a match where no side wins, in front of R (the last letter of encounteR) to get a level or stage
19a    Draw rand out of bank (4) (dead-tree version)
for the newspaper version, draw is as in the CluedUp version and it’s followed by R(and) to get a bank

23a    Work out problem (8)
{EXERCISE} – a straightforward double definition

26a    Pancakes – declines cold ones (4,6)
{DROP SCONES} – these Scotch pancakes came up on Eggheads recently! – a word meaning declines is followed by C(old) and ONES

27a    One may get led astray in just this sort of district! (3-5)
{RED-LIGHT} – a cryptic definition of put an anagram of LED inside a synonym for just to get a district in which ladies of the night operate – this turned out to be a better clue than I had realised; thanks to Allan Scott, the setter, for pointing this out 2d    European city, for example, featured in story (5)
{LIÈGE} – this Belgian city is created by putting the Latin abbreviation of “for example” inside a story or falsehood

3d    Feel elated having small part broadcast (4,2,3)
{WALK ON AIR} – a phrase meaning to feel elated is a combination of having a small part in a play and to broadcast

6d    Serving up endless wine is ominous (8)
{SINISTER} – reverse an aromatic Greek wine, without its final letter (endless), and IS to get a word meaning ominous

14d    Good hand from capacity crowd (4,5)
{FULL HOUSE} – another double definition – a hand at poker consisting of three of a kind and a pair or a capacity theatre crowd 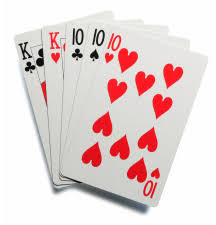 16d    Vegetable all right to be eaten by ambassador on the wagon? (9)
{ARTICHOKE} – a grey-green flower-head, served as a vegetable, comes from the two-letter word meaning all right inside (to be eaten by) the form of address given to an ambassadors after a shortened form of a large wagon – it’s that debatable use of “on” in a down clue again; whatever the crossword editor says, I still don’t like it Look out for a new Toughie setter today. It’s about the same difficulty as this one, so why not have a go?