Good morning from South Staffs, where after a fine, sunny start to the day the latest instalment of what we used to call equinoctial gales before they gave them fancy names has blown in and it’s pouring with rain.

There was nothing particularly out of the way about today’s Giovanni, though there did seem to be a lot of Lego-type clues, judging from the number of times my hints say ‘followed by’ or ‘put together’.

1a           Supply prisoner with words of commendation (10)
CONTRIBUTE – One of the usual prisoners followed by a speech of praise or eulogy.

6a           Ace getting married is emotionally overwhelmed (4)
AWED – The letter found in the corner of an ace in a pack of cards, followed by another verb for ‘married’.

9a           Tree in line a knight hides behind (5)
ROWAN – A straight line of people or things followed by A (from the clue) and the chess notation for a knight.

10a         Number here with heartless interceptions — grasping types (9)
TENTACLES – The number of this clue followed by the sort of interceptions made when one rugby player stops another, with the middle letter removed (heartless). 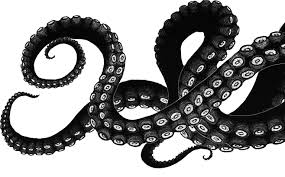 12a         Oriental festival the beginning of November (7)
EASTERN – A Christian festival in March or April every year, followed by the first letter of November.

13a         Show initiative after quiet appeal (5)
PLEAD – The musical symbol for quiet followed by ‘show initiative’ or ‘take charge’.

15a         Show drama beginning with hellish location (7)
DISPLAY – An alternative name for the Greek god Pluto, and by extension the name given to his kingdom, followed by a staged drama.

17a         Flounder as man at party, finally upsetting top lady (7)
STAGGER – Put together a man at a male-only party, the last letter (finally) of upsettinG, and the regnal cipher of our monarch.

21a         Bird the woman’s tucked into, something smoked (7)
CHEROOT – A water bird wrapped around the pronominal adjective for ‘the woman’s’.

22a         Is word of disapproval backfiring for African? (5)
TUTSI – Put together IS (from the clue) and an expression of disapproval, then reverse the result (backfiring) to get a member of an African people found in Rwanda and Burundi.

24a         Attack impudent talk about parrot (7)
PILLORY – Reverse (about) some impudent talk or sauce, then add a type of parrot. This is the sort of attack where someone is exposed to public ridicule. 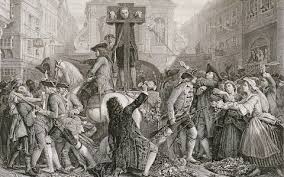 30a         Job is troubled with angst with chaps interrupting (10)
ASSIGNMENT – Anagram (troubled) of IS and ANGST, wrapped around some chaps.

2d           State requirement after moths have invaded wardrobe? (3,6)
NEW JERSEY – This US state is what you may need after the moths have ruined your favourite sweater.

4d           Like fatty food in college pantry? (7)
BUTTERY – This word for a place where food and drink were dispensed in an Oxford or Cambridge college, derived from the French for ‘bottle’, could also describe food rich in a dairy fat.

5d           Letters may inform them of legal requirements (7)
TENANTS – Here we have an ‘all in one’ clue. The letters are people who let, rather than written communications, and the answer (them) is the people to whom the letting is made.

7d           Writer has extra line fitting in (5)
WILDE – A cricket extra wrapped around Line, giving us a Victorian writer and dramatist.

8d           Some French notion about traitor supplying essential requirements (10)
DESIDERATA – Put together the French for ‘some’ and a notion or concept wrapped around an informal word for a traitor.

14d         Notice five workers keeping time — rewards offered (10)
ADVANTAGES – Put together a short form of a publicity notice, the Roman numeral for five, and some of the usual insect workers wrapped around a long period of time.

16d         Dafter ladies maybe where seaside entertainment takes place? (7)
LOOPIER – A familiar term for the Ladies or Gents, followed by a seaside structure which may have a theatre at the end of it.

18d         Small room in house left half abandoned, wonderful thing earlier (5,4)
GLORY HOLE – The second word is made up of an abbreviation for HOuse and the first half of LEft. The first word is an object of pride or splendour.

21d         Big figures in firm, one going down after failure (7)
COLOSSI – Put together the abbreviation for a firm or company, a failure to win or make a profit, and the Roman numeral for one. 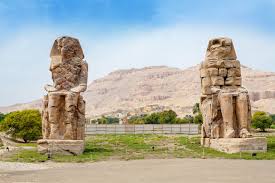 23d         Mum grabbed by sailor in river (5)
TAMAR – One of the usual sailors wrapped around another word for Mum, giving us the river which divides Cornwall from England.

25d         A church musician may have such an ear? (5)
ORGAN – Double definition: an instrument often used in church music; or a part of the body such as an ear.