Thanks to Deep Threat for doing a swap with me this week – he’ll be here on Friday. I solved most of this puzzle in 2* time or less but was held up by my last couple of clues in the NW quadrant so I ended up giving it 3* for difficulty. How does that correspond with your experience?
If you want to see an answer just highlight the gap between the brackets under the troublesome clue.

2a  An expert at assessing faults? (12)
{SEISMOLOGIST} – cryptic definition of a scientist. The faults being assessed are in the earth’s crust.

8a  Measure of insulation found with a traditional dress (4)
{TOGA} – a measure of the insulating properties of a duvet, say, followed by A.

10a  Flower getting spread around island past its best? (8)
{MARIGOLD} – this spread is a type of butter substitute. Put it around the single-character abbreviation for island then add an adjective meaning past its best or over the hill.

11a  Rear royal figure to stop progress (6)
{HINDER} – an adjective meaning at the rear is followed by the letters used to identify our most senior royal figure.

12a  Pollution from pass encountered around North (10)
{DEFILEMENT} – start with a long narrow pass and add a verb meaning encountered containing N(orth).

13a  Catch criticism faced by part of hospital (6)
{ENTRAP} – an informal word for a sharp criticism is preceded (faced) by the abbreviation for the only hospital department that we ever see in Crosswordland.

17a  Put aside old novel with affection, nothing less (6)
{SHELVE} – the title of an old novel by the splendidly-named Sir Henry Rider Haggard (presumably known to his mates as HRH) is followed by a synonym for great affection with the letter that resembles zero or nothing taken out. 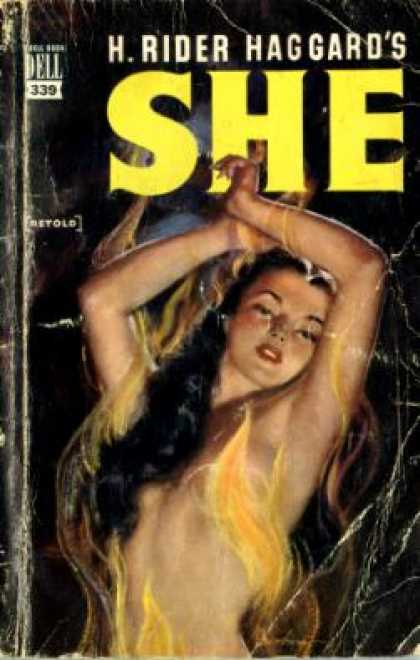 18a  Prim woman calms room after disorder around hotel (10)
{SCHOOLMARM} – this is a Northern American term for a female teacher, traditionally thought of as being dowdy, prim and pedantic. The word is an anagram (after disorder) of CALMS ROOM containing the letter that the codeword hotel is used for in the Nato Phonetic alphabet.

21a  Fastening material concealed by level crossing (6)
{VELCRO} – concealed in the clue.

23a  Vulgarity endures sadly with first of sketches (8)
{RUDENESS} – an anagram (sadly) of ENDURES is followed by the first letter of S(ketches).

24a  Old artist accommodated in remote old state (8)
{COLORADO} – O(ld) and the abbreviation for a Royal Academician (artist) are inserted (accommodated) in an adjective meaning remote or aloof, then finish with another O(ld).

25a  Spell in Italian city I relinquished (4)
{TURN} – remove the I from the name of a city in North-West Italy to leave a spell or stint.

26a  Autonomy obtained by more than one paper, we hear (12)
{INDEPENDENCE} – sounds like (we hear) more than one copy of a national newpaper.

1d  Comfort in putting up very large ornamental material (6)
{SOLACE} – reverse (putting up, in a down clue) the abbreviation used for ‘very large’ in clothing sizes and add a delicate ornamental fabric.

2d  Ridiculing poor trails about London gallery (9)
{SATIRICAL} – put an anagram (poor) of TRAILS around the abbreviation for a London gallery.

3d  Trainer might have this popular fish (6)
{INSOLE} – combine words for popular (2) and a type of fish (4) to make what a trainer (or other types of footwear) might contain.

5d  It can be killing with no end of jokes? (8)
{LAUGHTER} – this is an all-in-one but I’m not sure that it works terribly well. The wordplay requires us to remove the end letter of (joke)S from the start of a word meaning killing or butchery. The definition (i.e. the whole clue) is a reference to a statement such as ‘I killed myself ******** at the jokes’.

7d  Impudence shown by childish character — it can make you stew! (8)
{SAUCEPAN} – a charade of a word meaning impudence or cheek and the Barrie character who never grows old and forever remains a child.

15d  Fit into tight space and get clipped holding gardening tool (8)
{SHOEHORN} – a past participle meaning clipped (like a sheep) contains a gardening tool.

16d  Dreary tea sold improperly close to cafe (8)
{DESOLATE} – an anagram (improperly) of TEA SOLD is followed by the closing character of (caf)E.

19d  Peculiar relative? That’s very likely! (4-2)
{ODDS-ON} – bit of an old chestnut. Join together an adjective meaning peculiar and a male relative to make what has a better than 50-50 chance of happening.

20d  Holiday destination in October emptied among others (6)
{RESORT} – O(ctobe)R without its internal letters (emptied) goes inside another word for others.

22d  Divided  segment of garlic (5)
{CLOVE} – double definition. The first is the past tense of a verb which means to divide or split. Just to make the English language interesting there is another verb with exactly the same spelling which means the exact opposite, i.e. to come together or unite.

My top clues today were 10a and 7d. How about you?