This is a very enjoyable puzzle from Elkamere but not, for me anyway, any less difficult than his last Toughie which appeared in the feared Friday slot. If we get this on Wednesday what’s in store for the rest of the week?
Do leave a comment telling us what you liked or disliked and how you got on.

1a  He’s keen to introduce part of lyric poem (7)
{STROPHE} – this is the first section of an ancient Greek choral ode. HE is preceded (to introduce) by a verb meaning to keen or sharpen.

5a  Returning shots, posh girl’s breaking ball (3,4)
{LEG SPIN} – this is a type of cricket delivery. String together shots (of liquor) and an upper-class girl then reverse (returning) it all.

9a  Unfinished joint — leave tongue (5)
{LINGO} – drop the last letter (unfinished) from a joint (in a chain, perhaps) and follow this with a verb to leave.

10a  Recklessly smashed the fences around hollowed out trees (4-5)
{HEAD-FIRST} – an anagram (smashed) of THE contains (fences) A(roun)D (hollowed out) and evergreen trees.

11a  Seafood spread in crispbread (6,4)
{SPIDER CRAB} – an anagram (spread) of CRISPBREAD. 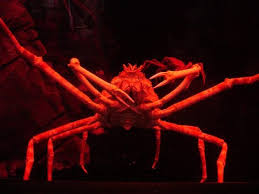 12a  Ducks out of tour of manor (4)
{TURF} – this is a patch or area of influence ‘belonging’ to a person or group such as a gang. Take the letters that look like ducks (zeros) out of ‘tour of’.

18a  Stuffed  shirts may be so lined? (4,3,2,3)
{HUNG OUT TO DRY} – double definition. The first meaning left in a vulnerable situation and the second how shirts may be pegged out on a line.

21a  I live in the mountains and I happen to get by (4)
{IBEX} – string together I (from the clue), a verb meaning to happen and the sign of multiplication (by).

22a  Closely follow cricketers, side securing runs (10)
{SLIPSTREAM} – close fielders at cricket are followed by a side with R(uns) inside (securing).

25a  Not sure flabby American is energetic (9)
{STRENUOUS} – an anagram (flabby) of NOT SURE is followed by an abbreviation for American.

26a  River party finds plant blight (5)
{UREDO} – I didn’t know this word for a rust-fungus but after getting the initial checking letter it was straightforward. It’s a North Yorkshire river followed by a festive party.

27a  Reason trifle turns green? (7)
{WITLOOF} – I didn’t know this word either. It’s a broad-leafed variety of chicory and so can be classified as a green vegetable, but it has a white leaf (that’s a hint) so that presumably accounts for the question mark. A synonym for reason or common sense is followed by the reversal (turns) of a cold dessert. I wouldn’t have called this dessert a trifle for which I thought sponge cake was an essential ingredient, but if Nigella wants to leave a comment telling me I’ve got it wrong I’m quite prepared to discuss it with her. [Thanks to Shahriar Bader for pointing out what I should have seen – trifle here is a verb not a noun].

28a  Northerners in English film with huge following (7)
{ESKIMOS} – I’m sure that most of us learnt this word for the people living in the snowy regions of the far north at school, but I found out recently from one of Falcon’s blogs that it is regarded as non-PC and pejorative in Canada. String together E(nglish), a word for a thin layer or film covering a surface and the abbreviation for a huge clothing size.

3d  One standing in for man or father (10)
{PROGENITOR} – a prefix meaning for or in favour of and an informal term for a man of good social standing have I (one) inserted, then we finish off with OR.

4d  City will accept most of this moral code (5)
{ETHIC} – the London postal area in which the City is situated contains (will accept) all but the last letter of THI(s).

5d  Dog runs around with ball — gets one swallowed (5,4)
{LHASA APSO} – a verb meaning runs around (an athletic track, say) is followed by the letter that looks like a ball. Now insert (swallowed) a verb meaning gets or acquires and A (one). Earlier on this answer was wrong on the on-line site which insisted that the second letter was L – this may now be corrected.

6d  Digs using hook (4)
{GAFF} – double definition – a slang term for where one lives and a hook used for landing a large fish.

7d  A timer used primarily on bank alarms (8)
{PERTURBS} – Start with a word meaning a (as in ‘£2 a kilo’) then add the prime letters of Timer Used and the once-proud Scottish bank brought low by Fred the Shred and his cronies.

8d  Picture file that is in sign, I am told (8)
{NOTIFIED} – one of the variants used as the suffix to identify a picture file in tabbed image file format and the abbreviation for that is go inside a visible sign of assent (in response to a question like ‘Are you in agreement?’).

13d  Impressed by famous son’s opening kick in fight (4-6)
{STAR-STRUCK} – S(on) gets inserted (opening) in a verb meaning to kick in or begin, then finish with a slang word for a fight or brawl.

17d  Nobody keeps soldiers under cover (2,6)
{IN SECRET} – a metaphor used for an insignificant person or nobody contains (keeps) the abbreviation for some soldiers.

19d  Note given to judge: Acquit (6)
{REDEEM} – the second note in tonic sol-fa is followed by a verb to judge or consider. The answer means to acquit in the religious sense of to pardon for sin.

20d  Stamp? A letter needs one on top (6)
{EMBOSS} – how one of the letters of our alphabet is spelled out is followed by a superior at work (one on top). Nice bit of misdirection with ‘on top’ making me at least initially think that the letter came last.

24d  One engineer not digging (4)
{INTO} – I (one) followed by an anagram (engineer) of NOT means digging in the sense of liking.