We have an entertaining puzzle from Beam with a few tricky bits of wordplay. Unusually there are no anagrams at all (makes a nice change). For the second day running we have one answer which also appears on the back page – is this the “theme of the week”?
Let us know how you got on and please take the time to register your enjoyment factor by clicking on one of the stars below.

1a  Son not dead in chance for redemption (6)
{RANSOM} – replace the D(ead) with S(on) in an adjective meaning chance or arbitrary.

9a  One is never odd or even (10)
{PALINDROME} – the last four words of the clue provide a fine example (one is ..) of this two-way sequence.

11a  Making certain squeal taking remedy end first (8)
{SECURING} – a verb meaning squeal (to the police, for example) contains (taking) a remedy with the end letter promoted to the beginning.

12a  Police beginning to wear rifles, they’re sometimes shot (6)
{RAPIDS} – the first letter of P(olice) is inserted (to wear) in a verb meaning rifles or searches to make the fast-flowing and turbulent part of a river. 15a  Adam’s female relative over around day one’s Fall (8)
{NOSEDIVE} – the definition here is the falsely-capitalised fall, in the sense of a headlong plunge. Stick together a) Adam’s female and b) a male relative, then reverse it all (over) and insert D(ay) and I (one).

18a  Body of iron enveloping criminal after exercise (8)
{FUSELAGE} – the chemical symbol for iron contains a slang word for a criminal after a verb meaning to exercise or employ.

19a  Single, thus depressed, wifeless (4)
{SOLO} – a synonym for thus is followed by an adjective meaning depressed without its final W(ife).

21a  In stir, lust possibly turning to handsome youth (6)
{ADONIS} – the handsome youth is formed from a word meaning stir or commotion followed by the reversal (turning) of what lust is one example (possibly) of.

23a  As ‘Three Blind Mice’ were portrayed? (8)
{DETAILED} – a past tense meaning portrayed or represented is also, cryptically, the state of the three blind mice after the carving knife had done its work.

25a  Kiss woman too and hug ends (4)
{SNOG} – the whole clue gives a fairly loose definition of the activity formed from the end letters of four of the words.

27a  The House of Lords certainly isn’t supreme (8)
{PEERLESS} – an adjective meaning supreme is also a cryptic definition of what the House of Lords currently isn’t (although there’s a small chance that may change).

2d  Stun fantastic woman on being replaced by sweetheart (5)
{AMAZE} – start with a mythical (fantastic) female warrior from ancient Greece and replace the ON with the heart of (sw)E(et). 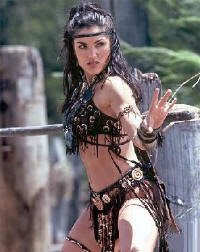 3d  ‘Lay Down Sally’ initially done in end, overdue (9)
{STIPULATE} – the definition here is lay down or specify. The initial letter of S(ally) is followed by words meaning end and overdue containing the letter used to mean socially acceptable or the “done” thing.


4d  City ‘done’ on trip unfinished (6)
{MADRID} – this capital city comes from a past participle meaning done or effected followed by a trip or journey, both words losing their final E (i.e. unfinished).

5d  Unions provoked by imminent firings? (7,8)
{SHOTGUN WEDDINGS} – cryptic definition of unions where the groom is perhaps less keen on the ceremony than his prospective father-in-law.

6d  Abnormal swell experienced in vessel (8)
{ANEURYSM} – there are two ways of spelling this word but the one I’ve given is the one accepted by the on-line site. It’s a cryptic definition of an abnormal swelling in a vessel of the human body.

7d  Tart up from Reading controlled by fancy man (5)
{PRIMP} – this is a verb meaning to tart up or dress in a titivating manner. Insert R(eading) inside (controlled by) a prostitute’s fancy man.

8d  Reckless last days admitting time’s up (4-5)
{DARE-DEVIL} – the definition here is reckless. A verb meaning to last or survive is followed by a couple of D(ays) with a period of time inside (admitting). Finally we have to reverse the lot (up, in a down clue).

14d  ‘Bounty’ sailor Christian finally in upstart shindig (9)
{ABUNDANCE} – the definition is bounty or a generous amount. Start with an abbreviation for sailor, then insert the final letter of (Christia)N between the start letter of U(p) and a lively party or dance. Purists will not like upstart being used to clue U (or the use of sweetheart in 2d).

16d  Notice girl in dark, sharing male (9)
{DISMISSAL} – we want a word meaning notice (as in “the sack”). An unmarried girl goes inside an adjective meaning dark or gloomy. This would normally result in a double-M but a single M(ale) has to be shared between the two so the second M is dropped.

20d  Apprehension kept woman off motorway (6)
{STRESS} – start with a kept woman or “bit on the side” and remove (off) the London-Leeds motorway.

22d  Country’s monarchy overturned with military man rising (5)
{NIGER} – reverse (overturned) the rule of a monarch then reverse again (rising) the two letters inside this which are the abbreviation for a US soldier to make a country in West Africa.

24d  Bolt’s final of hundred-metre run (5)
{ELOPE} – a verb to bolt (with the intention of getting married) comes from the final letter of (hundred-metr)E followed by another verb to run.