As promised, a double dose of Ray T this week. What you see is what you get!

1a    Bogus cure, often it’s dodgy (11)
{COUNTERFEIT} – a nice easy start with a word meaning bogus being an anagram (dodgy) of CURE OFTEN IT

10a    French you go off backing teacher (5)
{TUTOR} – the French for you (singular / affectionate) is followed by a word meaning to go off reversed (backing) to get a teacher – Ray T teaches English in Paris!

11a    Top decoration for officer? (9)
{EPAULETTE} – a decoration on the shoulder of an officer’s uniform 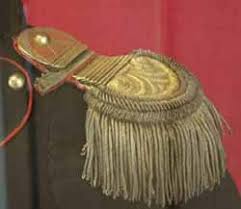 12a    Sacrament from curate and his congregation (9)
{EUCHARIST} – the Christian sacrament commemorating the Last Supper, in which bread and wine are consecrated and consumed, is an anagram (congregation) of CURATE and HIS

13a    After midnight, space for curry (5)
{GROOM} – nothing to do with Indian cuisine! – the middle letter of niGht is followed by some space to give a word meaning to curry or smarten a horse

16a    Rough house in gaol, out of control (8)
{HOOLIGAN} – a rough or troublemaker is built up from HO(use) and an anagram (out of control) of IN GAOL

20a    Good man going to North European breakwater (6)
{GROYNE} – not the usual good man (as in 8 down), but G(ood) and a three-letter man’s name is followed by N(orth) and E(uropean) to get a breakwater

24a    Sign the man’s hiding inside depository (9)
{THESAURUS} – put a zodiac sign (mine, as it happens!) around (hiding inside) HE’S (the man’s) to get a depository of words

5d    Part of ‘ginger group’, including redhead (8)
{FRACTION} – a part or small piece is created by taking a ginger group formed of dissenting members of a larger group and inserting R (Red head)

7d    Production of pavement artist? (6,7)
{STREET THEATRE} – this dramatic entertainment is possibly performed on the pavement

9d    Disease from microbe, a nameless disorder (6,7)
{GERMAN MEASLES} – this disease is constructed from a microbe followed by an anagram (disorder) of A NAMELESS

17d         Last of Bacardi put in bird’s drinks (8)
{MARTINIS} – I (last of BacardI) is put inside a bird, not forgetting the ‘S, to get these cocktails made from gin and dry vermouth

19d         Conclude, over my dead body, in Hell (7)
{INFERNO} – a word meaning to conclude or deduce is followed by a rather less emphatic negative than “over my dead body” to get Hell, Dante style

Well up to Ray T’s usual standard, but a tad easier than most.