Toughie No 748 by Petitjean

A Good Run Out

I enjoyed this puzzle from Petitjean and I thought it was pitched at just the right level of difficulty, though its cricketing references may make it a bit trickier for those unfamiliar with the Summer game.
Let us know how you got on and please take the time to signal your enjoyment factor by clicking on one of the stars below.

1a  Coup as Manx cat brought about end of rat before church (6)
{PUTSCH} – a Manx cat has no tail so we want an informal word for a cat without its final S. This goes round the end letter of (ra)T, then finish with an abbreviation of church.

5a  Injured Ponting almost stopping practice session comeback (8)
{STRICKEN} – the definition here is injured. The forename of the recent Australian cricket captain Mr Ponting gets truncated (almost) and this is inserted (stopping) in a practice session for batsmen which has to be reversed (comeback).

9a  Local development opponent against Lincolnshire town switching memorial’s boundaries admitting nothing orally (3,2,5)
{NIL BY MOUTH} – this is a note that you may see above a patient’s bed in hospital (also the title of a 1997 British film starring Ray Winstone). We want an acronym for someone who comes up with many reasons why a proposed sewage plant, mental hospital, telephone mast or whatever should not be sited anywhere near where he lives, followed by a town in the Lincolnshire Wolds. But there’s more – the extreme (boundaries) letters of M(emoria)L have to be switched.

10a  Music producer loves capturing big opening chord (4)
{OBOE} – a musical instrument comes from a couple of letters that look like zero (loves) around (capturing) the opening letter of B(ig), finishing with a musical chord.

11a  Long jumper perhaps put on strip before covering Nike top (8)
{KNITWEAR} – a long (or even short) jumper is an example of this. A verb to put on clothes is preceded (before) by a sports strip containing (covering) the top letter of N(ike).

12a  Maybe Prince of Wales will accept cost over stay (4,2)
{BEEF UP} – this is a phrasal verb meaning to stay or strengthen. What Prince of Wales is an example of contains (will accept) a synonym for cost charged, then the whole lot has to be reversed (over).

13a  Half-hour in support group produces advance warning of migraine (4)
{AURA} – this was my last answer as I didn’t know that this word can mean ‘the peculiar sensations that precede an attack of epilepsy, hysteria or certain other ailments’. Put half of the word hour inside a support group for those trying to stay on the wagon.

15a  Rocky hit in advance by Ragin’ Bull, causing disgust (8)
{LOATHING} – an anagram (rocky) of HIT goes inside a monetary advance, then finish with the central (bull?) letter of (ra)G(in). Bull is of course the central bit of a target in archery or darts but what do you think of it as an instruction to use the middle letter?

18a  Attempting the ultimate spinning top with saw (8)
{ESSAYING} – the ultimate letter of (th)E and the top letter of S(pinning) precede a saw or proverb.

19a  Barmaid established bottles date from Roman time (4)
{IDES} – hidden (bottles) in the clue is a Roman day.

21a  This prompts one to bring up English setter’s show of nerves (6)
{EMETIC} – something that makes one bring up is a charade of E(nglish), how the setter refers to himself and a visible nervous twitch. 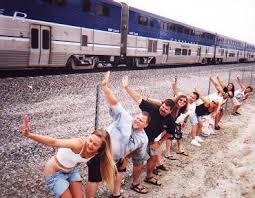 25a  Article recalled imperial rule lacking closure (4)
{AJAR} – ‘When is a door not a door?’ as the old Christmas cracker joke had it. Start with an indefinite article then reverse (recalled) a word for imperial rule in India.

27a  Magnetism some research discovered in coins (8)
{PRESENCE} – an abbreviation (some) of research goes inside (discovered) in small coins to make a synonym of magnetism or charisma.

2d  Small number in university backing students’ club (5)
{UNION} – string together the abbreviation of number, IN and U(niversity) then reverse (backing) the lot.

4d  Play arrangement of unfinished Mahler Concerto No 7 (6)
{HAMLET} – an anagram (arrangement) of MAHLE(r) is followed by the seventh letter of concerto.

5d  Escort taking in bogus earl — and her second mug is a judge (6,3,6)
{SQUARE LEG UMPIRE} – this is the second clue that may cause gnashing of teeth among non-cricket lovers. The judge is one of the two on the cricket field. A verb meaning to escort a lady goes round (taking in) an anagram (bogus) of EARL, the second letter of (h)E(r) and a dialect word for a mug or foolish person.

6d  Itinerant worker featured in a number of papers revealing a lot of bottle (8)
{REHOBOAM} – a mainly North American word for an itinerant workman goes inside (featured in) about 500 sheets of paper to make a wine bottle six times the standard size.

7d  Characters in revival of ‘Under The Volcano’ creating split (5)
{CLOVE} – those with a decent memory may remember this word from yesterday’s Toughie. It’s the past tense of a verb to split and it’s hidden (characters) and reversed (in revival) in the clue.

14d  Officer pursuing occasional guardsman’s heavenly body (4,5)
{URSA MAJOR} – scandal in the barracks? No, the heavenly body is a constellation – a military officer follows the even (occasional) letters of guardsman.

16d  Many old in Hawaii vote over independence (3,6)
{HOI POLLOI} – this is a phrase, from Greek, meaning the many or the masses. Insert O(ld) in the usual abbreviation for Hawaii, then follow this with a synonym for vote, O(ver) and I(ndependence).

22d  Tottenham’s underachieving Rafa produced scoring headers showing spirit (5)
{TURPS} – I’m not sure whether it’s true that Rafa van der Vaart is underachieving or not. This is the abbreviation of a spirit used a lot by interior decorators, and it comes from the heading letters of five consecutive words in the clue.