Hello from the Vega Baja where it is raining cats and dogs with some spectacular thunder and lightning and my garage roof has started leaking again!

I think this one is a little trickier than recent Wednesdays so I’ve gone for 3* difficulty. I’m sure that some of you will disagree but I think you will agree it’s quite a fun puzzle. 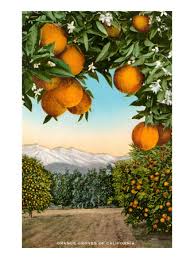 10a.    Top member of coven showing desire (4)
{ITCH} – Top here is a verb meaning ‘ to remove the top’. Take a member of a coven and remove the first letter to leave a word meaning desire or yearning.

14a.    Commercial break making a difference? (5,3)
{TRADE GAP} – I’m not really sure how to describe this one! It’s a word for commerce (5) followed by a word for break or space (3) to get a phrase describing the difference between a country’s imports and exports.  If anyone can do better please let me know!

15a.    Trouble’s common, by the way (6)
{STRIFE} – Definition is trouble. Take a word for common or widespread and place it after (by) the usual  abbreviation for way or road.

17a.    Recover couple of recipes requiring vessel to hold duck (6)
{RECOUP} – Take RE (couple of REcipes) followed by a vessel, from which I’m currently drinking tea, around O (duck) to get a word meaning recover or get back.

22a.    Engineers can — with a bit of a looker (6)
{RETINA} – Take the usual engineers followed by another word for a can, of baked beans perhaps, and A (from the clue) to get a bit of the eye (looker).

23a.    A guess in case of dangerous enterprises (10)
{ADVENTURES} – Definition is enterprises. Start with A (from the clue) and then place a word which can mean guess or suppose inside DS (case of DangerouS).

24a.    Bearing one in pieces (4)
{MIEN} – A word meaning bearing or demeanour is some pieces, from a chess board perhaps, with I inserted (one in).

25a.    One may seek buyers for noisy basement (6)
{SELLER} – This person who needs a buyer sounds like (noisy) an underground room at the bottom of your house.

1d.    They may encourage ginger before lopping top off stems (3,5)
{PEP TALKS} – These are things which may encourage, given by a football manager at half time perhaps. Take a word for ginger, as in energy, and then a word for stems without its first letter (top off).

2d.    Principal hospital supporting a church (4)
{ARCH} – Principal, as in your principal enemy, is H(ospital) place after (supporting in a down clue) A (from the clue) and the abbreviation for the church of Rome.

3d.    Ducks die off and fighters lose struggle (6)
{EIDERS} – These ducks are an anagram (off) of DIE followed by ERS (what you are left with if you take fight (struggle) out of the word fighters). 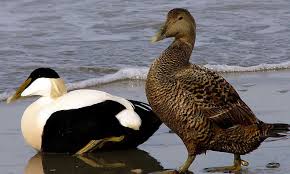 4d.    The frequency of an extended farewell? (4,4)
{LONG WAVE} –This radio band, where you get Test Match Special, is a word for extended followed by a gesture you might make when saying goodbye or leaving.  I suppose that this is really a wavelength rather than a frequency but it’s OK by me.

5d.    Desperate attempt to survive Benidorm? (4,6)
{LAST RESORT} – A phrase for a desperate or final attempt is a charade of a word meaning survive or continue and something of which Benidorm is a well known example.  Pommette and I are going there for a few days over Christmas as it’s only about an hour’s drive from here. Whether we will survive is anyone’s guess! 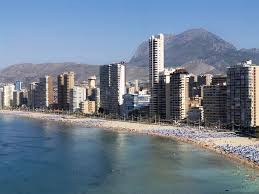 8d.    Source of lipids found in quickly-fried toast (6)
{SALUTE} –  Insert L (source of Lipids) into a dish cooked by quick-frying and you get a toast, as in honour.

16d.    Cause of breakdown in dull Lebanese port (4,4)
{FLAT TYRE} – Something which will stop your car is a word for dull or boring followed by a port on the coast of Lebanon, which was besieged by Alexander the Great in 332BC. Today’s bit of trivia! 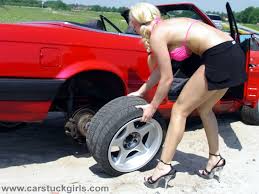 18d.    African organisation in huff with volunteers getting meat from Italy (8)
{PANCETTA} –A South African political organisation placed inside a word for a huff and followed by the usual volunteer soldiers gives a type of cured pork popular in Italy (and Spain). We had this word for huff only a few days ago!

21d.    Opens with love for one in pants (6)
{UNDOES} – Definition is opens. Take a word for pants, as in undergarments, and replace the I with an O (one for love).

24d.    Fitting, just without right bit of timber (4)
{MEET} – A word which can mean fitting or appropriate is a word for just, as in he’s just a boy, with the R removed (without Right) followed by T (bit of Timber). This is a new meaning of this word for me!

Photo opportunities are a bit limited again bit I’ve managed both a car and a girl in 16d!
I like the ones in blue but I think my favourites are 22a and 1d.