Toughie No 484 by Petitjean

I can’t pretend that I enjoyed this one a great deal (and I don’t think that’s just down to post-Ashes tiredness – well-done to the lads!). There is the usual CluedUp problem of having to hunt around to find the full enumeration for several clues, then we have no less than 13 anagrams to plough through. A bit 15d for me, although Petitjean would probably say “de trop” since he’s started to give his indicators in French! I’m sure that some people will have loved it so let’s have a full range of comments!
This is my last review of 2010 so may I wish everyone a Very Happy New Year – see you all in 2011.

9a  Animated anti-European entering in a row (7,2)
{LIVENED UP} – start with a phrase meaning in a row and insert (entering) V (anti, versus) and E(uropean) to make a phrasal verb meaning animated or instilled some spirit into.

11a  Herb garden out back of shed worked over at both ends (7)
{OREGANO} – this herb comes from an anagram (worked) of GAR(d)EN, with the last letter (back) of sheD taken out, with O(ver) (cricket term) at both ends.

12a  School day came unexpectedly (7)
{ACADEMY} – a posh school is an anagram (unexpectedly) of DAY CAME.

14a  Being single feels no different (7)
{ONESELF} – an anagram (different) of FEELS NO.

19a  Utter calm unexpectedly enveloping one meeting former partner (7)
{EXCLAIM} – a verb meaning to utter is an anagram (unexpectedly) of CALM around (enveloping) I (one) which follows (meeting) a former partner.

22a  ‘Warm and dry’ say the French about part of Africa (7)
{ALGERIA} – stitch together a verb to warm and dry clothes, the abbreviation for say and a French definite article and then reverse the lot (about) to make a North African country which was once under French rule.

24a  ‘Brideshead Revisited’ following Flyte’s terminal decline (3)
{EBB} – the definition is decline. Put two instances (revisited) of the first letter (head) of B(rides) after the last letter (terminal) of (Flyt)E. Some will object to the way both the Bs and the E are clued but both seem fine to me.

25a  Extract of jalapeno’s trumpeted as cure-all (7)
{NOSTRUM} – a cure-all may be extracted from the clue.

26a/10a  Daniel Lanois produced ‘Midnight At The Oasis’ for one popular duo (4,3,5)
{STAN AND OLLIE} – the forenames of a comedy duo are an anagram of DANIEL LANOIS after one of the Is has been replaced by the middle letter of “night at The oasis”. Daniel Lanois is apparently a Canadian producer, so I assume that the surface is relevant but I don’t know how.

28a  Franco-German approval for board (5)
{OUIJA} – a very old chestnut requiring the word for yes in the two languages.

29a  Stoke finally hit net in frenetic last minute of match (9)
{NINETIETH} – the last minute of a football match (assuming that’s there no time added on or extra time) is an anagram (frenetic) of (Stok)E HIT NET IN. 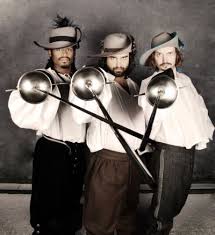 2d  Knievel flipped 180 degrees over earth embankment (5)
{LEVEE} – the famous stuntman’s forename is also part of his surname but I think that it’s the forename we need to reverse (flipped 180 degrees). This precedes (over, in a down clue) E(arth) to make an embankment seen in the lower reaches of the Mississippi.

3d  French wine label — Coeur de Pomerol — denoting quality of contents (7)
{VINTAGE} – a charade of the French word for wine, a label and the central letter (Coeur, heart) of PomErol produce a word used to describe the year and provenance of wine. As far as I can make out Coeur de Pomerol is not a single wine but the name under which a dozen fine wines from the Pomerol region near Bordeaux are marketed (I’m sure that our very own French wine connoisseur, Monsieur Libellule, will correct me if I’ve got this wrong).

4d  Head for the sunset in battered Ford Fiesta coupé (4,3)
{RIDE OFF} – having started using French for his indicators our setter ploughs on with coupé to mean cut in half. An anagram (battered) of FORD FIE(sta) means to head into the sunset like the hero at the end of a Western.

7d  Upright citizens not welcome in Whitehall’s eateries (3-6)
{ALL-SEATER} – an adjective applied to a sports ground, say, to indicate that no standing is allowed, is hidden in the clue.

8d  Why a tendon never ruptured — or only occasionally (5,3,3,4)
{EVERY NOW AND THEN} – a phrase meaning occasionally is an anagram (I am getting sick of these) indicated by ruptured of WHY A TENDON NEVER.

15d  Vivid fringes of poplar succumb to cold beyond the norm (9)
{EXCESSIVE} – start with an adjective meaning vivid. The outer letters (fringes) of PoplaR are replaced by (succumb to) C(old) to end up with a word meaning beyond the norm.

16d  Nigella used up evenly in floral arrangement (3)
{LEI} – get hold of Nigella and turn her round (used up, in a down clue). Now just take the even letters to make a Polynesian garland of flowers. I thought you’d prefer a picture of Nigella to some floral arrangement!


21d  Washed-up Eminem without single to record (7)
{MEMENTO} – an anagram (washed-up) of EM(i)NEM (without I, single) precedes TO to make an object kept as a record or reminder.

22d  Hard stuff beneath muscles is abnormally thin (7)
{ABSINTH} – after (beneath, in a down clue) an abbreviation for abdominal muscles goes an anagram (abnormally) of THIN to make an alcoholic spirit once banned because it was deemed to be so dangerous.

23d  Germany supporter is not one to take it easy (7)
{GRAFTER} – a hard worker is G(ermany) followed by the sort of supporter you may find in your roof.

27d  Be well and happy, inconstant at heart, and bloom (5)
{AVENS} – an interjection meaning be well and happy (used a lot in the Roman Catholic Church) is followed by the middle two (at heart) letters of incoNStant  to make a flowering plant.