Good morning from Woodbury in South Devon, where I’m staying while playing croquet at Budleigh Salterton this week.

I found this puzzle to be very much one of two halves. The top half went in quite quickly, but then I struggled to get going on the lower half, so well into *** time for me.

1a           Gather berries should be black to go with waffle (7)
BRAMBLE – An abbreviation for Black followed by another word for ‘waffle’ or ‘go on at length’. 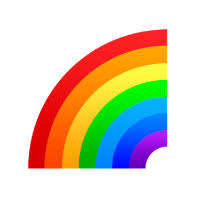 9a           Aunt still stripped off repeatedly, as before (5)
UNTIL – Remove the outer letters (stripped off) from the first two words of the clue.

10a         Two kinds of beach food to eat and unlimited music (4,1,4)
ROCK’N’ROLL – A sticky seaside treat, and a picnic staple which may contain ham or cheese, for example, placed either side of (a)N(d) (from the clue), with its outer letters removed (unlimited).

11a         Daughter getting into fancy cooking, losing sugary stuff (10)
CANDYFLOSS – Anagram (cooking) of FANCY, with an abbreviation for Daughter inserted, followed by another word for ‘losing’. 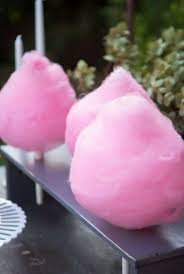 12a         A cutting politician’s flipped over — this writing’s unwelcome (4)
SPAM – The usual crossword politician, plus the ‘S from the clue, is reversed (flipped over), and A (from the clue) is inserted.

14a         How one may come out on top after taking a short cut (5-7)
CLOSE-CROPPED – Cryptic definition of a possible result of a visit to the barber.

18a         See papers united on ‘Keeping Up Appearances’ (4,8)
PEER PRESSURE – Put together another word for ‘see’ or ‘look closely’. A generic word for the newspaper industry. And the Latin word for ‘on’ or concerning’.

25a         Yearns to own Beatle’s old clothing? (4,5)
LONG JOHNS – Another word for ‘yearns’ wrapped round the first name of one of the Beatles, giving us some underwear. 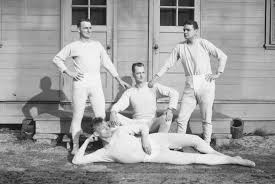 26a         Take a break every year and exercise (5)
PAUSE – The two-letter Latin abbreviation for ‘every year’ followed by a verb for ‘exercise’ or ‘employ’.

28a         Ruled roost previously — became cuddly (7)
NESTLED – Somewhere where a bird may roost, followed by another word for ‘ruled’ or ‘was in charge of’.

1d           Midday meal of ancient times, entertaining move by hotel (6)
BRUNCH – Wrap the two-letter expression indicating dates before AD around a word for ‘move (quickly), then add the letter represented by Hotel in the NATO alphabet.

2d           One of Rome’s famous rulers, some around 100 (6)
ANTONY – Another word for ‘some’ wrapped round an informal word for 100, in the context of scoring 100 runs at cricket, for example. The answer is one of the three men who formed a triumvirate to rule Rome after the assassination of  Julius Caesar. 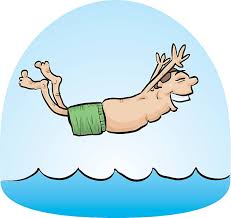 4d           Sign erected left or top right on map (5)
ENROL – Put together an abbreviation for Left, OR (from the clue), and the abbreviation for the compass direction indicated by the top right corner of a map (or a crossword grid!), then reverse the result (erected, in a Down clue).

5d           Scrap rifles — when loaded often they get worn at the rear (9)
RUCKSACKS – Another word for a scrap or fight (including a contest for the ball in Rugby Union), followed by another verb for ‘rifles’ or ‘loots’.

7d           Weapon whose user shows a lot of cheek (8)
BLOWPIPE – Cryptic definition of a primitive weapon where the user puffs out his cheeks before firing. 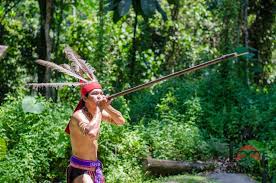 13d         Bad reaction of a grouser agitated about parking Sierra (4,6)
SOUR GRAPES – Anagram (agitated) of A GROUSER wrapped round the symbol for a car park, followed by the letter represented by Sierra in the NATO alphabet.

16d         Maybe diamond and pearls set to be worn by king and queen (8)
SPARKLER – Anagram (set) of PEARLS wrapped round the chess notation for a king, folloed by the Latin abbreviation for a queen.

17d         Sailor’s hand-made joint rocks offshore wader (4,4)
REEF KNOT – Some offshore rocks, such as the Great Barrier off Australia, followed by a wading bird of the sandpiper family.

20d         Charlie, installed in a post, gets rise (6)
ASCEND – A (from the clue) and a verb meaning ‘post’ or ‘despatch’ with the letter represented by Charlie in the NATO alphabet inserted.

23d         Writer of one’s bio turned up with nothing missing, twice (5)
IBSEN – Reverse (turned up, in a down clue) the third and fourth words of the clue, then remove the two instances of the letter which looks like a zero, and you get a Scandinavian writer.

24d         Article definitely in German, third from Merkel not being totally open (4)
AJAR – Put together an indefinite article, the German for ‘definitely’, and the third letter of MeRkel.