A review by Prolixic follows:

Out thanks to Starhorse for a nicely pitched lunchtime treat.

1 Very rude text? (4-6,5)
FOUR LETTER WORDS – The whole is described by a description of its constituted parts. 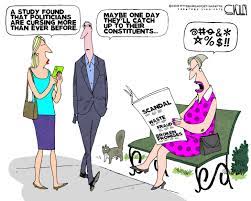 9 Row over French composer and Casanova? (9)
LIBERTINE – A four-letter word for a row or queue around (over) a five-letter name of a French composer.

10 One person elected by the Spanish Force (5)
IMPEL – The letter representing one followed by the abbreviation for someone elected to the House of Commons and the Spanish word for the.

11 Blue Planet ending in July (6)
EARTHY – The name of the planet we live on followed by the last letter (ending) in July.

13 Reliable, though at first out of practice (6)
TRUSTY – The initial letter (at first) of though followed by a five-letter word meaning out of practice.

18 French wine I opened: about average (8)
MEDIOCRE – A five-letter word for a type of French wine includes (opened) the letter I followed by a two-letter word meaning about.

19 Offer from daughter could be right (6)
DANGLE – The abbreviation for daughter followed by what would be described a right if it were 90 degrees.

26 A fancy uniform (5)
ALIKE – The A from the clue followed by a four-letter word meaning fancy or enjoy.

27 The consequence of drinking one tiny beer when squiffy (9)
INEBRIETY – An anagram (when squiffy) of I (one) TINY BEER.

1 Fellow follows London team, first half’s brilliant (7)
FULGENT – A four-letter word for a fellow after (follows) the first half of the name of a London football club whose home ground is Craven Cottage.

3 Slowish piece altogether played with insufficient energy (9)
LARGHETTO – An anagram (played) of ALTOGETHER without one of the letters that is the abbreviation for energy.

4 Close to conflict, trouble to follow (4)
TAIL – The last letter (close to) of conflict followed by a three-letter word meaning trouble.

5 Anybody‘s play? (8)
EVERYMAN – Double definition, the second being the common name of a medieval morality play.

14 Mark where to find the denominator? (9)
UNDERLINE – A description of where the number in a fraction (denominator) is written.

16 Where top class rhubarb dessert is served up? (9)
TRATTORIA – A several (served up) of the abbreviation meaning top-class, a three-letter word meaning rhubarb or rubbish and a four-letter word for a dessert.

17 Tennis champ on the attack – I see the writing on the wall (8)
GRAFFITI – The four-letter surname of a German ladies tennis champion followed by a three-letter word for an attack and the I from the clue.

18 Gas, as Macbeth might have said (7)
METHANE – Split 2,5, this might be how Macbeth would have described himself.

20 French in underground facility take action to restrict access (7)
ENCRYPT – The two-letter word in French meaning in followed by the name of an underground room or facility.

22 Short guy’s revolutionary patent (5)
OVERT – A six-letter mans name without the last letter (short) has all of the letters reversed (revolutionary).