Good morning from South Staffs. My thanks to LetterboxRoy for filling in last week while I was otherwise engaged.

Something of a mixture this morning, with some easy clues to get you started, and others which are more convoluted, and in some cases I’m not convinced that the parsing works properly.

9a           In need of exercise book here? (9)
GYMNASIUM – This clue becomes clearer if you put a comma or question mark after ‘exercise’, making it clear that this is an instruction to reserve a place at the answer if you need exercise.

10a         They often cause bother, being available in two sizes (5)
LOUTS – Two different clothing sizes, placed either side of a word meaning ‘available’, as in ‘her latest novel is — next week’.

11a         Memento queen left in ice for restoring (5)
RELIC – The Latin abbreviation for a queen, followed by an anagram (for restoring) of ICE with Left inserted.

12a         Coppers locate writer in square by church (9)
NINEPENCE – Put together a square number, something to write with, and an abbreviation for ‘church’.

13a         Dog deposited between two men (8)
ALSATIAN – A two-letter name and a three-letter name, placed either side of a word that can mean ‘deposited’, giving a well-known breed of dog. 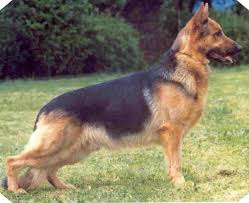 16a         Catnap where wild animals are facing west, standing in all other directions (6)
SNOOZE – Reverse (facing west) a place where a collection of wild animals may be found, then wrap abbreviations for the other three directions around the result.

23a         Down with articles in EU languages (5)
UNDER – Put together examples of indefinite and definite articles in two languages spoken in the EU. The answer, like ‘down’ can mean ‘in a lower position’.

26a         Performed hip-hop in street raising money to offer poor (8,3,4)
STRAPPED FOR CASH – Start with an abbreviation for ‘street’, then add a phrase which could mean ‘performed hip-hop’ (apparently) and ‘in return for money’.

2d           Speaks softly, silence getting endless praise (7)
MUMBLES – Another word for keeping quiet, followed by another word for ‘praise’ minus its last letter (endless).

3d           Documentation for person with extra land? (4,11)
DUAL CITIZENSHIP – Cryptic definition of the status of someone who belongs to more than one country.

6d           One usually starts with nothing — but this represents high earnings! (9,6)
TELEPHONE NUMBER – Cryptic definition of a string of digits usually starting with a zero, which can be used metaphorically to describe a very high earnings figure.

8d           Hotel tosses out person holding a party (7)
HOSTESS – The letter represented by Hotel in the NATO alphabet, followed by an anagram (out) of TOSSES.

16d         Beefy cuts across river and barely runs (7)
STREAKS – Some cuts of beef wrapped round the abbreviation for River, giving us a verb for running ‘barely’.

17d         OAP‘s diamonds stored where East-ender’s weapon is kept (7)
OLDSTER – An East-ender’s gun may be kept in something lacking the initial 24a. Insert the abbreviation for the diamond suit in a pack of cards to get the answer.

20d         Loose stones coming down on church make a horrible noise (7)
SCREECH – An area of loose rock on a hillside, followed by an abbreviation for ‘church’.

21d         Little mischief-maker with remote turned over lottery (6)
RAFFLE – Put together another word for a sprite or fairy and another word for ‘remote’, then reverse the result to get a type of lottery.