Good morning from South Staffs, where we start the day with a light dusting of snow.

It took me a while to get started on today’s puzzle, but once a few checkers were in, things began to flow more smoothly. Thanks to today’s setter, in particular for the anagram at 7d and the lurker at 9d.

8a           Substitutes for team beside opponents (7)
PROXIES – Put together the Latin for ‘for’, the Roman numeral for the number of players in a cricket team, and two compass points representing opponents at the bridge table.

10a         Divided volume of liquid, English wine (9)
QUARTERED – An Imperial measure of liquid, followed by English and a colour of wine.

11a         Backed youth with an expert in court (5)
NADAL – Put together another word for ‘youth’ and AN (from the clue), then reverse the result to get the name of an expert on the tennis court. 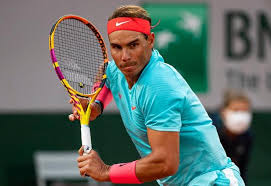 13a         Separated half of dishes, cracked (9)
DISSOLVED – The first half of DIShes, followed by ‘cracked’, as you will have done when you get the answer to this clue.

15a         Stupidly popular, shifty type (about 50) (7)
INEPTLY – Another word for ‘popular’, followed by an anagram (shifty) of TYPE, wrapped round the Roman numeral for fifty.

17a         One makes proposal cancelled by monarch twice (7)
OFFERER – Another word for ‘cancelled’, as in ‘tomorrow’s match is —‘, followed by two instances of the Queen’s regnal cipher.

18a         Caught alien restraining knight and struck (9)
ENTRAPPED – Crosswordland’s favourite film alien, wrapped round the chess notation for a knight, followed by ‘struck (the table with one’s knuckles, perhaps)’.

23a         Biscuit a girl replaced with bad one (9)
GARIBALDI – Anagram (replaced) of A GIRL, BAD, followed by the Roman numeral for one. These are possibly my least favourite biscuit. 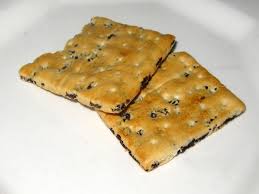 24a         Avoided quiet one in French home to the west (7)
SHUNNED – Put together an instruction to be quiet, the French for ‘one’, and the reverse (to the west) of an animal’s home.

25a         Banks of nowhere returned good gains for savings (4,3)
NEST EGG – Start with the outside letters (banks) of NowherE, then put together Good and a verb meaning ‘gains’ or ‘acquires’, reverse the result (returned) and add it to your starting letters.

1d           Tracks ignored in Derry, poor condition causing this? (10)
DERAILMENT – Here we have an all-in-one clue. The abbreviation for a means of transport which uses tracks is removed from DER(ry), then we add an illness or poor condition. The result is what may happen if the track is in poor condition.

6d           Gambled once Charlie’s gone and cashed in his chips (4)
DIED – Remove the letter represented by Charlie in the NATO alphabet from a word for ‘gambled’ – one involving cubes with numbers on . 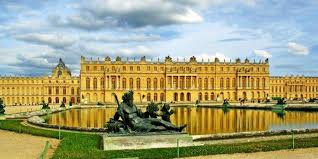 19d         Trouble opening up temple (6)
PAGODA – Put together another word for ‘trouble’ or ‘commotion’, add an opening or space, then reverse the result.

22d         Audibly bemoan making cooking mixture (4)
ROUX – This is a mixture of flour and fat cooked together and used as a base to thicken a sauce. It sounds like (audibly) a word for ‘bemoan’ or ‘regret’. Coincidentally and topically, it is the name of a famous French chef who died this week. 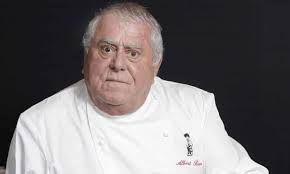