Hello, everyone. The NW corner of today's puzzle exhibits some interesting symmetry, but it doesn't lead anywhere that I can see.  Perhaps, as is so often the case with patterns observed in crosswordland, it's just a coincidence. Other than that it's a standard Tuesday puzzle.  Nothing wrong with that of course.

1a    Mark was first to be amused (7)
TICKLED:  A mark indicating a correct answer with a verb meaning "was first"

10a   Next to a lengthy border (9)
ALONGSIDE:  Follow A from the clue by synonyms of lengthy and border 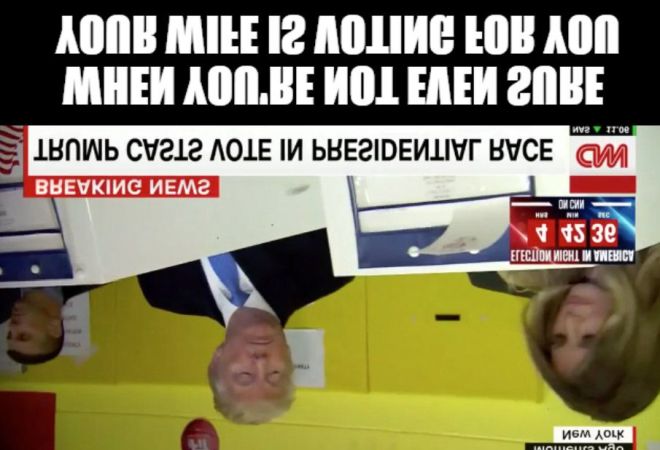 11a   Feeling fast current -- no going back! (10)
EXPRESSION:  Link together a fast train (perhaps), the physics symbol for electrical current, and the reversal (going back) of NO

12a   Heehaw, heehaw, showing indication of delight? (4)
WHEE:  The first two words of the clue are hiding (showing) the answer

14a   Doctor has ointments for shock (12)
ASTONISHMENT:  An anagram (doctor) of HAS OINTMENTS

18a   Emir enters, confused about queen's demands (12)
REQUIREMENTS:  An anagram (confused) of EMIR ENTERS containing (about) an abbreviation for queen

21a   Male help? Female help! (4)
MAID:  The single letter for male with help or assistance

22a   Without thinking, really, chess moves husband's ignored (10)
CARELESSLY:  An anagram (… moves) of REALLY CHESS minus the genealogical abbreviation for husband (husband's ignored)

26a   Perfect view by loch (5)
IDEAL:  A thought or view with the map abbreviation for loch

27a   One supposedly intelligent policeman unkindly rejected short clue (7)
DOLPHIN:  A derogatory (unkindly) word for policeman is reversed (rejected) and followed by all but the last letter (short) of a clue or tip

2d    Conservative politician surrounded by the man's creatures (6)
CHIMPS:  The single letter for Conservative is followed by an abbreviated member of parliament who's been inserted in (surrounded by) a pronoun for "the man's".  Click on the image to see the full Banksy painting 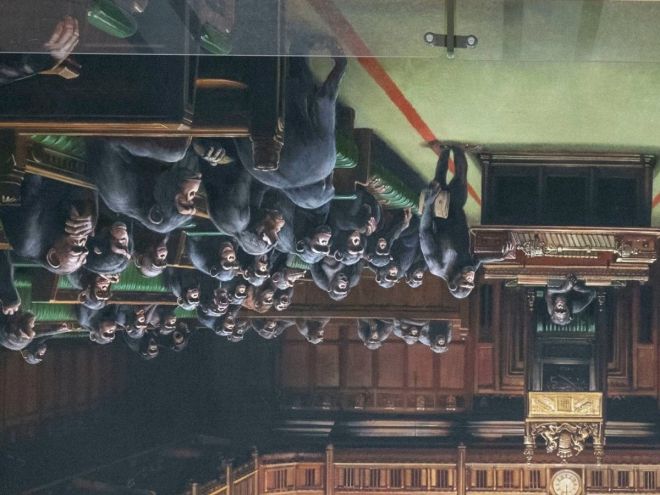 3d    First vessel following the queen's command (10)
LEADERSHIP:  Cement together first or primary, the Latin abbreviation for Queen Elizabeth, and a marine vessel

5d    Reptile picked up monster fish that is squeezing tail in channel (9)
CROCODILE:  Join together the reversal (picked up, in a down clue) of a monster popularised by Tolkien, a common food fish, and the Latin abbreviation for "that is" containing (squeezing) the final letter of (tail in) channeL

6d    Servant mellow under pressure (4)
PAGE:  Mellow or mature comes after (under, in a down clue) the physics symbol for pressure

7d    Be purchasing correct clobber, finally getting smarter (8)
BRIGHTER:  BE containing (purchasing) a synonym of correct is all followed by the final letter (…, finally) of clobbeR

13d   Having a rabbit worried the cat clique (10)
CHATTERING:  An anagram (worried) of THE CAT is followed by a clique or band 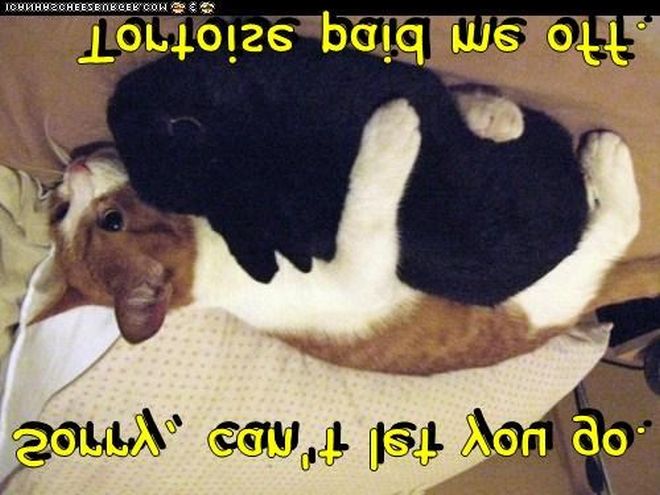 15d   Aida perhaps not about to retain international job (9)
OPERATION:  What Aida defines by example (perhaps) is followed by the reversal (about) of NOT containing (to retain) the single letter for international

17d   Animal gentleman captures right over lake (8)
SQUIRREL:  A country gentleman who contains (captures) the single letter for right is followed by the map abbreviation for lake 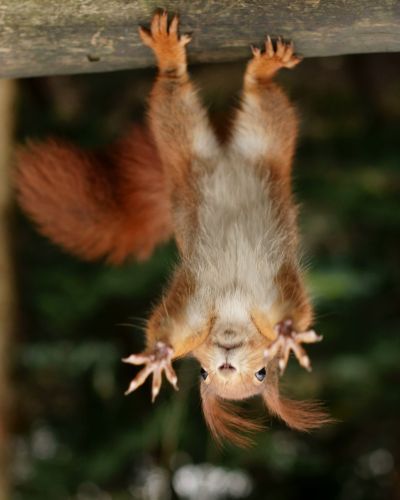 19d   Starts to experience complete terror after snake's appearance (6)
ASPECT:  Initial letters of (starts to) the next three words in the clue come after a venomous snake

20d   During forty winks it's still -- or moving forty times (6)
EYELID:  Cryptic definition of something that’s still if "forty winks" is interpreted informally or moving if the phrase is taken literally

24d   Every seaside place is topless (4)
EACH:  A generic seaside feature minus its first letter (topless)

Thanks to today’s setter for a fun solve. I liked 13d of course, but my favourite today is the clever 9a.  Which clues did you like best?