Good morning from South Staffs as October runs out in damp gloom.

I found today’s puzzle quite tricky, though a good deal of that was down to the length of time it took me to parse 1a.

1a           Rough for friend on team in a police dept (12)
APPROXIMATED – This quite a complicated assembly job. Start with the roman numeral for the number of players in a cricket team. Add another word for ‘friend’. Put the Latin for ‘for’ in front of the result. Finally, wrap A (from the clue) and Police Department round the rest.

12a         Teacher consuming whiskey following everyone failing (8)
DOWNFALL – Put together a university teacher wrapped round the letter represented by Whiskey in the NATO alphabet, Following, and another word for ‘everyone’.

18a         Discussion notes available here (8)
EXCHANGE – Double definition, the second being somehere to get hold of currency notes.

21a         Male with a place excited about university admission (3,5)
MEA CULPA – Anagram (excited) of M(ale) and A PLACE wrapped round University, giving a Latin phrase which is an admission of guilt.

23a         Female animals cross in struggle with partners (6)
VIXENS – Put a cross-shaped letter into a word for ‘struggle, then add some bridge partners.

26a         Bore youngster heading off for bed (5)
TOTED – The definition is the past tense of ‘bear’. Another word for a small child followed by (b)ED with its first letter removed (heading off.

27a         Entering unprotected mine wielding club (9)
INPUTTING – Remove the outside letters (unprotected) from (m)IN(e), then add an action being carried out on a golf green, to get a word for entering data onto a computer.

1d           The highest-rated stadium on earth (7)
AGROUND – This is the sort of ‘on earth’ that a ship doesn’t want to be. We have a single letter which often indicates the highest rating, followed by another word for ‘stadium’ or ‘pitch’.

7d           Stress-free times with beer served up in club (8)
RELAXING – Put together the letter which looks like a multiplication sign (times) and some beer. Reverse the result (served up) and wrap a club or gang around the result.

8d           Street carnival turned camp (6)
STALAG – An abbreviation for STreet, followed by the reverse (turned) of another word for a carnival or celebration, giving a word for a type of camp which was difficult to get out of. 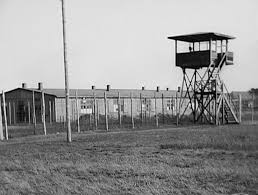 14d         Indecent Frenchman’s one caught with urgency (8)
UNCHASTE – Put together the French for ‘one’, the cricket abbreviation for Caught, and another word for ‘urgency’ or ‘hurry’.

17d         Crossing yard quietly, eating nuts from Africa (8)
EGYPTIAN – Anagram (nuts) of EATING, wrapped round an abbreviation for Yard and the musical symbol for ‘quietly’.

20d         Lowers oneself to take in small objects (7)
DESIGNS – ‘Lowers oneself’ or ‘condescends’ with Small inserted. The ‘objects’ here are plans or aims.