Some quirky clues in today’s puzzle, of the sort where the answer appears to be obvious, but the parsing can take time. My ** marking probably doesn’t give enough for the second part of the exercise.

9a           Malls that could possibly offer double parking? (8,7)
SHOPPING CENTRES – A curious clue. ‘Double parking’ suggests that we are looking for two examples of the letter which indicates a car park. Where are they? Well, the second word of the answer tells us where in the first word they are.

10a         Someone pillaging downs a horseman (5)
RIDER – Remove the A (downs a) from a word for someone doing a spo of pillaging, and you get a horseman.

11a         Italians take this long to eat (9)
SPAGHETTI – Cryptic definition of a staple part of the Italian diet. The rest of us take it long as well, unless we’re eating the variety which comes in tins with tomato sauce. 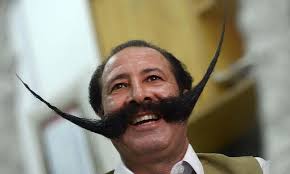 14a         Wishy-washy golf article (5)
THING – Another word for wishy-washy followed by the letter represented by Golf in the NATO alphabet.

16a         Light fixture that helps passengers leaving the plane (9)
PARACHUTE – The passengers here will be airborne troops or skydivers. 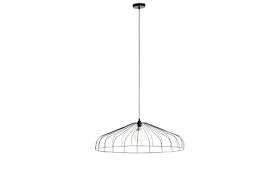 18a         Obstructed southern hideout used by European communist (9)
SNOOKERED – Put together Southern, a hiding place often found with a cranny, European, and the usual colour of Communist.

22a         Capital place where an old serviceman is always looked up to (9,6)
TRAFALGAR SQUARE – Cryptic definition of the place in London where a statue of an old naval hero is placed so that everyone except the pigeons has to look up at it. 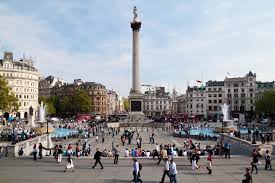 23a         Spooner’s fish gone — work on the net! (7)
PODCAST – Two words (3,4): a fish often eaten with chips; and something gone or over and done with. Apply Dr Spooner’s speech impediment to get a single word for a modern internet activity.

24a         Add cubes, maybe derived from small, insignificant number (7)
SWEETEN – Put together Small, another word for insignificant or small, and a cardinal number, to get what you might do to your tea or coffee.

2d           Obscure bird seen over dock — pie in the sky? (5-6-4)
CLOUD-CUCKOO-LAND – The first word of the answer is a verb meaning ‘obscure’; the second a type of bird; and the third another verb which may describe a ship or aircraft arriving in port.

4d           Serenades perhaps, and kisses with no upset (5)
SONGS – Start with a word for some vigorous kissing, then reverse the ON inside it.

7d           Officer needing loo in speech in US, that would be left here (5,10)
FIRST LIEUTENANT – The first syllable of this junior officer is pronounced differently in American English and UK English, as the clue tells us.

13d         PC at first, young conservative goes into ownership (9)
COPYRIGHT – Put together another word for a PC or policeman, the first letter of Young, and the position on the political spectrum usually associated with conservatism 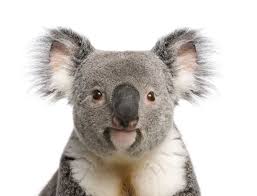 On the subject of regular commenters missing from the scene, has anyone heard from Jean-Luc Cheval recently? He hasn’t posted since mid-August. I emailed him earlier this week but haven’t had a reply. I hope he’s well.