Hello, everyone.  It's Tuesday again and unsurprisingly we have a pretty standard Tuesday puzzle.  No idea who might have set this one.  Any suggestions?

5a    Punched, as criminal might be (6)
CUFFED:  More specifically, as a criminal just arrested might be.  When being photographed with police officers, posing  with your hands behind your back is perhaps not the best idea 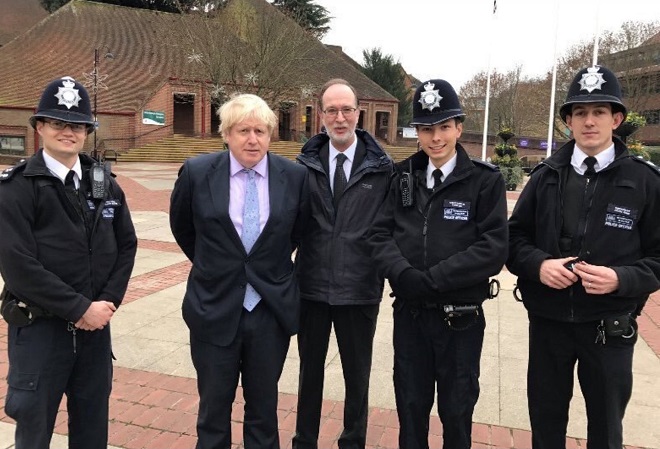 9a    Government intended to dismiss a financial report? (9)
STATEMENT:  A synonym of government is followed by a synonym of intended minus its A from the clue (to dismiss A)

11a   In favour of wearing an item of protective clothing (5)
APRON:  A short word meaning "in favour of" contained in (wearing) AN from the clue 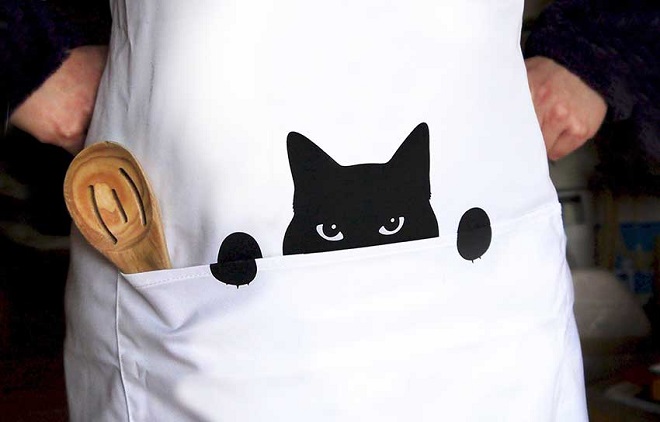 12a   Approximately nothing for a country (6)
CANADA:  Follow the two letter Latin abbreviation for approximately with an informal Americanism meaning nothing 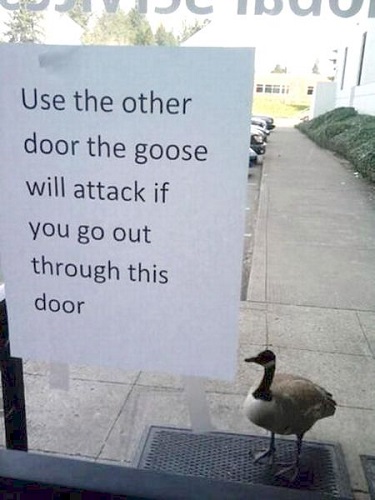 13a   Teapots damaged with hole in -- they could be chipped (8)
POTATOES:  An anagram (damaged) of TEAPOTS containing the round letter (with hole in)

15a   Support PM at once with manic reforms (13)
ACCOMPANIMENT:  An anagram (reforms) of PM AT ONCE MANIC

23a   Race to tee off before work (6)
GALLOP:  To tee off or annoy comes before the usual abbreviated musical work

26a   Head working and working to take over Independent (5)
ONION:  Two copies of a short word meaning working or operating sandwiching (to take over) the single letter for independent.  The 26a is a US publication responsible for leaking this: 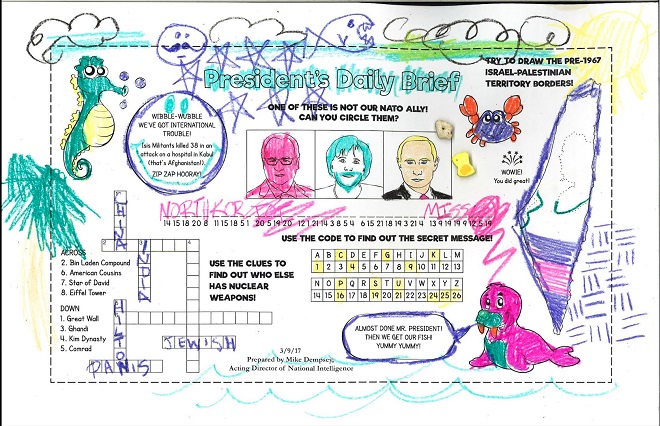 27a   Get rid of characters in hotel -- I'm in a temper (9)
ELIMINATE:  The answer is hiding as some of the characters in the remainder of the clue

1d    One blowing their own trumpet? (8)
MUSICIAN:  The answer is not, for example, a person commenting about how they find all the crosswords easy or boasting about wonderful they are.  No, the answer is literally what a person playing a trumpet defines by example (?) 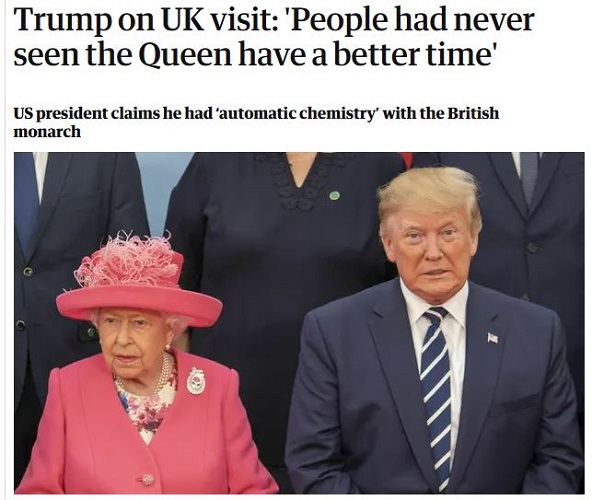 2d    Doctor at home following adult's bleed (5)
DRAIN:  Link together abbreviations for doctor and adult, and follow that with the usual short word meaning at home.  Could have done without being reminded of aneurysms

3d    Delivery at no charge does often matter initially (7)
FREEDOM:  A word meaning "at no charge" is followed by the first letters (… initially) of the next three words in the clue

4d    Flat race possibly unfinished (4)
EVEN:  All but the last letter (unfinished) of what a race defines by example (possibly)

6d    A Parisian welcoming a fight in the dark (7)
UNAWARE:  The grammatical article A in French (Parisian) containing (welcoming) both A from the clue and a synonym of fight

7d    Often got upset about king left behind (9)
FORGOTTEN:  An anagram (upset) of OFTEN GOT containing (about) the Latin abbreviation for king

8d    Is husband following desperate character to get pastry? (6)
DANISH:  IS from the clue and the genealogical abbreviation for husband are both following a Desperate comic strip character 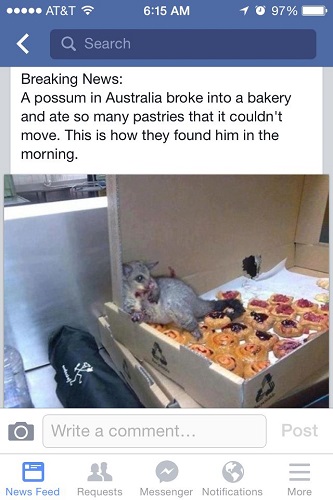 10d   Very hot drink picked up -- I cry out, almost (8)
TROPICAL:  The reversal (picked up, in a down clue) of a fortified wine is followed by I from the clue and all but the last letter (almost) of a synonym of cry out

14d   Horror film includes a good trap? (8)
CARRIAGE:  A horror film based on a Stephen King novel contains (includes) both A from the clue and the abbreviation for good 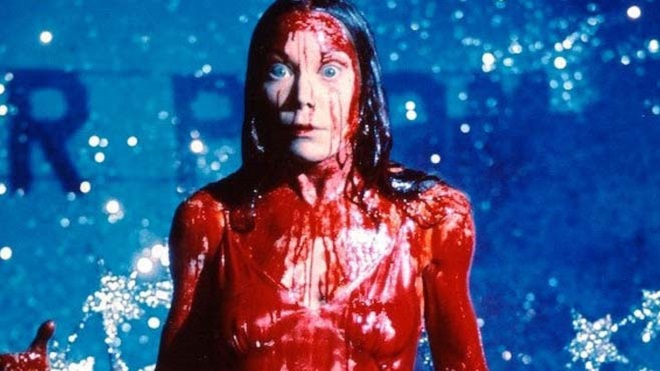 17d   Fast boats caught by ripples at sea (8)
CLIPPERS:  The cricket scoreboard abbreviation for caught with an anagram (at sea) of RIPPLES

19d   Pub in the right to get less stout (7)
THINNER:  Another word for pub is inserted in THE from the clue and the single letter for right stuck on the end

20d   Picture that is about mother on alcohol (7)
IMAGINE:  The Latin abbreviation for "that is" is wrapped about both an informal word for mother and the alcohol known informally as mother's ruin

21d   Integrity from working within specific time (6)
HONOUR:  A familiar short word meaning working or operating is inserted in (within) a unit of time 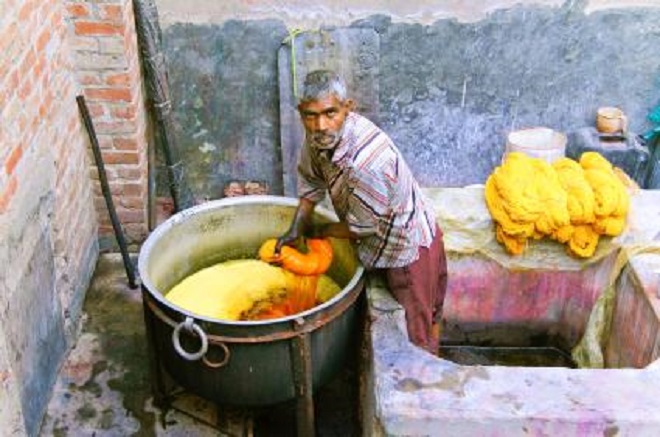 Thanks to today’s setter.  No standout favourites for me this week.  I did not find a lot of opportunities for feline illustrations in this puzzle, but fans of cat pics and entertaining prose might appreciate Kitty's fifteensquared blog on Saturday's Indy puzzle by Gila, which is both fun and more accessible than his Telegraph Toughies.  The puzzle is available for free here.  Just like on BD, it is never too late to comment over there, so feel free to do so if you enjoyed your visit.

The Quick Crossword pun:  INN + TOO + MINES = IN TWO MINDS