Good morning from South Staffs on another sunny day of lockdown.

I found today’s crossword difficult, hence the **** solving time, though looking at the answers, the words used weren’t particularly obscure, so it must have been a wavelength thing. I’ll be interested to see how others got on.

1a           Cultured and calm, holding small cleaning item I flog (12)
COSMOPOLITAN – Start by wrapping another word for ‘calm’ around Small and a tool used for swabbing floors, then add I (from the clue) and another word for ‘flog’ or ‘beat’.

8a           Bans expenses after wife’s accommodated for year (7)
OUTLAWS – Start with another word for ‘expenses’ then replace the Y(ear) with W(ife).

9a           Left-winger rejects first and second parties (7)
SOCIALS – Remove the letters which look like an alphanumeric way of writing ‘first’ from a word for someone with left-wing political views, then add an abbreviation for Second.

12a         Nieces raging about carbon technology (7)
SCIENCE – Anagram (raging) of NIECES, wrapped around the chemical symbol for Carbon.

19a         Boxer with degree? Some might believe it (5)
DOGMA – The type of animal of which a boxer is an example, followed by a higher Arts degree.

23a         Design of new arrow hitting king brought about end of conflict (7)
ARTWORK – anagram (new) of ARROW, followed by the chess notation for a King, and with the last letter (end) of conflicT inserted.

25a         Sadistic alien? (7)
INHUMAN – Double definition, the second being a factual description of someone who does not belong to the people of this planet.

26a         Overlooked university censoring broadcast by journalist (12)
UNRECOGNISED – A single-letter abbreviation for University, followed by an anagram (broadcast) of CENSORING and the usual senior journalist.

3d           One’s clients expect delicacy when just out of bed (6,3)
OYSTER BAR – Cryptic definition of an establishment specialising in marine molluscs which are cultivated in beds.

4d           They dry in spring time in this person’s place (5)
OASTS – Start with a word for a spring found in the desert, then replace the pronoun for ‘this person’ with Time, to get somewhere used for drying hops. 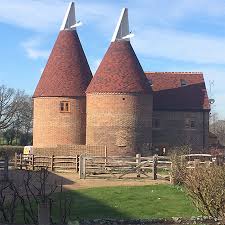 5d           Trading, apart from Devon area, is dying (7)
ITCHING – ‘Dying’ here is an expression of keenness, as in ‘I’m dying to get out of the house’. Remove the letters for the geographical location of Devon from a word for ‘trading’ or ‘exchanging’.

6d           Opposed to street neighbours once more (7)
AGAINST – Another word for ‘once more’ placed next to (neighbours) an abbreviation for STreet.

10d         Stretching one’s legs out? (12)
SLEEPWALKING – Cryptic definition of the activity of moving around while unconscious (out).

15d         Exercises going into speech and action in theatre (9)
OPERATION – Insert the acronym for the physical activities inflicted on schoolchildren in the gym into a formal speech.

17d         Words repeated in four-letter torrent undermining referee (7)
REFRAIN – A short form of ‘referee’ followed by something with four letters which falls from the sky in torrents, giving us the words which may be repeated between verses of a song.

18d         Display uniform to wear after storming Spain (7)
FEATURE – An anagram (storming) of AFTER wrapped round the letter represented by Uniform in the NATO alphabet, followed by the IVR code for Spain.

19d         Watercourses in deserts (7)
DITCHES – Double definition, the first a noun for some man-made watercourses, the second a verb.

20d         Following golf, stayed and tidied up (7)
GROOMED – The letter represented by Golf in the NATO alphabet, followed by ‘stayed’ or ‘lodged’.