Good morning from South Staffs this All Saints Day, a grey and drizzly one.

I took a little while to get started on today’s Giovanni, but things then began to fall into place and there was a steady solve.

1a           Super present from creepy pupil in New York (3,5)
BIG APPLE – Another word for ‘super’ and a traditional present for teacher give us the name familiarly applied to New York.

9a           Disgraceful riot soon breaking out — university steps in (9)
NOTORIOUS – Anagram (breaking out) of RIOT SOON with University inserted.

11a         Leading quartet of Cavaliers missing in rolls (5)
LISTS – Remove the first four letters from another word for the Cavaliers in the English Civil War.

12a         Sleep needed by relations — some linen must be provided (6)
NAPKIN – A short sleep followed by a generic word for your relations.

13a         Wonderful king embraced by chum gets to soften up (8)
MACERATE – Put together another word for ‘wonderful’ and the Latin abbreviation for king, then wrap another word for a chu, or pal around the result.

15a         Player on bench that’s got diminished is farmed out elsewhere (13)
SUBCONTRACTED – The short form of the word for a player in a sports team who is not one the starting line-up, followed by ‘diminished’ or ‘reduced’.

22a         Like teacher, editor and social worker featured in illustration (8)
PEDANTIC – Put together an abbreviation for ‘editor’ and one of the usual social insects, then wrap a shortened word for an illustration around the result.

23a         Water flowing in street in the morning — engineers brought in (6)
STREAM – Abbreviations for ‘street’ and ‘in the morning’, placed either side of the initials of a regiment of engineers.

26a         Old Roman spies given new name under cover (5)
CINNA – The acronym for the US spy agency wrapped around New Name. The result is one of the conspirators who assassinate Julius Caesar in Shakespeare’s play, or his namesake, a poet who is set upon by mistake by the vengeful mob. When he protests that he is a poet, not a conspirator, they kill him for writing bad verse.

27a         Wacky quality of sentimentality combined with shortage of subtlety (9)
GOOFINESS – A three-letter word for sticky sentimentality, followed by a word for ‘subtlety’ missing its last letter.

28a         Fruit in cold drink son removed (6)
CHERRY – Cold followed by a fortified wine minus the abbreviation for Son.

29a         One who changes sides, finding fault with common soldiers (8)
DEFECTOR – A fault in manufacture, followed by the usual soldiers who are not officers.

3d           One about to enter Iberian FC entrance (7)
PORTICO – The Roman numeral for one and the Latin abbreviation for ‘about’ or ‘approximately’ are inserted into the name of a Portuguese football team. 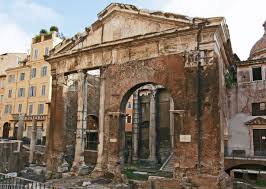 4d           This could be Anita the writer, ladies and gentlemen! (4)
LOOS – This familiar word for rooms found with ‘Ladies’ or ‘Gentlemen’ written on the door is also the surname of a writer.

10d         Quiet and initially wild like a sorcerer? (8)
SHAMANIC – Put together an instruction to be quiet, the first letter (initially) of And, and a word for ‘wild’ or ‘extremely busy’.

14d         Splendid Scottish university, one taken over by English (8)
STERLING – Start with a Scottish university city near the site of the battle of Bannockburn, then replace the first instance of a Roman numeral for one with English.

16d         Party offering drinks facility? Then get canned, drunk! (4,5)
BARN DANCE – Somewhere to be served a drink followed by an anagram (drunk) of CANNED.

19d         Form of entertainment that’s loud and dishonest (7)
FUNFAIR – The musical symbol for ‘loud’ followed by ‘dishonest’ or ‘unjust’.

20d         Emergency set-up, product that sells quickly (7)
HOTLINE – Originally a top-level communication system between the leaders of the USA and USSR during the Cold War, this could be split (3,4) into a word which can mean ‘most wanted’ and a word for a product or range of products.

21d         Drug I accept will work, getting rid of torment finally (6)
IPECAC – Anagram (will work) of I ACCEP(t) after removing the final letter of tormenT.

24d         Woman associated with garden books as part of festival (5)
EVENT – The woman who lived in the Garden of Eden, and the abbreviation for the books in the second part of the work in which she appears.