Hello everyone.  I found today's puzzle tricky, in part because it required some general knowledge that I didn't have stored away.  If you're looking for another crosswording challenge, there's always this week's Not the Saturday Prize Puzzle.  The setter (me) would appreciate feedback on it.  Comments so far suggest it's probably a 4* puzzle, but there's a nice review by Prolixic to provide hints if you get stuck.

Thanks to everyone who filled out my survey on last week's puzzle.  The results and a selection of the comments are available after the hints.

In the hints below most indicators are italicized, and underlining identifies precise definitions and cryptic definitions.  Clicking on the boo! buttons will reveal the answers.  In some hints hyperlinks provide additional explanation or background.  Clicking on a picture will enlarge it or display a bonus illustration.  Please leave a comment telling us how you got on.

1a    Honest claim about bandit? (4,7)
SLOT MACHINE:  An anagram (about) of HONEST CLAIM gives a 'bandit' who's found in all the major dictionaries as part of a phrase beginning 'one-armed'

9a    Leaderless miners confused with pros and cons (9)
PRISONERS:  An anagram (confused) of [m]INERS PROS, with leaderless indicating deletion of the first letter of miners

13a   Some visit Argentina, returning for free (6)
GRATIS:  The answer is found hiding as some of the reversal (returning) of the remainder of the clue 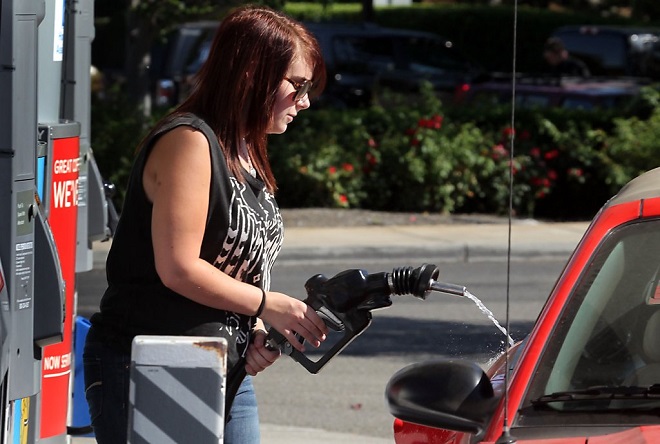 19a   One in five love a superfood (6)
QUINOA:  Put together an informal word for one item from a set of five (babies, perhaps), the letter that looks like a love score in tennis, and A from the clue.  Are there any superfoods that actually taste good?

21a   Famous swimmer crosses river going to 'The Queen' for drink (8)
SPRITZER:  An American swimmer famous for winning seven gold medals at the 1972 Olympics containing (crossing) the map abbreviation for river is followed by the usual Latin abbreviation for the Queen

23a   Traitorous person with support for the arts? (6)
WEASEL:  Stick together the single letter abbreviation for 'with' and a support used by an artist 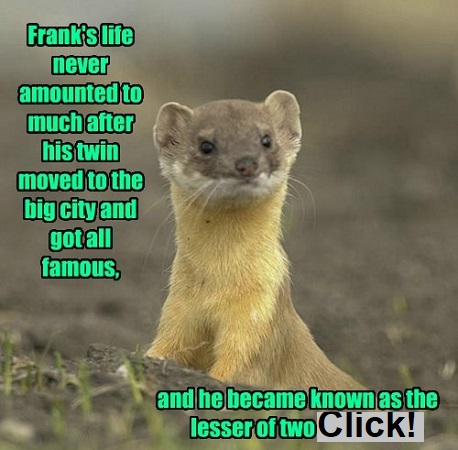 27a   On  hand (9)
OPERATIVE:  A double definition.  On or running, and a hand or worker with special skills

1d    Little box? (7)
SAPLING:  A cryptic definition.  Box here refers not to a container but to a type of tree

2d    Topless broadcasting is due (5)
OWING:  A synonym of broadcasting (seeds, perhaps) minus its first letter (topless)

3d    Still produce  nonsense (9)
MOONSHINE:  A double definition.  The liquid produced by a still is also another word for nonsense

5d    Extremely cool suit (2,6)
IN SPADES:  A usual word for cool or fashionable with a playing card suit

6d    Pass a law bringing woman to court (5)
ENACT:  A woman's name currently popular in crosswordland is followed by the two-letter abbreviation for court

7d    Struggle to get a grip? (7)
WRESTLE:  A cryptic definition.  The struggle involves getting a grip on an opponent.  It takes place on a mat.

8d    Force detailed bugging US statesman (8)
FRANKLIN:  The physics symbol for force with all but the last letter (de-tailed …) of bugging or irritating

14d   Article involved rioter at the front (8)
ANTERIOR:  Cement together a grammatical article and an anagram (involved) of RIOTER

16d   Former drivers meeting worker could be lively (9)
EXUBERANT:  Stitch together the usual short word for former, a company that connects freelance drivers with passengers, and the usual worker insect 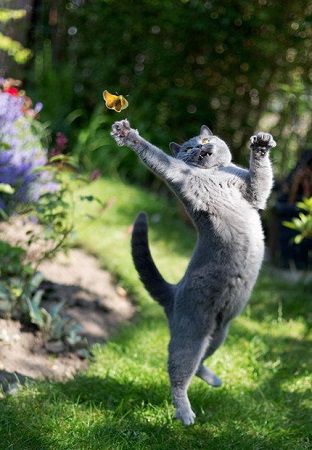 17d   Country's former leader wearing nothing? On the contrary! (8)
CAMEROON:  On the contrary instructs us to reverse the wordplay, so we want the letter that looks like zero or nothing contained in (wearing) a former leader of the UK who famously once forgot his daughter when leaving a pub 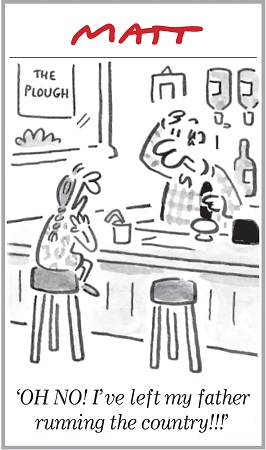 22d   Head in charge of subject (5)
TOPIC:  Follow head or summit with the abbreviation for 'in charge'

24d   Nick cleans top to bottom? The opposite (5)
SWIPE:  The opposite tells that a synonym of cleans has its last (bottom) letter moved to the start (top)

Thanks to today’s setter.  My favourite clue was 3d.  Which clues did you like best?

Click on the expandable spoiler boxes to see the results of each question in the survey.  The questions refer to last Tuesday's puzzle DT 29134, which I rated as less difficult than the Tuesday average.  Clicking on a graph will enlarge it.

1. What aids, if any, did you use when filling the grid on this puzzle?

45% of respondents used aids to fill the grid 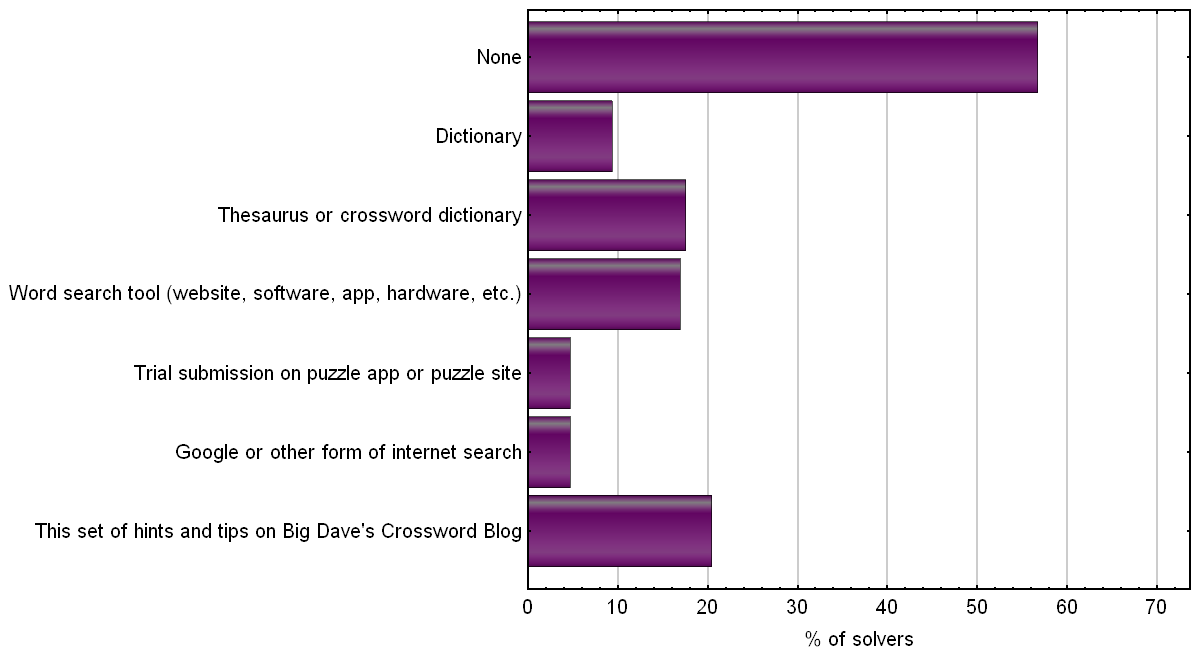 [collapse]
2. What aids, if any, did you use when parsing the answers in this puzzle?

30% of respondents used aids to parse the clues

[collapse]
3. How long did you spend solving this puzzle? 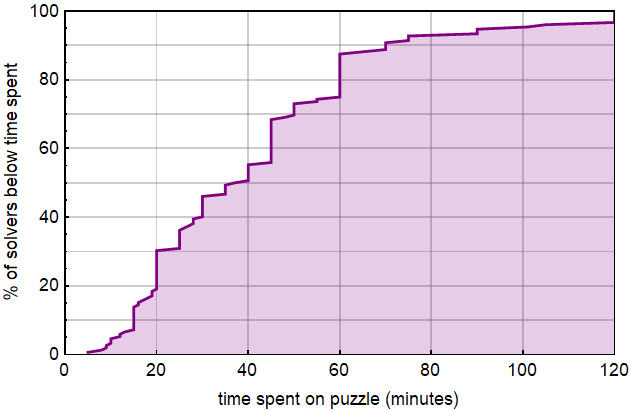 [collapse]
4. What difficulty rating do you feel would be appropriate for this puzzle?

Most solvers agreed with my difficulty rating of 2* 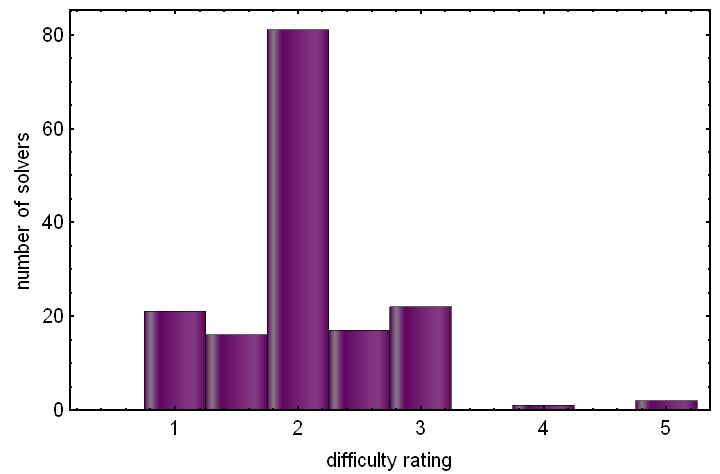 [collapse]
5. What is the maximum solving time associated with your personal 1* difficulty rating?

Commenters' 1* solving times stretch from a few minutes to over an hour.  This graph shows the cumulative distribution of the responses. 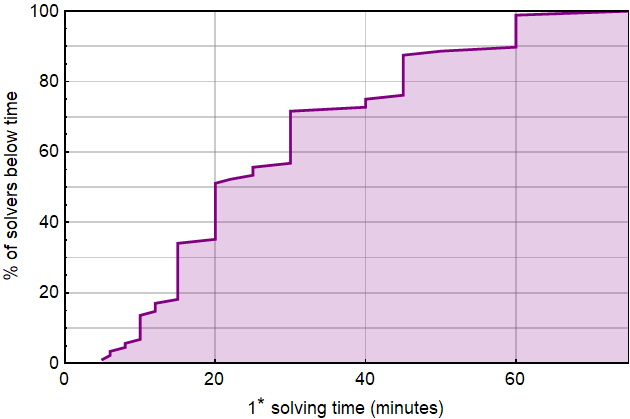 Most of the responses were provided by lurkers, with only 19% of responses coming from readers who comment at least once a week.

[collapse]
7. Comments about the topics covered by this survey

I read and appreciated all of the comments.  Most of them fell into two categories:

1.  Reactions to the way in which the puzzles are described by some commenters (who I am sure do not intend to cause these responses in their fellow solvers):

2.  Appreciation for the site:

Thanks again to everyone who responded to the survey.  I hope that you find the results interesting.