Welcome.  It’s been a while since we’ve had a Toughie from our editor, and this is a most welcome return indeed.  I found it rather Toughier than I was expecting, and will be interested to see how you found it. 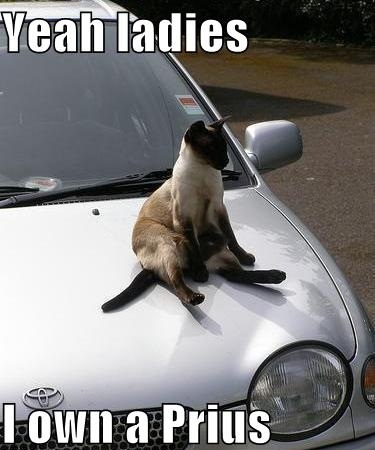 buttons.  The exclamation mark is not an imperative -- click only if you wish to reveal all.

1a    Indication of vaping in part of garden? (5,6)
CRAZY PAVING:  Ooh, an inverted clue to start us off.  The answer, a possible garden feature, is a cryptic clue for (indication of) “vaping”: an anagram indicator followed by an anagram of VAPING 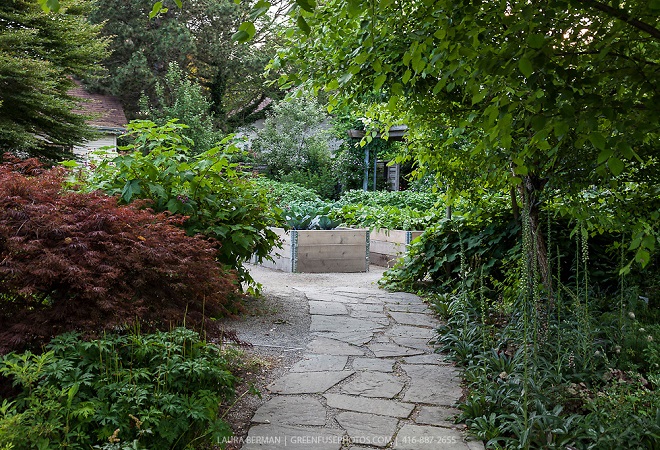 9a    Swimmer in port alone (5,4)
DOVER SOLE:  A charade of an English port and another word for alone 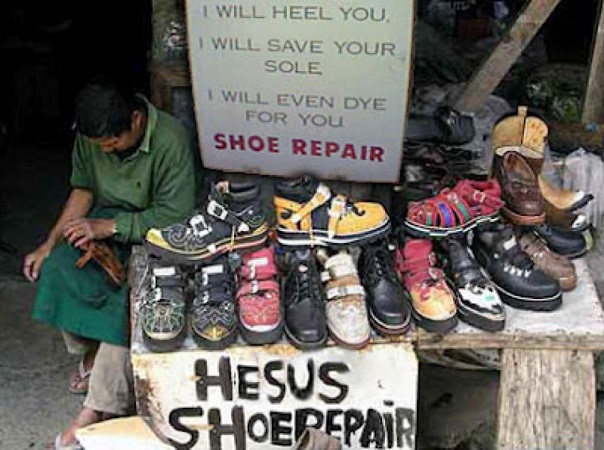 11a   Shout that hurts juvenile (6)
CALLOW:  Put together a yell and an expression of pain

12a   Record heartless material for one of Paul's pen pals (8)
EPHESIAN:  Two letters which stand for a type of record, then a coarse fabric without its middle letter (heartless)

13a   Note something sticky in blockage (3,3)
LOG JAM:  A note or record of events and a sticky conserve 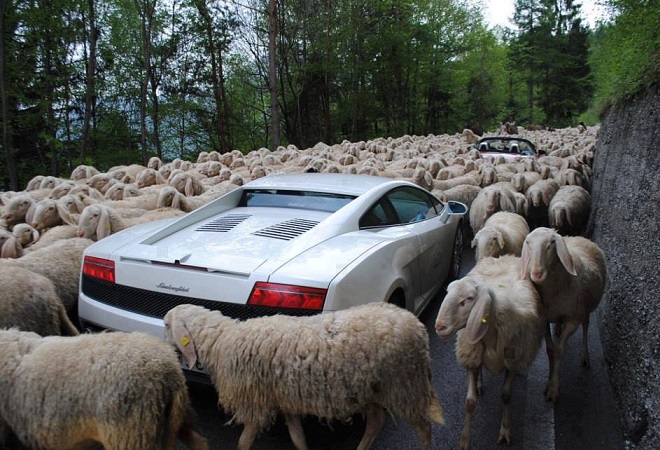 15a   Mike with bogey at first in golf course facing east? Blow it! (8)
TROMBONE:  The thing we’re instructed to blow is a brass instrument.  We need to insert the letter denoted by Mike in the NATO alphabet and the first letter of bogey (bogey at first) in a Scottish golf course.  This is all followed by (facing) E(ast)

18a   Freeloader about to fall under executioner maybe (6-2)
HANGER-ON:  One who may be inflicting death by the noose, and then a two-letter preposition meaning about or concerning.  The about would be under the executioner in a down answer, but this an across clue so I’m not convinced I have this right

19a   Nick eco-friendly car, not posh, working (6)
PRISON:  A make of hybrid car without the letter that can denote posh, then working (2) 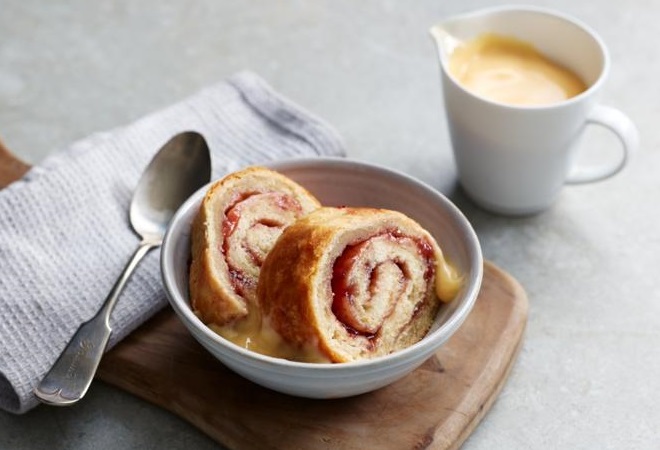 23a   Sunbeam possibly beginning to trouble student in flying boat (6)
TALBOT:  The first letter of (beginning to) trouble followed by the abbreviation for learner inside an anagram (flying) of BOAT.  I had to look up the only plausible possibility to understand what it had to do with sunbeams

26a   Nice at first to wear ancient clothing somewhere friendly (5)
TONGA:  The initial letter (… at first) of Nice goes inside (to wear) the outer garment of an ancient Roman citizen.  The Friendly Islands

27a   Safe blown in explosion? That's dangerous (9)
WOLFSBANE:  An anagram (… in explosion) of SAFE BLOWN

28a   More men wept about being given responsibility (11)
EMPOWERMENT:  An anagram (… about) of MORE MEN WEPT

1d    Something fishy and not quite legal about supplement (7)
CODICIL:  A fish (which would certainly be fishy!) and most of (not quite) a word meaning legal, reversed (about).  A supplement to a will 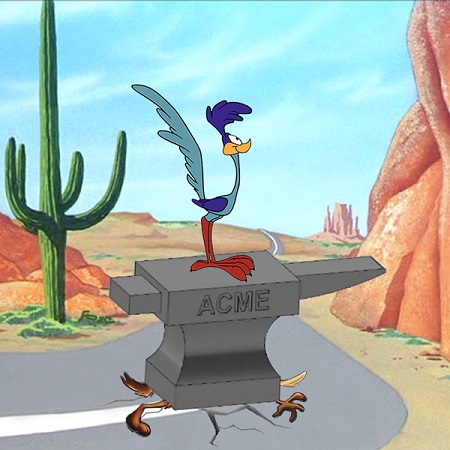 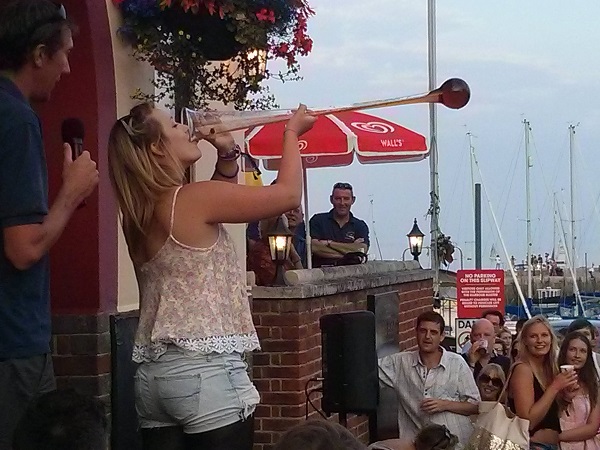 4d    Soon  unknown (4)
ANON:  Two definitions; in the second case the answer is an abbreviation for a word meaning without a name

5d    Windows once seen in entire building? That's amateur (8)
INEXPERT:  An old Windows operating system is seen in an anagram (… building) of ENTIRE

6d    Cast seen with this actor could be Bengalese (5)
GABLE:  An anagram (cast) of SEEN with the answer could be BENGALESE.  Which means that the actor we are looking for is an anagram of BEGAL

8d    Mask Home Counties uprising -- spotted, they might fall (8)
DOMINOES:  A mask covering the upper half of the face, then the home counties area of the country written upwards (uprising, in a down clue)

14d   Drink gallons where smashed member might be (3,5)
GIN SLING:  An abbreviation for gallons, plus where a broken limb might be (2,5)

16d   Germans cooked the Queen's goose (9)
MERGANSER:  GERMANS anagrammed (cooked) followed by two letters which stand for our queen.  Is it a duck?  Is it a goose?  I don’t know, but it looks cute 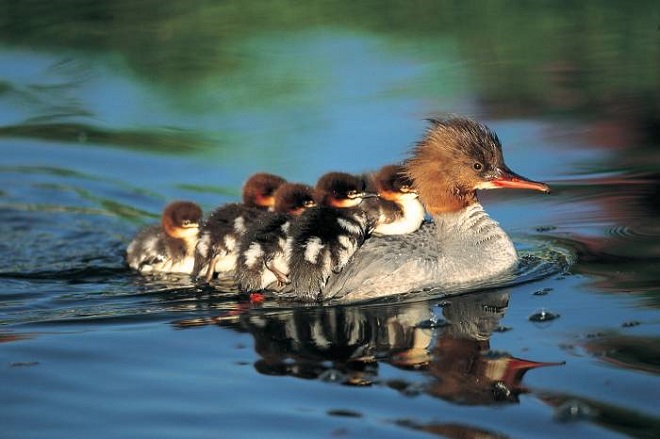 17d   Almost achieve backing to pen old Western sequel (6-2)
FOLLOW-UP:  Most of a (4,3) phrase meaning to carry through successfully, reversed (backing), and containing (to pen) abbreviations for old and for Western

18d   Naval man in house share that's curtailed (7)
HORATIO:  An abbreviation for house plus a share or allowance without its last letter (that’s curtailed)

20d   Want to move? Set out to find lender (7)
NATWEST:  Successive anagrams of WANT (to move) and SET (out) give us a high street bank

24d   What might cut  a dashing figure? (5)
BLADE:  Two definitions, the second archaic

25d   Spot fine -- something legal? (4)
FLAW:  The abbreviation for fine followed by what legal stuff is concerned with

These hints and tips are for anyone who might find them of use.  The asides and illustrations are to add a personal perspective and some colour.  The comments section is for everyone.  Please do ask if you need anything clarified, have any suggestions as to how the blogs could be improved, or have anything else you’d like to say.