Good morning from Sheriff Hutton in North Yorkshire, where we’re visiting family, and a cold and frosty morning it is.

The usual Friday fare from Giovanni, with well constructed clues leading to the answer even if it is a slightly uncommon word. 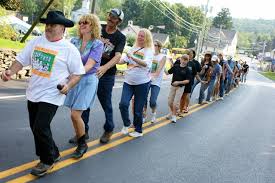 11a         Winds disturbing isle after festival (10)
EASTERLIES – A major Christian festival followed by an anagram (disturbing) of ISLE.

18a         Minister of religion I squashed, one admitted for holy promotion! (12)
CANONISATION – Put together a minister of religion (one found in a cathedral chapter), I (from the clue), and a phrase (3,2) for ‘squashed’ wrapped around the Roman numeral for one. The result is the formal process of declaring someone to be a saint.

22a         Piercing action of tool, ace for penetrating (10)
IMPALEMENT – The abbreviation found in the corner of an ace in a pack of cards, inserted into another word for ‘tool’.

25a         Big man about fifty tackled by rival who looks out for trouble? (9)
VIGILANTE – A Russian doll type of clue. A verb meaning ‘rival’ or ‘contend’. Wrapped around a very big man, wrapped around the Roman numeral for fifty.

28a         Daughter always to slip up making brief excursion (3,4)
DAY TRIP – Put together an abbreviation for Daughter, a poetic word for ‘always’ and another word for ‘slip up’.

1d           Baddie hugging revolutionary 5 Across (6)
CACHED – A heel or rotter wrapped around the usual crossword revolutionary, giving us another way of expressing the answer to 5 Across.

2d           Maybe fine joke is rubbish ultimately (6)
PUNISH – Put together the sort of joke which relies on a play on words, IS (from the clue) and the last letter (ultimately) of rubbisH.

3d           Talk with girl, French mistress (10)
CHATELAINE – An informal talk followed  by a girl’s name produces the mistress of a castle in France.

4d           End of flight has upset parrot in mountainous region (5)
TYROL – The last letter of flighT followed by the reverse (upset) of a type of parrot, giving us some mountains in Austria.

5d           Trendy English member meeting worker becomes crude (9)
INELEGANT – Put together another word for ‘trendy’, English, one of the members of the body, and one of the usual insect workers.

7d           Boat launched with bosses in attendance? (8)
OUTBOARD – ‘Launched’, as in ‘my new book is —‘, followed by the collective noun for the directors of a company, giving us a type of boat named for its method of propulsion.

15d         Old city chap wearing gold stars (4,5)
URSA MINOR – Put together the Old Testament city in the Chaldees, a chap’s name (perhaps your Uncle in the USA), ‘wearing’ and the heraldic term for ‘gold’. 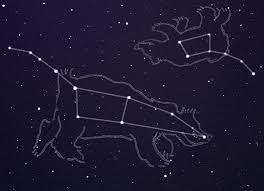 16d         Bill given greeting, always someone deemed a success (8)
ACHIEVER – Put together an abbreviation for a bill or account, a two-letter greeting, and another word for always.

17d         Like circle and rings expected to meet requirements? (2,6)
ON TARGET – Where the circle or rings which an archer or shooter aims at may be found.

23d         Change the last word, last bit of record (5)
AMEND – The final word of a Christian prayer followed by the last letter of recorD.

24d         Part of the theatrical scenery in residence (4)
FLAT – Double definition, the second being a residence in an apartment block.