Hints and tips by Gryphon

Hello!  Today’s hints are brought to you by a legendary beast known for guarding treasure and priceless possessions.

This Toughie by Dada guards its secrets a little more closely than do some of the crosswords we have on Tuesdays, but there are some gems to be found for those who dare.

In the clues below, definitions are underlined and indicators are in italics.  The answers can be found under the no answer buttons (except that one — there’s no answer under there).

1a    Where ‘RIP the compiler’ shall be writ, never! (4,2,4,4)
OVER MY DEAD BODY:  Our setter gets us on side from the outset by giving us a slice of humour to savour.  This phrase, which could stand in place of the expostulation at the end of the clue, may also cryptically refer to the location of the words shown in quotation marks in the event of the setter’s demise.  Also what the lady below used to say whenever asked for a special recipe: 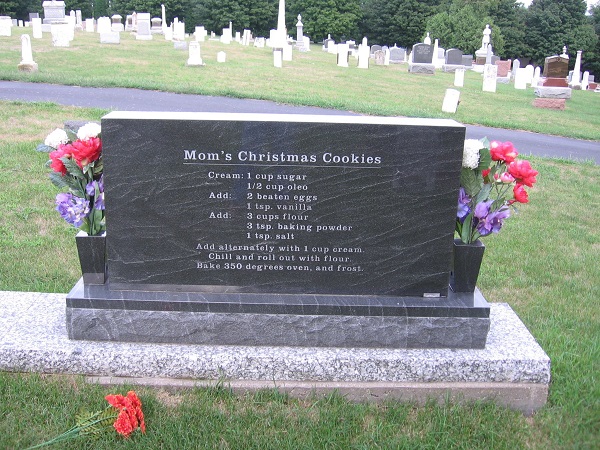 9a    Something funny, perhaps, left in stew (3,4)
TAG LINE:  This is a watchword or slogan, or the last few words of a joke which will hopefully have an audience in stitches.  The usual abbreviation of left is inserted into a stew associated with North African cuisine

10a   Movement of current part inspired, I think, on reflection (4,3)
TIDE RIP:  A lurker concealed in part of the clue in reverse (on reflection).  This current, potentially lethal for those who encounter it, is only familiar to me with the words of the answer interchanged

12a   Hymn — piece stealing heart in Bangkok, if one Siamese, say? (10)
MAGNIFICAT:  Wrap a chess piece around the middle letter of (heart in) Bangkok and follow it with IF from the clue and the Roman numeral for one.  Finish with the creature of which the reputedly aloof feline in the clue is an example (Siamese, say?).  A song of praise should appear as a result

14a   Grand, a dish of cold vegetables cut for curry paste (6)
MASALA:  The Roman numeral for 1000 (grand in the monetary sense) precedes A (from the clue) and a selection of cold vegetables minus the last letter (cut) to produce a mix of ground spices which may be used in the making of a curry

15a   Stab from behind in openly criminal study of felonies (8)
PENOLOGY:  The reversal (from behind) of a 2-letter word for a stab or attempt is inserted into an anagram (criminal) of OPENLY to leave us with a field of study which I may have heard of previously but needed to check in the BRB

17a   Dancing on air, old stud (8)
DOORNAIL:  This stud has a wide head and is used in the construction and decoration of wooden doors.  It is an anagram (dancing) of the second, third and fourth words in the clue 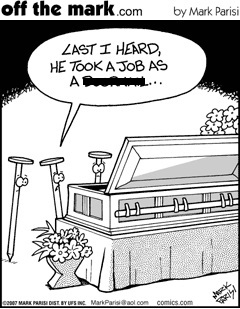 18a   Maximum number covered by hospital (6)
HEIGHT:  Think of a number between one and ten and place the common abbreviation for hospital in front of it.  This should produce a word for maximum that may be used in a phrase such as ‘that’s the ****** of it’

21a   Movement of hip on bandaging little bone — items for suturing might be seen here (10)
PINCUSHION:  Another clue requiring some building blocks.  Start with an anagram (movement) of hip and end with the ON from the clue.  These are surrounding (bandaging) a small anvil-shaped bone found in the middle ear and hence reveal an item often used by a seamstress to store the tools of her trade which she uses to hold together work in progress prior to stitching 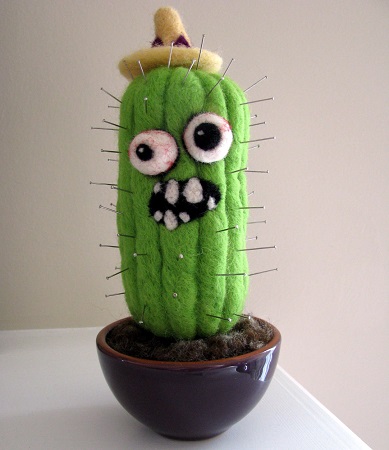 22a   Foe not taking sides in prayer? (4)
ANTI:  A person in opposition is produced by removing the first and last letters (not taking sides) of an insect (shown below, having taken an unusual pew) whose familiar posture is likened to that of one praying 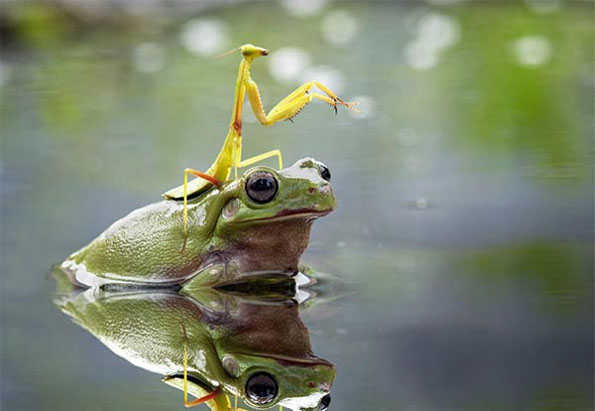 24a   Smart being gripped by a good book? On the contrary, losing the plot (7)
CHAOTIC:  The A from the clue and some biblical books (usually clued in the plural, but they could be in a single volume) are held (gripped) by a synonym of smart as used in the world of fashion.  This combination should result in a description of a situation that could be referred to as ‘losing the plot’

25a   One may be in charge of reaching (7)
ANAGRAM:  This wordplay device will transform ‘in charge’ into ‘reaching.’  You do occasionally see standalone definitions by example, as here, but it made my tail twitch 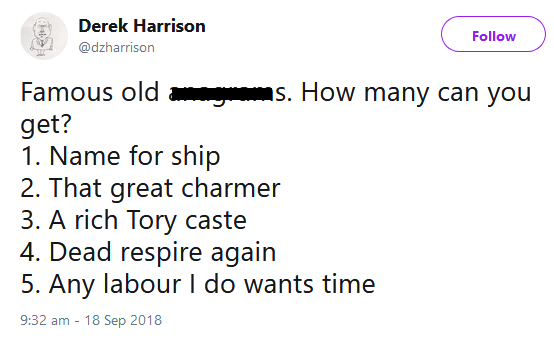 26a   Fashion design safe, criticise company slowing down after recession (5,3,6)
PETER PAN COLLAR:  Another visit to the world of fashion.  This time we are seeking an item which formed part of a costume designed by John White Alexander and his wife in collaboration with Maude Adams for the latter’s starring role in a famous 1905 theatre production.  Begin with crosswordland’s favourite safe and add a synonym for criticise plus an abbreviation for company.  Complete the job with the reversal (after recession) of an abbreviated musical term meaning slowing down 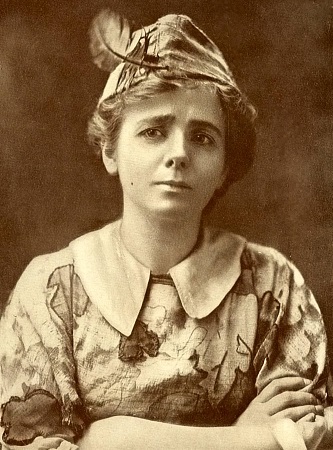 1d    I’m top? That’s wrong — I’m not sure top (7)
OPTIMUM:  Can’t pretend that I was overly enamoured with the surface read of this one but the gist of it is that we need to make an anagram (that’s wrong) of the words that precede the question mark and follow that with a hesitation device.  Top in the sense of best or ideal

2d    Encourage and kiss people in juvenile competition (3,3,5,4)
EGG AND SPOON RACE:  More construction work.  This time take a synonym for encourage plus AND directly from the clue then an old-fashioned 5-letter word which could mean kiss, and finally a large bunch of people.  With luck, you then have a sporting contest often incorporated into a Junior School Sports Day — one that generally causes fewer cuts and bruises than its counterpart which involves sacks!

3d    Miss scored, reportedly? (4)
MAID:  A straightforward homophone of a term describing an unmarried girl or lady which could be heard as (reportedly) a word meaning scored or gained

4d    River bird, one on the radio perhaps? (6)
DEEJAY:  The colourful woodland bird shown below is appended to what is possibly the most widely mentioned river in UK crosswords.  The whole will reintroduce a music presenter who put in another DT appearance very recently 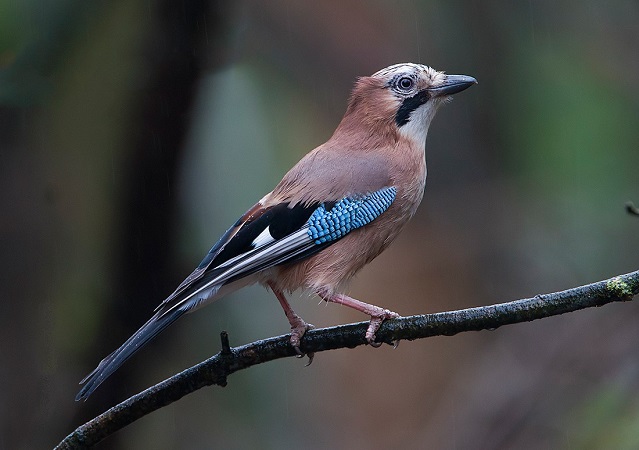 5d    One’s present at present (8)
ATTENDER:  One who is present.  AT from the clue followed by a verb to present, offer or bid

6d    Comfortable position with bloomers full of thorns? (3,2,5)
BED OF ROSES:  We are seeking a commonly used expression which, when one comes to think about it, has to be a contradiction in terms!  A group of these thorn-bearing bloomers when planted in a garden are accepted as being synonymous with a ‘comfortable position’ in life 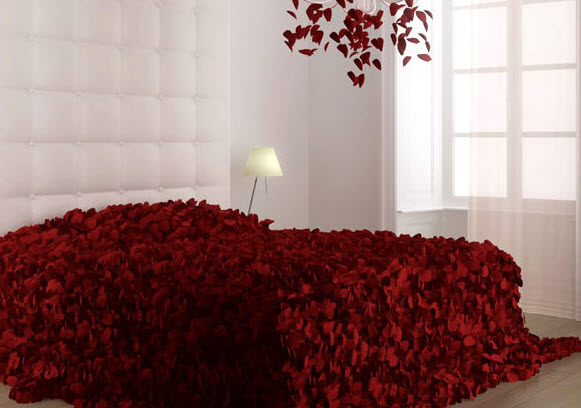 7d    Dodgy ear — regret cold in head (8-7)
DIRECTOR-GENERAL:  Anagram alert, heralded by ‘dodgy’.  On this occasion, reconfigure the second to fifth words in the clue to unveil the type of head of which Tony Hall is a current example

8d    Mole exaggerated punctures with acne, say? (6)
SPOTTY:  A 3-letter acronym meaning ‘exaggerated’ goes inside (punctures) a mole of the snoopy human variety.  Another surface read that got the thumbs down here 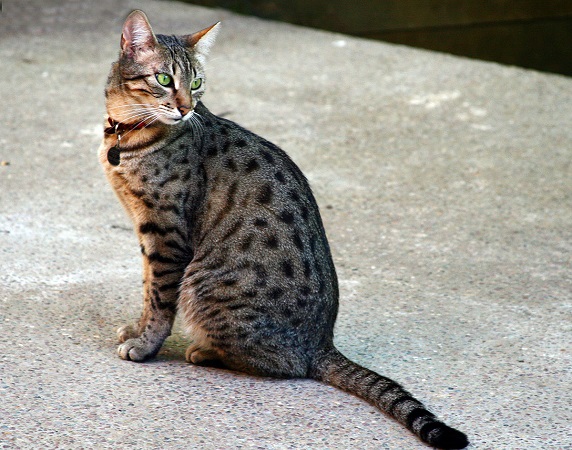 13d   Fifty tucking into feast, ten almost finished French stew (10)
BLANQUETTE:  The Roman numeral for fifty is inside (tucking into) a sumptuous feast.  We finish off with most of (almost finished) the number TE(n) to give a type of French ragout

16d   Before bedtime, a short agreement drawn up after close (8)
NIGHTCAP:  A drink imbibed before bedtime comprises a synonym of close or near to followed by a reversal (drawn up, in a down clue) of a 4-letter word for an agreement.  A deftly camouflaged definition!

17d   Case of dramatist screening very long show (6)
DEPICT:  The first and last letters of (case of) dramatist concealing (screening) a term relating to a lengthy book, film etc. to result in a verb pertaining to ‘show’

19d   One cutting down to size a couple of males held by judge? (7)
TRIMMER:  A person or piece of equipment that may reduce almost anything to the required measurements.  This particular one involves a ‘judge’ who has arrested (held) a couple of blokes 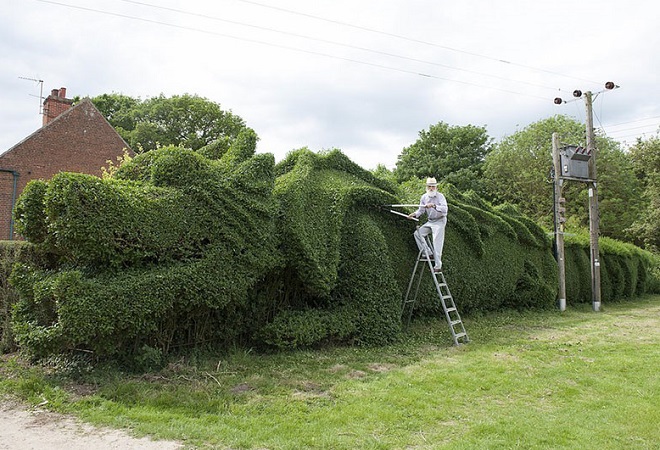 20d   Land in effect over sea (6)
DOMAIN:  A 2-letter word for effect or accomplish comes before (over, in a down clue) a frequently encountered alternative name for the briny to reveal a territory or area

23d   Big fish all right in the morning after getting up (4)
MAKO:  This shark needed checking in the BRB but was easily assembled from the clue.  Another of our setter’s favoured  reversals — this time comprising the two letters that can stand for ‘all right’ and another two that refer to any time before noon 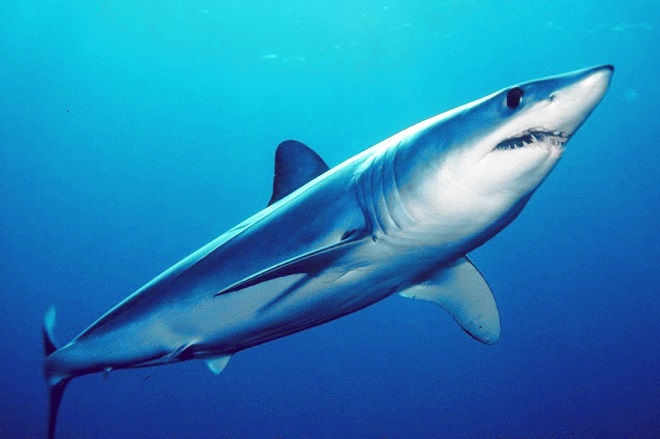 Thanks to Dada.  Favourites here were 1a, 11a and 6d for the smiles they elicited.  Which tickled your funny bone?