Hello, everyone.  This is one of those puzzles where untangling the wordplay in a few of the clues requires concentration.  Which is just the kind of puzzle that I enjoy.  I hope that you also found it entertaining.

Last Tuesday our 2Kiwis noted that three-letter answers featured in both the regular cryptic and Toughie puzzles and pointed out that was surprising because it feels like we don't see them very often.  I've now had time to collate the relevant data.  Here is the distribution of answer lengths over the last 16 years of Daily Telegraph Cryptics.  Three-letter answers make up less than 1% of all answers, which makes them about as uncommon as those with the maximum 15 letters.  As usual, you can click on the graph to enlarge it. 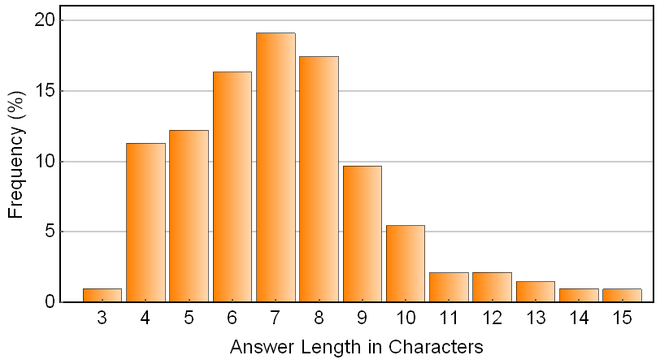 In the hints below most indicators are italicized, and underlining identifies precise definitions and cryptic definitions.  Clicking on the Answer buttons will reveal the answers.  In some hints hyperlinks provide additional explanation or background.  Clicking on a picture will enlarge it or display a bonus illustration.  Please leave a comment telling us how you got on and feel free to ask for help with anything that remains unclear or wasn't covered.

1a    Large vehicle parking by Irish lake (6)
PLOUGH:  Follow the abbreviation for parking with the Irish word for a lake 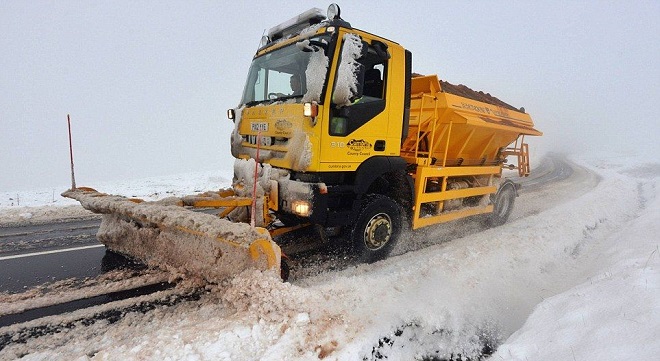 10a   Therefore, top must be reliable (5)
SOLID:  A short synonym of therefore, with a top for a jar, perhaps

11a   One who keeps records about substance almost like gold dust (9)
REGISTRAR:  The usual word for about or concerning, the substance or main point of something, and all but the last letter (almost) of an adjective describing the abundance of gold dust (or hen's teeth)

12a   Cutting remarks, primarily in bar (7)
EXCERPT:  The first letter (…, primarily) of REMARKS is inserted in bar or apart from 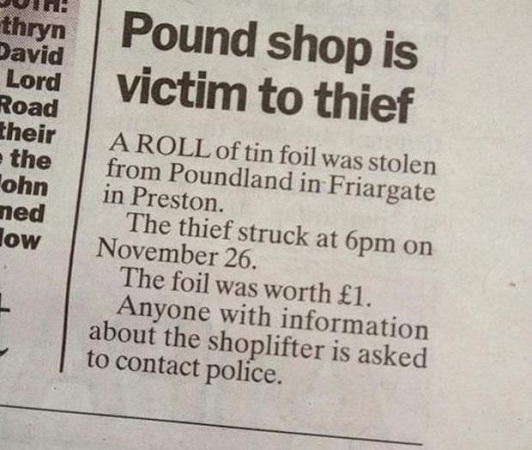 13a   Trendy little drink I had in flat (7)
INSIPID:  Glue together the usual word for trendy or fashionable, a small quantity of a drink, and the contracted form of I HAD

17a   Be uncomfortably hot right in front of kiln (5)
ROAST:  An abbreviation for right comes before (in front of) crosswordland's favourite kiln for drying malt or hops 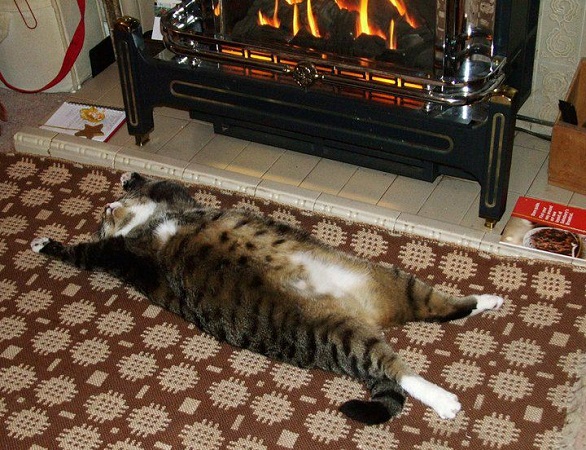 18a   Opening, working with group (5)
ONSET:  Combine working or operating with a group or collection

19a   Contest fewer in number, being without equal (9)
MATCHLESS:  A contest, in tennis perhaps, followed by a word used informally to mean fewer in number

25a   Duck swimming over shell (9)
SHOVELLER:  An anagram (swimming) of OVER SHELL 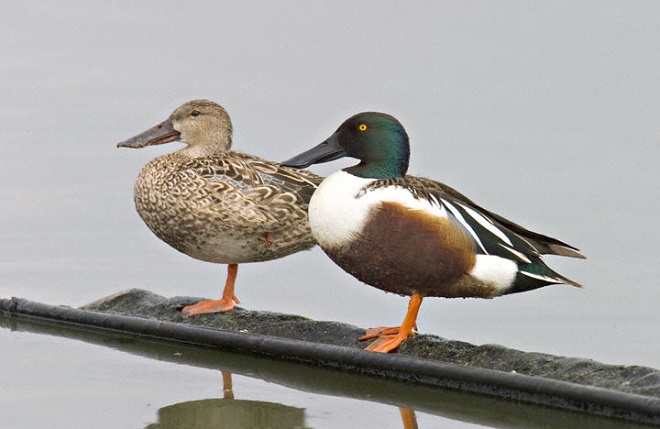 26a   Type of energy supply also run (5)
SOLAR:  An anagram (supply, here being the adverb form of supple) of ALSO, followed by the cricket abbreviation for run

28a   Chicken in yard man decapitated (6)
YELLOW:  An abbreviation for yard followed by a man who might have been jolly good before he was decapitated (i.e. had his first letter removed)

2d    Phone up about last of gladioli in bloom (5)
LILAC:  The reversal (up in a down clue) of phone or ring containing (about) the final letter of (last of) GLADIOLI

3d    Painter's work that's rarely seen? (9)
UNDERCOAT:  A cryptic definition of the preparatory layer that a painter might apply to a surface 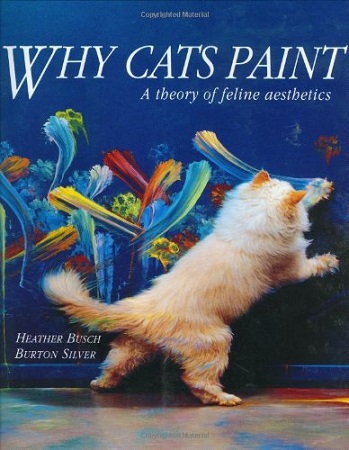 4d    World Cup hero injured netting second (5)
HURST:  No, it's not Harry.  This hero of the 1966 World Cup is found as a synonym of injured containing (netting) an abbreviation for second

5d    Nigel, clumsy chap, careless (9)
NEGLIGENT:  Glue together an anagram (clumsy) of NIGEL and one of crosswordland's many adult males

6d    Jobs -- first in there enquires (5)
TASKS:  The initial letter of (first in) THERE and enquires or queries

7d    Female and I restore hearth (9)
FIREPLACE:  Concatenate the abbreviation for female, I from the clue, and a synonym of restore

8d    Not awake when cover pulled up (6)
ASLEEP:  Cement together a short synonym of when and the reversal (pulled up, in a down clue) of the cover on an orange, for example

9d    Put down  good name (6)
CREDIT:  Two definitions.  The first a verb meaning put down or ascribe to, the second a noun meaning good name or character

15d   Ice, mostly, round Irish lake (9)
RESERVOIR:  Stick together all but the last letter (…, mostly) of ice or coolness of manner, the round letter, and the abbreviation for Irish

16d   Creature in a stream grabbing frantic duck (9)
ARMADILLO:  Assemble A from a clue, a stream or small brook containing (grabbing) a synonym of frantic, and the letter that looks like the score corresponding to a duck in cricket 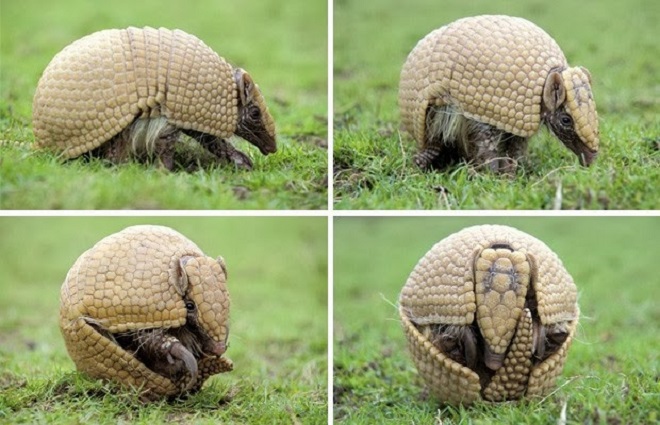 18d   Slow on the uptake, but so excited by note, finally (6)
OBTUSE:  Follow an anagram (excited) of BUT SO by the last letter (…, finally) of NOTE

20d   Crime writer tells about that woman topping husband (6)
SAYERS:  Tells or speaks is wrapped about a pronoun for "that woman" minus (topping) the abbreviation for husband

22d   Awkward writer reflected in it (5)
INEPT:  A writing instrument is reversed (reflected) and inserted in IT from the clue

24d   Volley from Slav drifting over (5)
SALVO:  An anagram (drifting) of SLAV is followed by the cricket abbreviation for over

Thanks to today’s setter.  Among many great clues, my favourite today was 5a because it's one of those clues where you assemble the ingredients as instructed and then a word pops out at the end, which is always very satisfying.  Which clues did you tick? 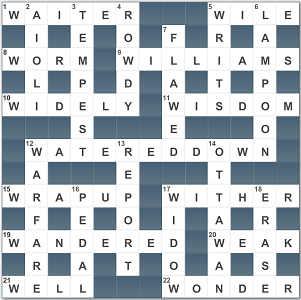 published on Tuesday, August 15 last year.  A little research found one other example of that signature feature, in 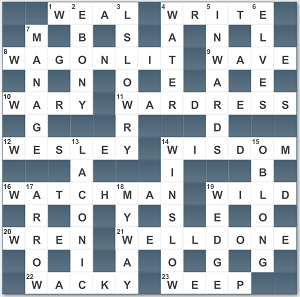 published on Saturday, November 26, 2016.  I shall have to investigate whether it's been done with other letters.