Good morning from South Staffs. Another dusting of snow in the night, followed by a bright start to the day.

We have a pangram from Giovanni this morning, with nods both to the Ashes cricket and the approach of Christmas. With the right set of General Knowledge, there are no particular problems.

1a           Bishop comes to unusual Serbian city (8)
BRISBANE – The chess notation for a Bishop followed by an anagram (unusual) of SERBIAN, giving us an Australian city.

5a           Sealing device for cleaner (6)
WASHER – Double definition: something to ensure that a joint in pipework is leakproof; or a household appliance.

10a         Pub with group of miners who provided fair entertainment? (6)
BARNUM – Another word for a pub or part of a pub, followed by the initials of the miners’ organisation once led by Arthur Scargill. The answer is a 19th-century showman who, inter alia, ran a circus in partnership with Mr Bailey. 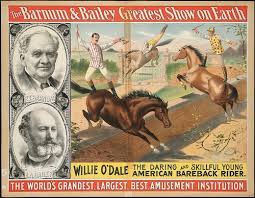 12a         Fellow attached to many different clubs (6)
CADDIE – Cryptic definition of someone carrying golf clubs for a living.

15a         The French and British soon to meet in the country (7)
LEBANON – Put together the French definite article, British, and an archaic word for ‘soon’, to get a Middle Eastern country.

20a         Criminal who robbed the rich? (4)
HOOD – Another word for a criminal which is also the surname of the legendary outlaw of Sherwood Forest.

21a         Butterfly — something flying up, keeping very quiet (7)
SKIPPER – A cricketing term for a ball hit high in the air, wrapped around the musical symbol for ‘very quiet’. 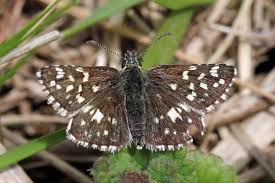 26a         Spite shown by nasty little creatures following mum (6)
MALICE – A familiar short word for mum followed by some insects which are parasitic on animals, including the human one.

28a         Obsequious host following modern miss around (6)
SMARMY – Reverse (around) the prefix used in an address by a woman who does not wish to be categorised as ‘Mrs’ or ‘Miss’, then add an armed host.

29a         Circumspection of one head backing conflict (8)
WARINESS – Put together a conflict, the Roman numeral for one, and a head or promontory.

31a         Receiver of holy letter about hostelry gets unpleasant sensation (8)
TINNITUS – One of the recipients of an Epistle from St Paul wrapped around a hostelry or pub, to give us a ringing in the ears.

1d           Ornament Edward found in stream (6)
BEDECK – The definition is a verb. Insert a short form of Edward into a Northern dialect word for a stream.

3d           Be joining skipper finally on ship — a German (8)
BERLINER – Put together BE (from the clue), the last letter of skippeR, and a large passenger ship. The answer is a German or a doughnut.

6d           More than one saw notice over long period (6)
ADAGES – The short word for a commercial notice, followed by an indeterminate long period of time.

7d           General as one who would eat human flesh hot not cold! (8)
HANNIBAL – Start with the term for someone who eats people, then change the Cold to Hot to get a Carthaginian general who brought his elephants over the Alps into Italy. 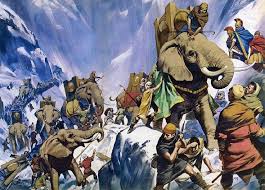 11d         Agent having imbibed drink, upset, bad-tempered (7)
STROPPY – Reverse (upset) a fortified wine from the Douro valley, and insert the result into a secret agent.

14d         Sailor on a steamship, incompetent fool (7)
JACKASS – One of the words for a sailor followed by A (from the clue) and the abbreviation for SteamShip.

17d         Stocky England batsman once in tricky test (8)
THICKSET – Anagram (tricky) of TEST, wrapped around the surname of a cricketer who came from Zimbabwe, qualified for England, and made huge numbers of runs in domestic cricket while never quite establishing himself as a Test batsman. 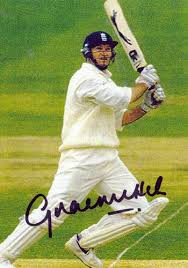 23d         Boss dismissing men is not mincing words (6)
DIRECT – Remove the military abbreviation for men who are not officers from the title given to someone on the board of a company.

27d         Christmas visitors marvellous? Not entirely (4)
MAGI – Remove the final letter (not entirely) from a word for ‘marvellous’ to get another word for the Three Wise Men. 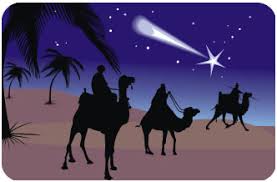