Good morning from South Staffs on a damp September day.

I fairly rattled through today’s puzzle from Giovanni, with the four long anagrams around the outside providing lots of checkers. The bottom half took a little longer than the top, but still only * for difficulty overall.

6a           Authorisation for investigation coming from chaser around with battle cry? (6,7)
SEARCH WARRANT – Anagram (around) of CHASER followed by something which, split (3,4) could be a battle cry.

8a           Form of cruelty — unhappy maiden is being imprisoned (6)
SADISM – Another word for unhappy and the cricket abbreviation for a maiden over, placed either side of IS (from the clue).

9a           Reasonable declaration looks phony with December passing (8)
RATIONAL – Anagram (looks phony) of (dec)LARATION with the abbreviation for December removed.

10a         Male or female head, not English (3)
PAT – A short name that can be either male or female. Remove the English from the end of a word for head (especially a bald one).

11a         Fellow looking forward to the match (6)
FIANCE – Cryptic definition of the male half of an impending set of nuptials.

12a         Severity of mess around road — I start to protest (8)
HARDSHIP – Wrap a mess or type of stew around an abbreviation for road, then add I (from the clue) and the first letter of Protest.

16a         Advertise concert with note that has name missing (7)
PROMOTE – One of the series of concerts held at the Royal Albert Hall in the summer, followed by (n)OTE (from the clue) with the abbreviation for Name removed.

20a         Provincial giant has one belief to fight for — against wife always! (8)
CAUSEWAY – A belief to fight or campaign for, followed by Wife and a poetic word for always. 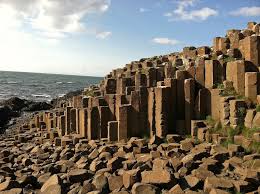 23a         A source of inspiration, daughter venturing a smile? (6)
AMUSED – Put together A (from the clue), one of the nine sources of artistic inspiration from Ancient Greece, and Daughter.

24a         Theologian embracing a member of the family (3)
DAD – The letters after the name of someone highly qualified in theology, wrapped around A (from the clue).

25a         Flag of monarch placed by watercourse (8)
STREAMER – A brook or beck followed by the regnal cypher of our monarch.

26a         It includes humour? Some miss it completely (6)
SITCOM – An all-in-one clue, where the answer is hidden in the last three words.

27a         I love routines, indisposed to change completely (13)
REVOLUTIONISE – Anagram (indisposed) of I LOVE ROUTINES.

1d           Report of people in A&E? What they’ll need, waiting! (8)
PATIENCE – The answer is a homophone (report of) of the word for people undergoing treatment in hospital.

2d           Agent set up to probe mean tricks moves quickly (8)
SCAMPERS – Reverse (set up) a short word for a commercial agent, and put it inside some mean tricks or cheats.

5d           Ministers soon restricted by Civil Service (6)
CANONS – A somewhat archaic word for ‘soon’ with the initials of the Civil Service wrapped round it.

13d         Party in which to see upper-class couple (3)
DUO – One of the usual crossword parties wrapped around the letter signifying upper-class.

15d         Regret Aussie beast being heard (3)
RUE – This word for regret is a homophone (being heard) of a short name for an Australian marsupial.

17d         A moving sort of entertainment? (8)
ROADSHOW – Cryptic definition of an entertainment that may travel to various places.

19d         Slow up, being restricted by explosive chemical (7)
HYDRATE – Reverse (up) a word for slow or belated, then wrap a two-letter abbreviation for some explosive around the result.

21d         The female wanting love but denied love is put off (6)
SHELVE – Put together the female pronoun and L(o)VE (from the clue), then remove the letter which looks like a love score at tennis.

22d         Tennis tournament Don avoids — it can be boring (6)
WIMBLE – Remove the DON from the end of a famous tennis tournament, to get the name of an unusual boring tool like a gimlet or auger.