Good morning from South Staffs where after some brightness yesterday the relentless gloom of this winter has returned. At one stage yesterday it looked as though I might have difficulty posting this set of hints, but – fingers crossed – it seems that BD and Cloudflare have fought off the barbarians again.

Another fairly gentle puzzle from Giovanni this week, with no particular obscurities, though I did hold myself up by putting the wrong second half into 8d – which made solving 11a interesting.

5a           Formula for making stew in cowboy territory (4,4)
WILD WEST – This is a reverse anagram, where the answer contains the anagram indicator (first word) and the fodder (second word) which would enable you to arrive at ‘STEW’.

10a         One caught in wind — a trying experience that’s unfair (8)
MISTRIAL – A cold wind that blows down the Rhone valley and probably annoys Jean-Luc in Hyères, is wrapped around the Roman numeral for one.

12a         The French notice someone living in another’s property? (6)
LESSEE – One of the forms of the French definite article followed by a verb meaning ‘notice’.

14a         Moving back and yielding not for the first time (8)
RECEDING – Moving back, like the ebbing tide, could also be a word meaning ‘yielding again’.

16a         Article by journalist offered opposition (8)
OBJECTED – An article or thing next to the usual crossword journalist.

19a         Urgent message when many morris men gather (6)
MAYDAY – A distress call which, split (3,3) would be a day when morris dancing traditionally takes place.

21a         French engineer offers fascinating sight reportedly (6)
EIFFEL – The chap who built Paris’ answer to Blackpool Tower might sound like (reportedly) something which is worth looking at. 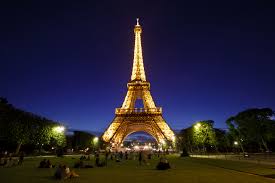 23a         Showering needed maybe after end of that? (8)
TRAINING – An all-in-one clue: the last letter of thaT followed by ‘showering’ gives us an activity which may lead to the need for a shower.

25a         Prepare for action — so that a form of quoits can be played? (5,3,5)
CLEAR THE DECKS – A command given in preparation for a naval action, which would also provide an area in which quoits could be played on board ship (though not at the same time). 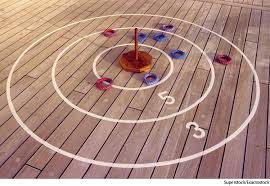 26a         Awful rage after boss indicates certain items to be worn (8)
HEADGEAR – A boss or leader followed by an anagram (awful) of RAGE.

27a         Repose with each coming in to sit somewhere else (6)
RESEAT – An abbreviation for ‘each’ is inserted into a word for repose.

2d           Feverish winter month — get cross (7)
FEBRILE – The short form of a winter month in the Northern Hemisphere, followed by a verb meaning to annoy someone or get them cross.

3d           Cut up and left gutted — praise needed (5)
EXALT – Reverse (up) a word often seen when there is a question of cuts in public expenditure, then add L(ef)T with its inside letters removed.


4d           Loss of Trident disastrous, this person held (9)
DETRIMENT – Anagram (disastrous) of TRIDENT, wrapped around the pronoun for ‘this person’.

5d           Cake seminar’s finale given by one talking imprecisely (7)
WAFFLER – A cake of leavened batter or dough (known as a gaufre in France) followed by the final letter of seminaR. 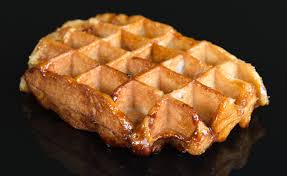 6d           Yobs — many besieging university (5)
Alternative version on Android app: Yobs given hits, having got caught out.(5)
LOUTS – An abbreviation for University inserted into a word meaning ‘many’.

Remove the initial Caught from a word meaning ‘hits’.

8d           Newspaper selling fewer copies? Dark times from now on (7)
SUNDOWN – The name of a tabloid newspaper followed by a word indicating that its sales had decreased (No, not ‘less’).

15d         Maiden on staff in company attached to the German officer (9)
COMMANDER – Start with the abbreviation for a maiden over on a cricket scorecard and a verb meaning ‘to staff’. Insert the result between an abbreviation for COmpany and a German definite article. 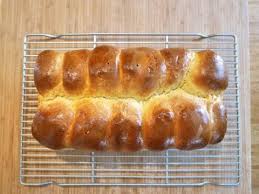 20d         Names getting muddled with one having a loss of memory (7)
AMNESIA – Anagram (getting muddled) of NAMES, followed by the Roman numeral for one and A (from the clue).

22d         River runs into track in NI town (5)
LARNE – A track or road wrapped around the abbreviation for River, giving us the port at the other end of the ferry crossing from Stranraer.