Good morning from South Staffs on a dull, grey morning. Thoughts and best wishes to our Florida contributors under attack from Hurricane Matthew.

It took me a while to get 12d, my last one in, and that pushed overall solving time up to ***. There seemd to be more double definitions than usual for Giovanni, but otherwise very much what we expect on a Friday.

6a           Keen Conservative coming in to help (4)
ACID – Another word for help wrapped around Conservative.

9a           Soldiers given official recognition — something read out (10)
RECITATION – The initials of a regiment of engineers, followed by the words of recognition that might be attached to an award for gallantry.

10a         Animals celebrated, rolling over (4)
GNUS – Reverse (rolling over) a word for celebrated musically, as these animals were by Flanders and Swann.


13a         Label for killer of pigs? (7)
STICKER – Double definition, the second referring to boar hunting on horseback with spears.

15a         I dare somehow to conceal love as travelling supporter (6)
ROADIE – Anagram (somehow) of I DARE wrapped around the letter that looks like a love score at tennis, giving us one of the travelling support staff for a touring musician.

17a         Book with more than one title (8,7)
DEBRETT’S PEERAGE – Cryptic definition of a work containing details of the noble families of Britain. 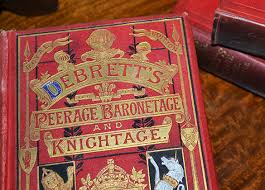 21a         Water often flows over this to submerge floor covering for Spooner (3,4)
MUD FLAT – An area subject to tidal inundation which could be a Spoonerism for a phrase (5,3) linking ‘to submerge’ and a floor covering.

22a         One little girl, the flower of Oxford (4)
ISIS – The Roman numeral for one followed by a diminutive of a female sibling, giving us the classical name attached to the Thames as it flows through Oxford.

25a         Action of one returning after journey is becoming very clear (6,4)
COMING HOME – Double definition, the first being a literal statement of what you’re doing when you return from a journey, the second being the figurative use of the expression.

27a         Delightful singing by chaps heading off (10)
ENCHANTING – Remove the initial letter (heading off) from some chaps, then add the sort of singing done by monks.

4d           Star involved with the official dogmatic statements (8,2,5)
ARTICLES OF FAITH – Anagram (involved with) of STAR, THE OFFICIAL. There are 39 of these in the Book of Common Prayer.

5d           Revolutionary’s engaging soldiers for tedious tasks (6)
CHORES – Crosswordland’s favourite revolutionary, plus the ‘S, wrapped around the abbreviation for soldiers who are not officers.

7d           Confinement of prisoners with exercise given minimal time (10)
CONSTRAINT – Put together an informal word for prisoners, a verb meaning ‘to exercise’, and Time.

11d         Quiet little man will accept order, I forecast (10)
PREDICTION – Start with the musical symbol for quiet, then wrap a short form of a man’s name around an order from a ruler and I (from the clue).

12d         Hazel has such a small bit in play, speaking only at the start (5,5)
LAMBS’ TAILS – Anagram (in play) of A SMALL BIT, followed by the first letter of Speaking. This gives us an alternative name for the catkins of the hazel tree.

14d         Bill may get such an acknowledgement (7)
RECEIPT – Cryptic definition of what you may get on settling a bill.

19d         Bribe offered by cheat upsettingly exposed in tabloid (6)
SUBORN – Reverse (upsettingly) a three-letter word for cheat or steal, and put it inside the shining star of Mr Murdoch’s tabloid empire.

20d         Old city disciple embraces a US soldier turning up (6)
SAIGON – A (from the clue) and the reversal (turning up) of a US soldier with a disciple or descendant wrapped around them, giving us the former name of a city in south Vietnam.

23d         Native American dance on island (4)
HOPI – A rather old-fashioned term for the sort of dance that might have happened in the village hall, followed by Island.

24d         Composer making request, right to interrupt (4)
BERG – A verb for ‘make a request’ or ‘entreat’, with Right inserted. This composer wrote Lulu and Wozzeck.