Good morning from South Staffs, where at the moment the sun is shining after overnight rain. We’re safely back from our French travels, and the lawn and the heap of washing have both been reduced to normal height.

There was one word (21a) which I don’t recall seeing before, but which could easily be deduced from the cluing, and the usual bit of GK, but I didn’t find anything to hold me up today. Thanks to Giovanni for the puzzle.

1a           Scholarly fellows who may communicate in writing? (3,2,7)
MEN OF LETTERS – Cryptic definition. A phrase describing (originally) literate people could also be read as describing people who communicate by post.

9a           Agent taking money abroad — I am bound to get ticking-off (9)
REPRIMAND – A shortened form of a word for a commercial agent, followed by some South African currency with the short form of ‘I am’ included.

10a         The emotions leaving a French port (5)
BREST – Remove the A (leaving a) from a part of the body said figuratively to be the seat of the emotions, to get a naval base in Brittany. 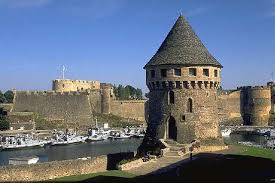 13a         Who might this be on TV? (6)
DOCTOR – This is a reference to the long-running TV series featuring Daleks, Cybermen and a police box that dematerialises.


15a         Island resident about to go inside, doing nothing (8)
INACTIVE – An abbreviation for Island followed by a resident (strictly one who was born there) with an abbreviation of the Latin word for about or approximately placed inside it.

18a         Remove religious symbol not favoured (5,3)
CROSS OUT – The first word is a familiar Christian symbol, the second can mean ‘not favoured’.

19a         Moves clumsily, say, rolling around in drinking houses (6)
BARGES – Reverse the Latin abbreviation for ‘say’ or ‘for example’, and put it inside some drinking establishments (or parts of them).

21a         Eastern chaps taking time to put things right (8)
EMENDATE – Put together Eastern, some chaps, and a particular time on the calendar.

23a         Old coin found in country river (6)
STATER – A generic word for a country followed by River, giving us an Ancient Greek coin. 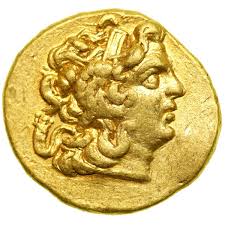 1d           See me with jolly folk help female in Copenhagen (7)
MERMAID – Put together ME (from the clue), the initials of the military organisation whose members are known (in crosswords, anyway) as ‘jollies’, and some help. You get the statue of the Hans Christian Andersen heroine found in Copenhagen. 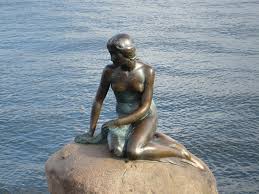 2d           Refusal to keep very quiet? That may have to be changed (5)
NAPPY – The musical symbol for ‘very quiet’ wrapped in a word of refusal, to get an item of baby clothing that has to be changed frequently.

5d           Ultimately that Heather, having drunk rum, is walking unsteadily (8)
TODDLING – The last letter (ultimately) of thaT and another word for heather, placed either side of a word meaning rum or peculiar. The unsteady walk is that of a young child rather than a drunk.

7d           Once again capturing ruler, led by soldiers, volunteers (8)
RETAKING – Put together the initials of a regiment of engineers, the former initials of what is now the Army Reserve, and a monarch.

8d           Street party set up — get mostly awful grub? (6)
STODGE – Put together the abbreviation for STreet, the reverse (set up) of one of the usual crossword parties, and the first two letters (mostly) of GE(t).

16d         Reformers sit around surrounded by maps (9)
CHARTISTS – Another word for maps, especially nautical ones, wrapped around an anagram (around) of SIT, to get the members of a 19th-century reform movement.

17d         Fit one American up with item of furniture (8)
SUITABLE – Put together the Roman numeral for one and an abbreviation for ‘American’, reverse the result and add an item of furniture. 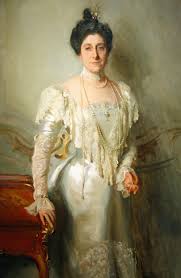 24d         Food providing energy after journey (5)
TRIPE – A journey or pleasure jaunt followed by Energy. Not a foodstuff I’m fond of. 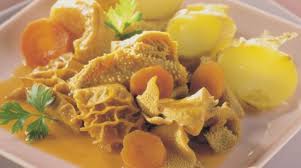 25d         I hunted in the country (4)
IRAN – I (from the clue) followed by a word which, well down the list of definitions in Chambers, can mean ‘hunted’. Fortunately, the answer is a country name, and the choice of four-letter countries beginning with I is limited.