Greetings from Ottawa where we are currently enjoying pleasant summer weather which comes as a welcome respite from a recent heat wave.

I am quite confident in declaring that this is not a RayT puzzle. Nevertheless, I did find it to be a highly enjoyable solve. I also found it to be a rather difficult solve and, with the pressure of having to write the review looming over me, I resorted to electronic help after completing about two-thirds of the puzzle. It was the upper and lower left-hand corners that I found particularly challenging. The setter certainly forces one to “think outside the box”. Even after finding the correct solution to several clues, I had to think long and hard to justify my answers.

9a   Traditional drama is grind devoid of energy? The reverse (3)
NOH — this drama is traditionally performed in Japan; take a word meaning to sharpen (a knife perhaps – or maybe one’s wit) and remove the E(nergy); then do exactly what the clue says, reverse what remains 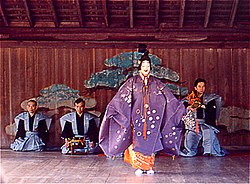 11a   Spring  fruits (6)
RESULT — double defintion; the first a verb (often followed by ‘from’), the second a noun (that might be followed by ‘of one’s labour’)

12a   Nothing to listen to on playing back band’s record (3,1,4)
NOT A PEEP — split the solution (2,4,2) and we have a reversal (playing back) of ON (from the clue), a band that the police might use to secure a crime scene, and a record that doesn’t play for very long

15a   A politician live in outskirts of Catford? It’s not a place to stay permanently (4,3)
CAMP BED — tuck A (from the clue), the usual politician, and a short word meaning to live or exist inside the outer letters of C(atfor)D

23a   Unmentionables  that could really put the wind up! (8)
THERMALS — double definition in which the latter one is a cryptic reference to atmospheric phenomena exploited by gliders — or eagles

27a   Muggins lapses now and then (3)
ASS — take a regular series of letters (now and then) from the word LAPSES; there are only two possibilities and, should you choose the wrong one, you will likely feel like the answer

1d   Have second thoughts?  Cash in (6)
REDEEM — the question mark is a key element of the first part of this double definition, which suggests this may be what leads one to atone for past bad behaviour

3d   Recorder perhaps with jury making dash in car? (10,5)
INSTRUMENT PANEL — what a recorder of the musical variety is an example of is followed by a common term for a jury

4d   Joint with punch — you’ve got a party! (7)
SHINDIG — a joint followed by a poke; the first part may not be considered a joint in anatomy class, but it is in the butcher shop

5d   Finally (and equally impressively) alto blasts tune improvised around tango (4,3,3,5)
LAST BUT NOT LEAST — anagram (improvised) of ALTO BLASTS TUNE containing (around) the letter represented by tango in the NATO phonetic alphabet

6d   Chelsea side joins cool trendy club together (4,2)
CHIP IN — a charade of the first letter (side) of C(helsea) plus a synonym for cool (or trendy) followed immediately by a synonym for trendy (or cool); can’t you just tell we are talking about Chelsea?

18d   What to wear for drizzle and pelt? (8)
RAINCOAT — I interpret this to be the style of clue that our former blogger scchua would have labelled WIWD (wordplay intertwined with definition). The entire clue suggests that we are looking for an article of clothing that would protect one in the event of either drizzle or pelting rain. However, lurking inside is a charade of a form of precipitation and what protects an animal from the elements.

22d   Keep detailed new free supplement (3,3)
EKE OUT — in this charade, the first element is an anagram (new) of KEE(p) with its final letter removed (detailed; i.e., having the tail lopped off); the second element is a synonym for free [like Mexican drug lord Joaquin “El Chapo” (Shorty) Guzman].

There are so many good clues that it is a challenge to pick a favourite – and Kath would never allow me to have multiple favourites. I enjoyed the four long fifteen-letter clues and managed to solve them all without resorting to the use of electronic aids. I also liked the four short three-letter clues — especially 14d for its elegant simplicity and suggestive surface.