Good May Day morning from South Staffs, with bright sunshine but a chilly breeze.

I took a little while to get started on today’s Giovanni, but things gradually fell into place and I picked up speed, resulting in a *** difficulty marking to begin with. Then I realised I hadn’t parsed 9a correctly, so I’ve added another *.

1a           What may hinder current freedom fighters? (10)
RESISTANCE – Double definition: an obstacle to electric current; or fighters against an occupying power.

9a           Good shield may be seen to be so expensively protected! (4-6)
GOLD-PLATED – A sort of all-in-one, where ‘GOod shieLD’ may be seen to have this expensive covering. I took ages to see the wordplay for this one. In the end I ‘phoned a friend’ and the penny dropped a couple of minutes later. Thanks to Crypticsue, who confirmed that at least two of us thought the same.

10a         Loss of title (4)
MISS – Double definition: a failure or loss; and the title traditionally given to unmarried women.

12a         Wizard beginning but not ending (4)
STAR – Remove the final letter from a word for beginning to get a wizard performer.

16a         Idiot leading part of hospital getting agreement (6)
ASSENT – A fool or idiot followed by the hospital department that turns up regularly in crosswords.

24a         Pungent root artist rejected as food (4)
DISH – Remove the letters after the name of a prominent artist from a common salad vegetable.

26a         Waste product with uranium? Region initially sealed off (4)
UREA – The chemical symbol for uranium followed by another word for a region with its initial letter removed.

27a         Journalists, ultimately you will need pay increase — nag! (10)
PRESSURISE – Put together the generic tern for journalists, the last letter (ultimately) of yoU and a pay increase. 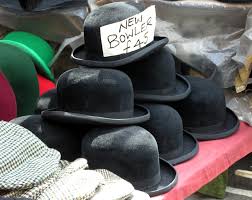 29a         Badly tainted fellows being put inside in custody (10)
DETAINMENT – Anagram (badly) of TAINTED with another word for fellows inside it.

3d           Marvellous things to read from elevated characters (12)
SUPERSCRIPTS – Another word for ‘marvellous’ and things to read if you are an actor, which may look like this.

4d           Eagerness in the manner of big town needing to entertain queen (8)
ALACRITY – The French expression for ‘in the manner of’, followed by a big town with the Latin abbreviation for queen inside it.

5d           Produce from island including apples primarily (6)
CREATE – An island in the Mediterranean with the first letter of Apples inserted.

8d           Revolution bound, they say, to be a growing tendency (6,4)
RISING TIDE – Another word for a revolution followed by a homophone (they say) of a word meaning bound or fastened.

14d         Cowardly buffoon to buzz off stifling a cry of pain (10)
SCARAMOUCH – A (from the clue) inside a word for ‘buzz off’, followed by a cry of pain, giving a stock clown from the Commedia dell’arte, often spelt with a final E.

19d         Hardly any money with repose becoming most unpleasant (7)
SOUREST – A very small old French coin, followed by a word for repose.

21d         Uncongenial house with alternative to gate in the country (7)
HOSTILE – An abbreviation for house followed by an alternative method of crossing a hedge or wall.

25d         Passion in race (4)
HEAT – Double definition, the second being a preliminary round of an athletic competition.