There’s a distinctly topical feel to this crossword from Giovanni, and indeed to the Quickie. If you have the bits of general knowledge that are required, the puzzle is quite straightforward. If you don’t, the clueing is, as always, perfectly fair, so you can work them out. 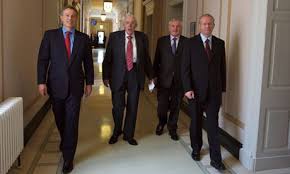 6a           I love joining army for a scrap (4)
IOTA – I (from the clue), the letter that looks like a love score at tennis, and the initials of the old name for the Army Reserve, giving the name of a Greek letter which is very small, hence a scrap or fragment.

12a         NT character stirred up by Paul’s petition (7,6)
PONTIUS PILATE – Anagram (stirred up by) of PAUL’S PETITION, giving the Roman governor of Judea who appears in the Gospel accounts of Christ’s Passion.

14a         Guy at side of street getting into the German racing vehicle (8)
DRAGSTER – A word for guy or make fun of, and the abbreviation for street, both placed inside one of the forms of the definite article in German. 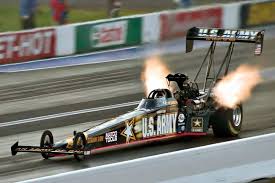 17a         Someone having terrible accident protected by vicar usually (6)
ICARUS – Hidden in (protected by) the clue. 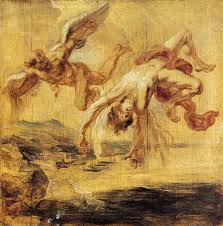 19a         Fragrant individual mislaying son was angry (8)
PERFUMED – Remove the SON from a word for an individual, and add ‘was angry’.

21a         Head of Finance probing finer details sorted out elements of pay structure (13)
DIFFERENTIALS – The initial letter (head) of Finance inserted into an anagram (sorted out) of FINER DETAILS, giving the subject of many interminable Trade Union disputes in years gone by.

24a         Undertaking limited by very big mistakes maybe (9)
OMISSIONS – The abbreviation which may be found on very big clothing, wrapped around the five-year undertaking of the USS Enterprise in Star Trek.

25a         Man with skill going the wrong way in traffic (5)
TRADE – The definition here is a verb. Put together a short form of a man’s name and a word meaning ‘skill’, then reverse the lot.

27a         One keeps on the move in sporting rally (6,4)
TENNIS BALL – Cryptic definition of something which has to keep moving for a rally to take place at Wimbledon or Flushing Meadow.

2d           Plain exhibition centre in the capital (7)
OLYMPIA – Double definition, the first being a site in Greece where a famous set of games originated.

3d           Perhaps we are mystified by these objects being thrown in domestic quarrel? (6,7)
FLYING SAUCERS – You might see these in the air if spouses are throwing crockery at each other. 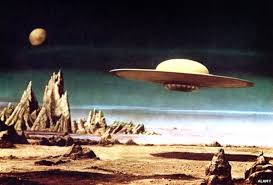 4d           Supposed confession of one opposing journalist (8)
IMAGINED – A phrase (1’1,4) which might be uttered by someone opposing a proposal, followed by the usual journalist.

7d           Nero apt to fiddle — behaviour of psychological significance (7)
OPERANT – Anagram (to fiddle) of NERO APT. New word of the week for me. According to the BRB it is a term in psychology which describes behaviour that is spontaneous rather than responding to a stimulus.

8d           Liable to get fired soon, interfering with cash? (2,3,5)
AT THE READY – A phrase describing a weapon ready to be discharged, made up of a phrase meaning ‘interfering with’ (as in ‘the mice have been — — cheese again’) and a slang term for cash.

13d         Man of mystery drowned, I do suspect (5,5)
EDWIN DROOD – An all-in-one clue describing the eponymous hero of Dickens’ unfinished novel. Anagram (suspect) of DROWNED I DO.

16d         Black is embraced by fashionable people? Junk! (8)
JETTISON – The definition is a verb. Put together the black substance for which Whitby is famous and a three-letter French word for fashionable people with IS (from the clue) inside it.

18d         Performance involving two females left this person in distress (7)
AFFLICT – Put together two instances of the abbreviation for Female, Left, and the pronoun for ‘this person’, then wrap a stage performance around the result.

22d         Pole caught in extremes of extreme weather (5)
ERODE – A pole or perch inside the first and last letters (extremes) of ExtremE.