Hola from the Vega Baja where it’s a beautiful sunny morning but a bit too chilly for blog-writing outside.  You all know my track record in spotting setters but, for once, I’m going to stick my head above the parapet and say that this one is a RayT.  I know we had one last week but this has all the hallmarks – there’s a little bit of innuendo, no clue more than eight words, a couple of hidden answers (just for Kath), an initial letters clue and Her Majesty makes an appearance. On top of that I’ve just had a peek at the Quickie and all the clues are single words. I rest my case.

RayT or not it’s a bit tricky in places, and I slipped into *** time, but there are enough gimmes and anagrams to get you going. However, I found it very entertaining with a few ‘D’oh!’ moments so I’ll be interested in your views.

As usual the ones I like most are in blue, definitions underlined in the clue and the answers hidden under the click here buttons.  Please leave a comment telling us what you thought. You can also add your assessment by selecting from one to five stars at the bottom of the post.

7a           Craft with single course facing empty seas (8)
WILINESS: This isn’t a boat but craft as in cunning. It’s a charade of W(ith), I (single), a word meaning course or direction (4) and S(ea)S (empty).  I’m always happy when the first across clue goes straight in but today I was not happy.

12a         Bands making collections for speakers (6)
HORDES: These bands are large groups of people and they sound like (for speakers) collections of stuff that have been squirreled away.

14a         Spread some caramel on gateau (8)
ELONGATE: It’s one of the hidden answers. You’ll spot it if you look carefully enough.

15a         Upset since originally trapped in fly, perhaps (6)
INSECT: Anagram (upset) of SINCE followed by a T (originally Trapped). I thought it was fair but a bit sneaky putting the wordplay indicators before the fodder. I spent some time trying to put an S (Since originally) into (trapped in) some sort of fly to get a word meaning upset, D’OH!

17a         Explosive dissolved before detonator’s top fired (6)
HEATED: Fired or, at least, warmed up.  It’s an abbreviation for High Explosive followed by a word for dissolved or corroded and then a D (Detonator’s top).

20a         Cut both sides of tree sheltering last animal (8)
TRUNCATE: You need a T and an E (both sides of TreE) and insert (sheltering) and word which can mean to last and an animal much beloved of pommette. Took a while to work out under what circumstances the word means to last but got there in the end.

22a         Continental appetiser nibbled at party events initially (6)
CANAPE: First letters (initially) of every other word in the clue.

23a         Ran despite boils on foot (10)
PEDESTRIAN: Anagram (boils) of RAN DESPITE.  I’m not usually a great fan of anagram clues but the surface of this is just brill.

24a         Turn using second gear (4)
SKIT: Turn as in a short turn or act on a stage, usually a satirical one. It’s S(econd) followed by some gear or equipment.  Here’s one of these from Monty P.

26a         Sailor one predicts sheltering at a distance (8)
SEAFARER: Not AB or TAR this time, the sailor finally gets to be the definition. Take a word for someone who makes predictions and insert (sheltering) a word meaning at a distance.  We’ve already had this insertion indicator in 20a. 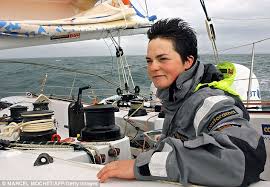 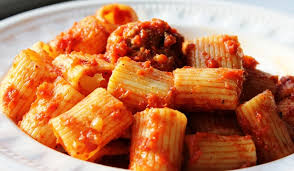 3d           Lovers usually embracing, playing (6)
VERSUS: This is the other hidden answer.  It’s playing as in playing against.

8d           Is raised by practically strict nun (6)
SISTER: IS reversed (raised in a down clue) followed by a word meaning strict without its last letter (practically). 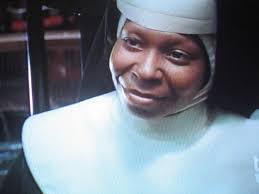 13d         Refuse to leave the house? (10)
DISINHERIT: A cryptic definition of what you would do to refuse to leave someone your house (or anything else for that matter) in your will.

18d         In need, hurried to acquire record by Queen (8)
DEPRIVED: Start with a word which can mean hurried and insert (to acquire) and old type of record and R(egina).

19d         Disguises guts, lifting middle (6)
BELIES: A word used to describe the guts or stomachs of heavy beer drinkers with the centre letter missing (lifting middle).  I’m trying to lose some of mine at the moment, The trousers have all gone tight since Christmas.

21d         Staggered about dinghy’s prow catching fish (6)
REELED: You need an abbreviation for about followed by a D (Dinghy’s prow) and insert (catching) a long thin fish.

22d         Container vessel’s docked, and sails (6)
CANVAS: A container where you find baked beans followed by a vessel where you find cut flowers without its last letter (docked) gives you a generic term for the sails on a sailing vessel. Yachtsmen still use this term even though their sails are more likely made of Kevlar.

24d         Beneath ocean is large marine creature (4)
SEAL: Put an L(arge) beneath not an ocean but a large expanse of salt water to get a creature that lives in it. I used to see a lot of these around Puffin Island when I sailed out of Conwy but very few puffins, surprisingly, although I believe these are now re-establishing themselves because the rats have been eradicated from the island.