An enjoyable quickie from Jay, with 1*/3* for difficulty/enjoyment. Thanks Jay.

{GROPED} : [bound;literally tied up] placed after(to chase, in an across clue) the 1st letter of(source of) “growth “.

{DISPATCH} : [abbrev. for a detective rank in the police]‘S + [a well-defined area, say, for growing, eg. vegetables].

Answer:   Whence, possibly, this pre 60s dancer sans leis…and the message is in the body movements. 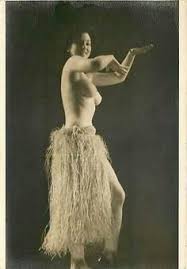 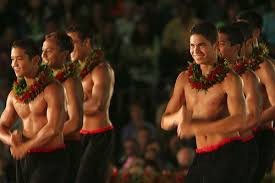 {CORNEA} : [wow!;a British exclamation of amazement or surprise] + [close by] minus its last letter(finishing early).

Defn: Part of what you use to see with.

11a    Lacking principles, without time for God, for example (8)

Defn: A being not subject to death.

12a    Hydrogen planet that could be considered home! (6)

{HEARTH} : [chemical symbol for the element, hydrogen] + [planet not a million miles from us].

Defn: Part of a fireplace symbolising the home.

{OVERSHOT} : [filmed;took videos] placed after(by, in an across clue) [a paramour;a darling, especially an illicit one] minus its 1st letter(topless).

{PEAR} : [a gem produced by an oyster] minus its last letter(mainly …).

Fruit where a gem should be:

{ESCALATE} : Anagram of(new) CASE + [behind schedule, something you might not want to hear your paramour say she is].

{SWATHE} : [abbrev. for that part of England that includes Cornwall] + “rather ” minus its 1st and last letters(unprotected).

{DOGMATIC} : [animal that a setter is an example of – this one doesn’t set crosswords] plus(with) [abbrev. for a post-graduate degree] plus(needing) [financial credit to buy first, pay later] minus its last letter(endless …).

22a    University that in Spain is unparalleled (6)

{ROTATION} : [a people under a single government] minus its 1st letter( losing head ) placed after(after, in an across clue) [rubbish;nonsense!].

24a    Over-zealous people or footballers with strange antics (8)

{NICKED} : Double defn: 1st: … by the police; and 2nd: Slang for what someone possibly did, resulting in being collared.

{ROOMMATE} : [opportunity;scope to do something, eg. to manoeuvrre] + [any deck officer below the master on a merchant ship].

{DAUNTLESS} : [abbrev. for “daughter”] + [with no female relations;having no parents’ sisters, in particular].

{DOUBLE STANDARDS} : [a format for a tennis match, relating to the number of players] containing(embracing) [conventional;non-customised].

7d    Terribly deferential lad missing in island in the Atlantic (8)

{ORANG-UTAN} : [called on the phone] contained in(taken in by) { [published;not secret any more] + [an article in grammar] }.

{HOT STUFF} : [slang for “recently stolen”, with the authorities on the lookout for] + [items in general].

{ABRASION} : [variant of the article “a”] + [a section of the orchestra that includes trumpets, trombones, etc.] minus its last letter(finishing early) + reversal of(… up, in a down clue) { NO + [Roman numeral for “one”] }.

{ANTIDOTE} : Cryptic defn: Reference to something that might [counteract;go against] [what a love potion will make you do;love excessively]. A nice surface and WIWD (wordplay intertwined with definition) clue.

Click to reveal the components of the pun.  BD