Good morning from a storm-ravaged Devon – the weather has got steadily worse since John Kettley retired!
I enjoyed this Osmosis Toughie (in spite of the two animals which I had to work out from the wordplay and then look up) although I didn’t like 20a. The enumeration helped a lot with the four peripheral English towns but I imagine that these caused a few difficulties for solvers abroad.

Do let us know how you got on and what you thought of the puzzle.

1a  Workers at new flyover drilling here could be a source of angry letters? (9,5)
{TUNBRIDGE WELLS} – according to popular belief this town in Kent is full of ultra-conservatives who are forever firing off letters to newspaper editors expressing their disgust at some aspect of modern life. It’s a charade of the abbreviation for a workers’ organisation, N(ew), another word for a flyover and sites of drilling operations.

10a  Overworked pair of journalists hold back hunger (9)
{HACKNEYED} – two different terms for a journalist containing a hunger or urge reversed.

12a  Upstart‘s article in L’Equipe against musical genre having been rejected (7)
{PARVENU} – L’Equipe is a French paper so it would use a French indefinite article. Add the abbreviation for against (in football fixtures, for example) and a sort of musical genre then reverse the lot.

13a  Bear far right in York, then right over A1 at Duke’s Head westbound (6)
{KODIAK} – this is, so I’ve found out, another name for a type of large grizzly bear living in the southern parts of Alaska. Start with the rightmost letter of York then add an expression of acceptance or agreement (right!) containing the reversal (westbound) of AI and the first letter of D(uke).

15a  Religious leader, self-proclaimed Alpha male? (4)
{IMAM} – this religious leader could announce himself to be our equivalent of the Greek letter alpha and the abbreviation for male.

17a  Admirer causes commotion after a romance, having lost heart (10)
{AFICIONADO} – a word for commotion or fuss follows A and a make-believe narrative without its central T.

18a  Message for someone in butcher’s  to be fired? (3,3,4)
{GET THE CHOP} – double definition, the first what someone sent to the butcher’s on an errand might be told.

20a  Some random e-mail that’s returned? (4)
{MEMO} – this has to be a sort of all-in-one although for me it’s not very convincing as a definition. The answer is hidden (some) and reversed (returned) in the clue.

22a  Rabbit on against runners starting 400m (3-3)
{OAR-LAP} – this is a term, totally new to me, for a rabbit with ears sticking out at right angles to its head. The starting letters of three words in the clue are followed by what 400 metres constitutes at an athletics track.

23a  Jerk‘s in 50 per cent of the West Indies diet, ultimately (7)
{HALFWIT} – string together the fraction that corresponds to 50 per cent, the abbreviation for West Indies and the ultimate letter of (die)T.

26a  Mark, sometimes on keyboards, is fifty during season (5)
{TILDE} – insert the Roman numeral for fifty into a poetic term for season or time. 27a  Fruit‘s popular in small hotel (9)
{AUBERGINE} – insert an adjective meaning popular or trendy into a small hotel in French-speaking countries.

28a  Somewhere in Bucks partner nurses Glen, drunk on latest booze (7,7)
{NEWPORT PAGNELL} – this place is best known for being the location of a motorway service station (the first one in the UK to be open to all types of traffic). A partner or mate contains (nurses) an anagram (drunk) of GLEN and all that follows (on) an adjective meaning latest or modern and a type of alcoholic drink. 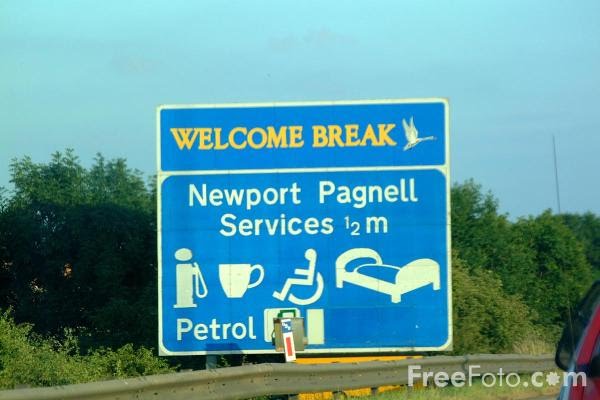 3d  Fatty cake bird’s not finished (6)
{BUNTER} – this is the fictional character known as ‘The Fat Owl of the Remove’. Join together a type of cake and a seabird without its last letter.

5d  Where theatre-goers watch  their idols? (4)
{GODS} – double definition, the first being the cheaper seats in a theatre.

7d  Gents perhaps heard Tom tucking into cheese supply with booze (9)
{LUBRICATE} – start with what sounds like (heard) what Gents is an example of, then insert what a tom is into a French cheese.

9d  Cotswold location that’s used to identify broadcaster like J.Ross? (8,6)
{CHIPPING NORTON} – a security measure (**** and ***) used to identify the rightful owner of a credit or debit card is followed by the name (in the same format as J Ross) of another broadcaster and chat show host.

14d  Vintage cooker found, raiding capital regularly — no problem for high-flier (10)
{ACROPHOBIA} – a vintage or harvest and the top bit of a cooker get inside (raiding) the even letters of capital.

16d  Following lovemaking’s ultimate high, is it this? No and yes (9)
{AFTERGLOW} – the BRB rather coyly defines this as ‘pleasant residual feelings following an experience’. The whole clue more or less defines it (indicated by the ‘yes’ response to the question). A preposition meaning following is followed by the ultimate letter of (lovemakin)G and the opposite (no) of high.

19d  Cry of exertion‘s made putting key into own house (5-2)
{HEAVE-HO} – insert a musical key into a verb to own and the abbreviation for house.

21d  Breadmaker, out of uniform, accepted old currency (6)
{FLORIN} – an ingredient used in making bread loses the letter that Uniform represents in the Nato Phonetic Alphabet. After that we need an adjective meaning accepted or favoured by.

24d  Quick dance from old politician, no good with hands (5)
{WHIRL} – a member of an old political party loses the final G (no good) and that’s followed by both hands.

I liked 1a and 6d today but my favourite was 9d. How about you?