In response to a number of requests, I have added a page, The Usual Suspects, to the Crosswords section of the blog.  This lists some of the wordplay elements commonly used in cryptic crosswords.  I hope it proves to be useful, especially to newer solvers.

As is usual for the weekend prize crosswords, I will select a number of the more difficult clues and provide hints for them.

Most of the terms used in these hints are explained in the Glossary and examples are available by clicking on the entry under “See also”. Definitions are underlined in the clues.

12a         Be embracing novel gold bar idea — as opposed to plastic, for instance (13)
BE outside (embracing) an anagram (novel) of gold bar idea gives a word meaning having the quality of being able to be broken down by bacteria, unlike plastic

14a         Serve two couples holding hands in a corner, finally (6)
This verb meaning to serve or fulfil is derived by putting two pairs of bridge partners (couples) inside the A from the clue and the final letter of corneR

27a         Is single, occupying dull accommodation (10)
IS and a three-letter number that represents a single inside an adjective meaning dull 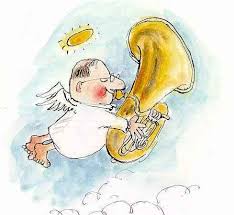 4d           Oriental cut European flower for festival (6)
It looks like Virgilius couldn’t make his mind up as we have two separate pieces of wordplay!  Either drop the final letter (cut) from an adjective meaning oriental or combine E(uropean) and a flower

8d           One of those competing in uniform, including half of team (10)
An adjective meaning uniform around the first half of TEam

13d         Reverses under shade in these vehicles (10)
A verb meaning reverses preceded by (under in a down clue) a verb meaning to shade with fine, usually diagonal, lines

20d         Aesthetically unconventional daughter’s on a platform on time (7)
D(aughter) followed by the A from the clue, a platform and T(ime) Highlighted words are to be found in my new “Usual Suspects” page.